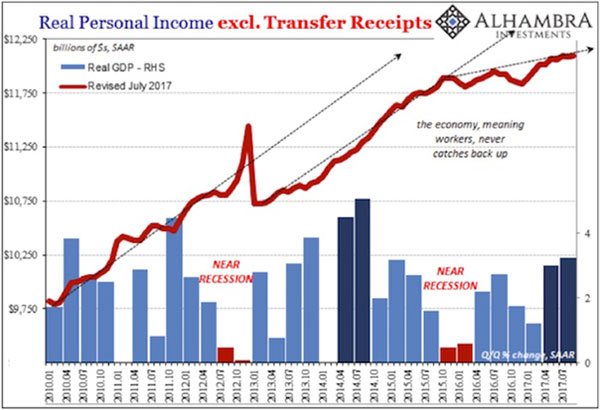 My long-time Thoughts from the Frontline readers know that I’ve long criticized economists for treating their profession as a “hard science” like physics or chemistry.

The global economy is far too complex and far too dependent on irrational human behavior for that ambition to be realized. However, there are some occasional similarities.

Think back to high school science. Remember Newton’s Laws? The first one is about inertia and motion:

An object at rest stays at rest, and an object in motion stays in motion, with the same speed and direction, unless some other force intervenes.

In similar fashion, an economy that is moving in a particular direction will probably continue in that direction until something makes it change. Either the forces that put it in motion lose strength, or other forces counteract them.

My friend Sam Rines gives us a wonderful illustration of that basic principle.

The following is a graph of nominal GDP growth for the last six years.

But don’t get excited too early.

Normally, when we talk about GDP numbers, we talk in terms of real GDP, or GDP with inflation backed out. Even though there are various measures of inflation, real GDP growth measures the actual buying power of your dollars.

There is a great way to illustrate the difference between real and nominal GDP growth.

Not exactly what your financial planner was forecasting for you in your retirement plan.

Forecasting what your portfolio will look like in a reasonable length of time, say 10 or 20 years, all depends on your starting point. If you happen to be part of the demographic that allowed you to start in 1982, you look brilliant. If you began in 1966 instead? Not so much.

So while nominal income is growing, real personal income, while it has grown modestly over the last seven years, has begun once again to flatten. This chart courtesy of Jeff Snyder at Alhambra.

I think the US economy will maintain its current slow but steady growth, because no greater forces are likely to stop it. I don’t mean to suggest that no other forces exist; they certainly do.

But they will either balance each other so that there is no net change, or they will come at us from outside in unpredictable fashion.

I am not, however, predicting smooth sailing for the stock market. The economy and the stock market are different animals. The equity markets face serious challenges and will endure a reckoning at some point.

In fact, 2018 could be our last calm year for some time, so we need to use it constructively.

That said, if you have large open gains in some of your holdings and you’re a bit concerned about them, you might want to cash in and buy back at lower valuations.

One way or another, I suspect we’ll see a significant correction at some point in 2018. It has been so long since we’ve had a correction that we’re due for one.

Corrections can happen anytime, not just in the midst of economic weakness. Frankly, I think it would be healthy for the Dow to back down by 10% or so. That kind of correction would skim off some of the froth and give new entrants a lesson in humility.

I would treat any such weakness as a buying opportunity, especially for stable, dividend-paying companies. You might be able to lock in some good yields.

A correction or even a bear market (a 20% drop in the market indexes) that isn’t accompanied by a recession becomes a V-shaped recovery in the market prices. Think 1987 or 1998. Bear markets during recessions are ugly in that their recovery periods are long.

The even bigger opportunity might be in high-yield bonds. They’ve not yet begun to retreat. If we get into a real fear-based market that thinks recession is coming, I think we’ll see 15% yields in the junk bond segment. They’ll get even better if recession actually appears.

You see opportunities like this in the high-yield market only every 15 to 20 years. When they emerge, you have to put aside your fears and buy for the longer term. The technical charts show nothing but down when that pattern does happen. But a 15% yield and almost 50% capital gain can make that trade a meaningful addition to your portfolio.

If you’re holding stocks, investment real estate (as opposed to income real estate), or even more nebulous assets like Bitcoin, I would seriously consider taking some profits in early 2018, with an eye toward getting back in at lower prices when we get a decent-sized correction.