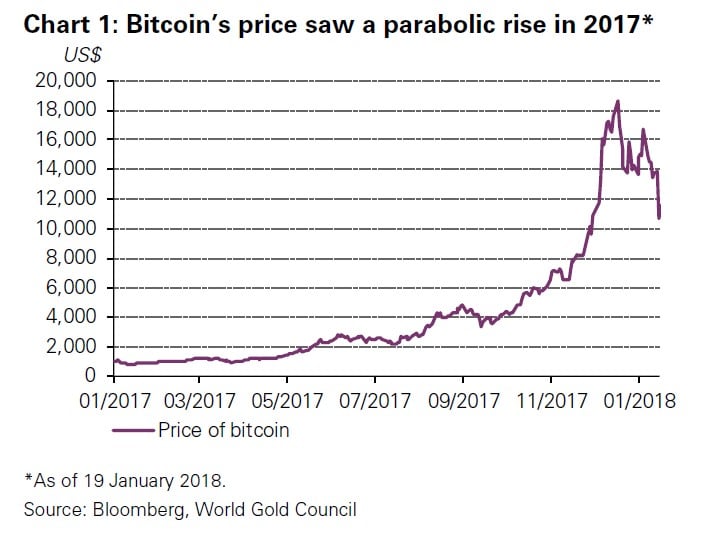 Bitcoin’s parabolic price rise was the big story of 2017 – putting the spotlight on the cryptocurrency market. While gold’s performance was a solid 13%, it was a fraction of the 13-fold increase of bitcoin by the end of the year. Some commentators went as far as to claim cryptocurrencies could replace gold. Cryptocurrencies may become an established part of the financial system. But, in our view, gold is very different from cryptocurrencies, as gold:

These characteristics underpin gold’s role as a mainstream financial asset that will likely continue to resonate in today’s digital world.

When gold was used to back currencies, the gold price appreciated roughly at the rate of inflation. Since the collapse of Bretton Woods in the 1970s, gold has appreciated 10% per year, on average. While its price increased rapidly in the late 1970s, its price volatility has been relatively tame over the past four decades.

Bitcoin, the most widely recognised cryptocurrency, has had rapid price growth over the past few years – increasing 13-fold in 2017 alone (Chart 1). Its price has also been extremely volatile – some 10 times that of the dollar-denominated gold price. Bitcoin’s high volatility was evidenced by the sharp price correction it has experienced since mid-December 2017 – falling by more than 40% in a month.

Bitcoin moves, on average, 5% each day, a level that is nearly as high as the realised volatility of the VIX itself (Chart 2).

While this is good for investors looking for extremely high investment returns, it is hardly a characteristic of a currency, let alone a store of value, potentially limiting bitcoin’s use as a transaction token. 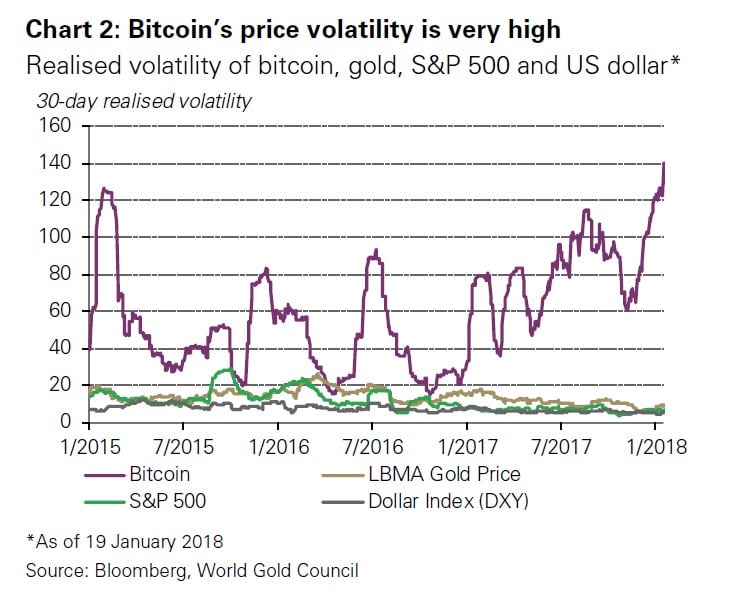 Cryptocurrencies do not have a clear two-way market. Reports suggest their volume is driven by buy-and-hold investors, but, so far, they lack the characteristics common to most liquid markets with the ability to short large quantities. In addition, anecdotal evidence suggests there are high transaction costs for selling positions – both in monetary terms and in the time it takes for the transaction to settle.
Despite the current size of the cryptocurrency market, which has been estimated to be valued at over US$800bn, volumes are very low compared to gold and other currencies. Bitcoin trades US$2bn, on average, a day, which is roughly equivalent to the world daily trading volume of gold-backed exchange-traded funds (ETFs). This volume, however, is less than 1% of the total gold market that trades approximately US$250bn a day.

The sources of demand for gold are very different from cryptocurrencies. Gold has a 7,000-year history as an asset and a long-standing role as money. It is owned by central banks, as well as institutional and retail investors. Yet, it also has a large and diverse attraction as jewellery, which remains the largest source of demand – typically representing between 50% and 60% of annual demand over the past 20 years (Figure 1). Large parts of gold’s demand are deeply embedded within cultural and religious beliefs, especially in India and China. Also, gold is a tangible good, with real technical applications – gold is even used in the computer chips that ‘mine’ bitcoin.

In contrast, bitcoin and other cryptocurrencies are designed to be used as tokens in electronic payment systems. These may have potentially useful characteristics. For now, however, the opportunities to spend bitcoin are rather limited, and genuine transactions are quickly converted into fiat currencies due to bitcoin’s price volatility. 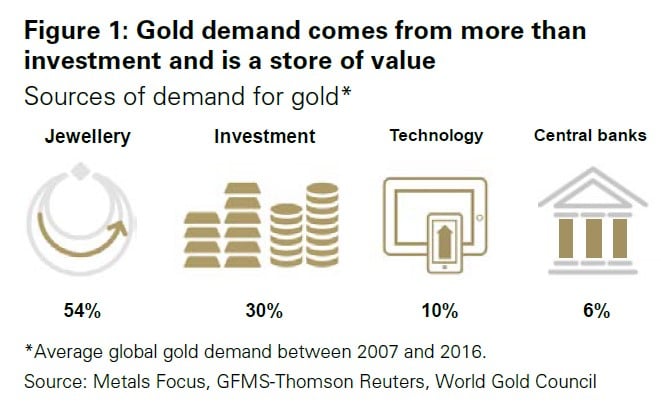 At a high level, there are some similarities between the supply profile of gold and cryptocurrencies. The stock of bitcoins, for example, increases in number at a rate of approximately 4% per annum, and is engineered to slowly decline to zero growth around the year 2140. While gold can be mined without a date limit, its production rate has been quite small and steady. Approximately 3,200 tonnes of gold have been mined on average, each year, adding about 1.7% to the total stock of gold ever mined. Bitcoin’s future diminishing growth rate and ultimate finite quantity are clearly attractive attributes, as is gold’s scarcity and marginal annual growth (Chart 3).

Gold, however, benefits from a price-responsive recycling market. Since 1995, recycled gold – that is primarily jewellery sold by consumers for cash – accounts for around a third of total supply. When gold prices rise, some consumers take advantage of the appreciation by selling their gold. This helps maintain balance in the gold market and contributes to lower price volatility.

Another similarity between gold and cryptocurrencies is that they are not government-issued units of exchange. However, unlike gold, bitcoin is not unique as a blockchain application. The many cryptocurrency alternatives beg the question of whether a newer, better blockchain-based coin application may be equivalent to increasing supply, not unlike fiat currency. 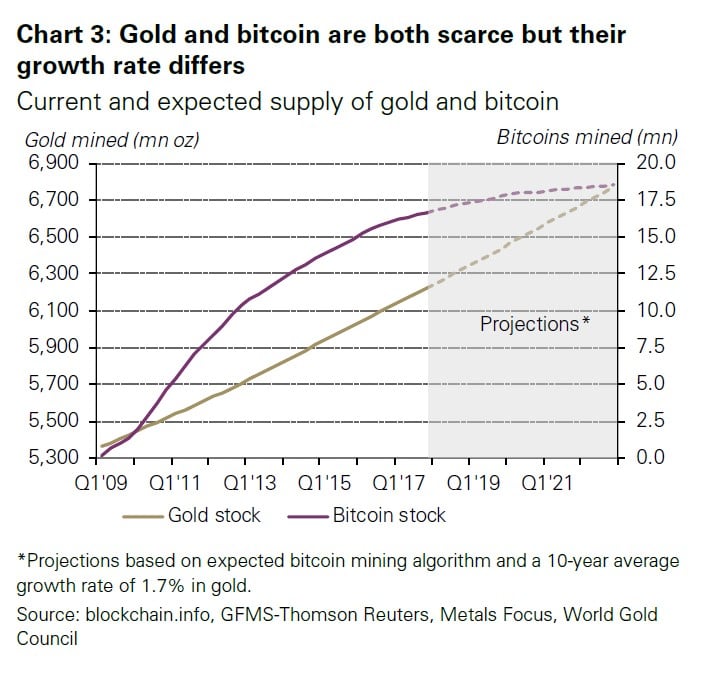 Trade in gold is widely authorised and regulated in many markets. Cryptocurrencies are broadly permitted, in that most countries have deferred granting them approval, while not banning them – although there are a few outliers at both extremes – Japan appears to have granted approval, and China has greatly restricted their use.

Some commentators have suggested bitcoin and other cryptocurrencies are at great risk of sudden restrictions from countries concerned about capital flight, investor protection, or loss of seigniorage. For example, South Korea, one of the world’s largest cryptocurrency markets, has announced more regulatory measures. And in the UK, investors are facing hurdles to convert cryptocurrencies.

Monetary policy is a key central bank tool today. If people choose to transact in cryptocurrencies instead of fiat currency, it might make monetary policy less effective and undermine the tools used by the Fed and other central banks to influence the economy and prompt the government to regulate these products.

As it stands, from a US tax perspective for example, each transaction of cryptocurrencies is considered an asset sale according to US Internal Revenue Service (IRS) rules and should be reported as a gain or loss. This complicates transactions with retailers like Amazon, Target and Wal-Mart, which do not currently allow cryptocurrencies for transactions. In fact, many retailers have dropped support for bitcoin because so few people are using it to transact. This brings us to the point of whether cryptocurrency is being used for transactions or if it is traded and held more as a speculative investment.

Despite anecdotal comments from well-regarded financial commentators that gold prices and gold demand are suffering at the expense of cryptocurrencies, there isn’t any quantifiable evidence that gold holdings are directly suffering from competition from cryptocurrencies. The weakness in physical demand in 2017 – for example, the paltry sales of US Eagles – is largely explained by the steady march higher of the S&P 500. Other established gold markets – such as China – saw healthy levels of demand. Overall, the level of the gold price in 2017 appears to be consistent with drivers of the past few years and is showing no signs of suffering from crypto-competition.

Another factor to consider is competition within cryptocurrencies themselves. There are currently over 1,400 cryptocurrencies available (Chart 4) and, while bitcoin is the largest by far, new technology could have devastating effects on the value and supply of any of the cryptocurrencies, including bitcoin. 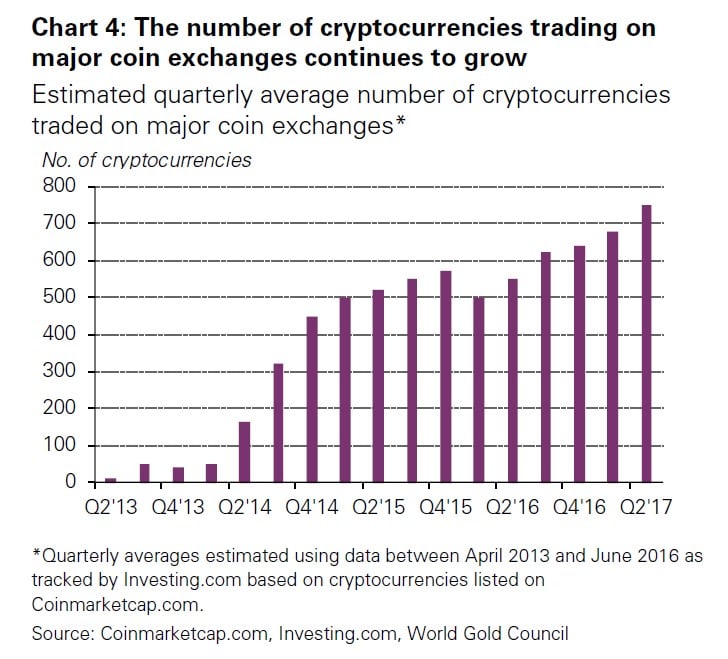 Blockchain technology, the distributed ledger mechanism that underpins cryptocurrencies such as bitcoin, is genuinely innovative and could have wide-ranging applications across financial services and beyond. In the gold market, various players are exploring blockchain in the context of transforming gold into a ‘digital asset’, tracking gold provenance across the supply chain, and introducing efficiencies into post-trade settlement processes. Such applications are typically built on private blockchains operated by trusted parties rather than using bitcoin or other ‘public blockchains’.

Gold as a strategic asset

In our view, bitcoin and cryptocurrencies more generally are not a substitute for gold. Gold is a tried and tested effective investment tool in portfolios. It has been a source of returns rivalling that of the stock market over various time horizons; it has performed well during periods of inflation; it has been a highly liquid, established market; and it has acted as an important portfolio diversifier, exemplifying negative correlation to the market during downturns.

Cryptocurrency’s performance has, until recently, been remarkable, but its purpose as an investment seems quite different from gold. Cryptocurrencies have yet to be tested in multiple markets. Since bitcoin’s inception, the stock market has been in an incredibly low volatility, trending, bull market, with very few pullbacks. The crypto-market is young, and liquidity is scarce. Its price behaviour at this point, while still attractive to many investors, seems to be driven by high return expectations.