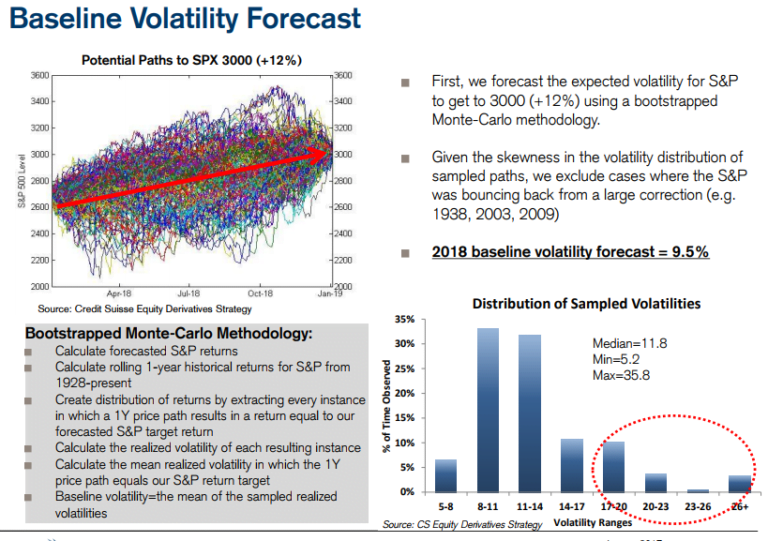 Add Credit Suisse’s Mandy Xu, head of equity derivatives strategy, to the list of those inclined to think volatility will generally remain in a trading range in 2018. Like many derivatives thinkers, however, she doesn’t look at the world from the standpoint of absolutes, but rather probabilistic outcome potentials. It is here where she considers a volatile world that could upset tranquil markets.

Low volatility and the trading strategies around it have been the cause of much consternation. Short volatility is now considered the most crowded trade, according to a recent Bank of America Lynch study. There have been notable frauds surrounding the strategy to be sure.

Judging by vocal opposition to the strategy noted in articles, at conferences and random comments on Twitter by traders, it is one of the industry’s most violently despised strategies. But at the same time, there is a mathematical viewpoint that considers volatility remaining in a trading range and mean reverting even after a crisis event, thus supporting a short volatility approach, particularly just after crisis.

Traders of volatility look to model various outcomes and take both long and short positioning all the time. Credit Suisse’s Xu, for instance, thinks 2018 might not be the year of the “bang,” but rather “a whimper.”

She expects low volatility to continue, with the medium VIX level expected to average near 12.5 in 2018, up from 11 in 2017. While there is a projected rise in volatility – and there could be occasional volatility shocks during the year as is often the case – the mean reversion won’t be dramatic.

Xu breaks down performance drivers based on “structural skew,” considering the source of supply and demand. As the CBOE VIX has matured, the core market construct driving demand has changed, Credit Suisse studies show. Volatility funds were only 10% of the VIX demand in 2017, where they were 30% in 2015. Asset managers, who have different economic motivations, were only 10% of the volume in 2015 but now comprise 35% of all VIX trades. The changing dynamic from a demand driver based on trading to one based on hedging risk has corresponded to a time when volatility is near all-time lows.

Xu doesn’t just break down her modeling and layout an argument for a particular viewpoint, but also looks to poke holes in her thesis, figure out what could go wrong. And it is her a host of nightmare situations appear on the risk radar. 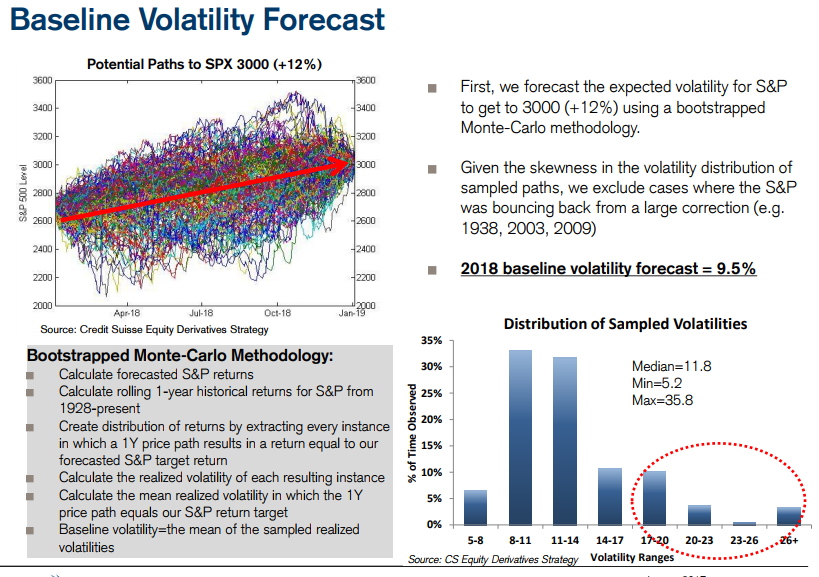 Looking at the potential for her forecast to be wrong, a key point in derivatives risk management analysis, Xu looks to the political world and recognizes fireworks potential, but given her average VIX level expects volatility to mean revert when it does rise.

Number one on Xu’s list of risks to watch will be found on the yield curve, where quantitative dopamine has provided negative real rates, an addictive stimulus that Fed Chair Yellen was in the process of removing.

There are several wildcards that can come into play under a sharply higher rate environment which Xu considers as one of several possibilities. Inflation could return, particularly as wages begin to rise. This could yield a “Fed surprise,” Xu notes. Other analysts have been closely watching global bond demand closely for signs of a fissure.

The second place potential is for the Trump administration to exit NAFTA or engage in Chinese sanctions, Xu notes.

Such aggressive actions against China could, in turn, cause them to lose appetite for US bonds, is the bear analysis that connects potential dots.

Xu ends her Kurtosis sandwich by looking at geopolitical risks that could result in instability. This includes a confrontation with North Korea and a ratcheting up of the argument over the size and power of one’s nuclear button.

The nuclear button some analysts are more concerned about lies in Iran, a region where long-held religious loyalties and national leadership is being tested. If a proxy war between Iran and Saudi Arabia – played out in Syria and Yemen -- becomes an actual battle between the two regional heavyweights, markets, particularly oil, could see historic volatility. And while geopolitical tensions in the Middle East have yet failed to concern markets, a nuclear confrontation in the Middle East could easily rile stock market volatility, too.

Risk analysis can be depressing, but staring down risk is what volatility management is all about.