ValueWalk
Home Stocks Avoiding Big Mistakes: The day I found out it was all rigged 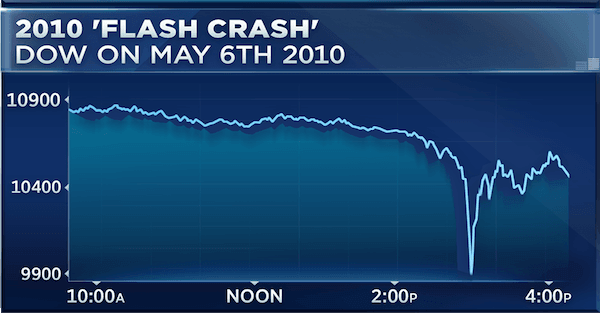 The most exciting stories from the morning’s newspapers were reviews of the upcoming Iron Man 2 film.

But all that changed at around 2:45pm when, without warning, the stock market crashed, and the Dow Jones Industrial Average dropped 1,000 points within minutes.

It was unprecedented… especially because there was absolutely no reason why stocks should have fallen so much.

It’s not like Apple had declared bankruptcy, or the Central Bank had jacked interest rates up to 50%. Up until that point it had been pretty quiet in the markets.

As it turned out, the reason behind the crash was that the investment banks’ fancy trading algorithms had gone completely haywire.

Several of the largest banks had developed autonomous software that was capable of trading billions of dollars without the need for human beings.

And at 2:45PM that day, their software started to fail… inexplicably selling stocks to the point that prices collapsed nearly 10% in minutes.

They called it the Flash Crash, and, even though stocks had largely recovered by the end of the day, the banks lost an enormous amount of money.

Then something interesting happened. Within a few days, the major exchanges announced that they would CANCEL many of the trades that took place during the Flash Crash window.

In other words, they were handing the banks their money back.

I never forgot that moment… because I received an email from my broker informing me of the news.

They were canceling a profitable trade that I had placed during the Flash Crash window, effectively giving it back to the banks.

When the banks’ trading algorithms performed well and they all made money, the profit was theirs to keep.

But when the software failed and the banks lost money from their own mistakes, the exchanges gave them a do-over.

Sadly that episode only begins to scratch the surface of all the ways that the market is rigged against the little guy– high frequency traders, brokerage rehypothecation, manipulation of interest rates, exchange rates, and asset prices, etc.

Owning shares of a successful business that’s run by honest, talented executives can be a fantastic investment.

The key lesson for me, though, was that I should NOT buy unless the odds of success are remarkably in my favor… or as Jim Rogers says, to wait until the money is just lying in the corner, and all I have to do is walk over and pick it up.

Coincidentally we’re having this conversation at a time when stocks (at least in the United States) have hit fresh, record highs.

By themselves these numbers are meaningless, except to suggest that stock prices have never been higher.

The numbers that really matter are the valuations, i.e. how expensive is a company’s share price relative to its earnings, assets, sales, etc.?

To put things in perspective, the average Price/Earnings ratio across the companies in the S&P 500 Index is now 26.36.

If you flip that number around, it means that the current profits of the average company in the S&P 500 are just 3.8% of its share price.

That’s pretty pitiful; it suggests that investors are paying way too much for shares, and receiving far too little profit in return.

And the only other times in history that it’s consistently been this high were just prior to the 2008 crash, the 2000 crash, and the 1929 crash.

The story is the same looking at other indicators.

The Cyclically-Adjusted Price/Earnings Ratio (or CAPE ratio) which adjusts earnings for inflation over a 10-year business cycle, is now 33.27, more than DOUBLE its long-term average.

In fact it’s only ever been higher ONCE in history– during the dot-com bubble in the late 1990s.

The S&P 500’s average ratio of Price to Book Value is 25% higher than its long-term average. And the average Price-to-Sales ratio across the S&P 500 has never been higher… EVER.

Buying stocks at historically risky valuations isn’t the kind of no-brainer edge that I’m looking for.

I’d much rather wait for a major correction, and then gobble up shares of fantastic companies when everyone else is selling.

To be fair, though, this could take a while.

Stock valuations have been anomalously high for the past several years. And they could become even more outrageously overpriced.

But that doesn’t mean you have to sit and do nothing (though sometimes doing nothing IS the right strategy.)

A number of our readers, for example, have invested in short-term secured lending opportunities that can yield up to 13.5%. And there’s so much collateral backing the investment that risk is quite minimal.

Consider that, since the Flash Crash of 2010, the Dow Jones Industrial Average has returned about 12% per year…

So, yes, there are options out there that can generate strong returns while you wait for the right buying opportunity.

All of this goes back to the major theme we started talking about last week: AVOIDING BIG MISTAKES.

Last month, for example, shares of a retail conglomerate Steinhoff International fell more than 60% in a day, and 90% in a week.

Ask yourself how you and your family would be affected if your stock portfolio lost half of its value? And would that impact be worse than missing out on another 20% to 50% increase in stock prices?

It’s a question only you can answer.

But if your instincts are leading you to safety, it might be time to consider taking some money off the table and seeking safer alternatives.

And to continue learning how to safely grow your wealth, I encourage you to download our free Perfect Plan B Guide.