I’m going to show you three graphs that sum up the study discerning political polarization that has been conducted since 1994.

These three charts look at the years 1994, 2004, and 2017. Even as late as 2004, notice the broad crossover between the median Democrat and median Republican. And then notice how wide the divide is today. 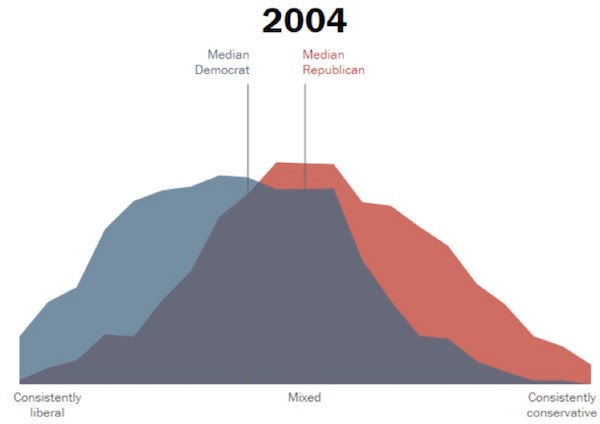 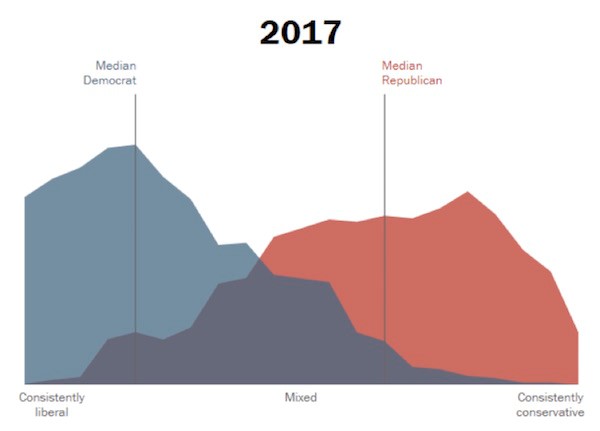 Not only are the median positions of both parties further apart, but both parties have also shifted farther to their respective extremes in the last 13 years. The middle ground is much smaller.

The Fragmentation of Society

The Internet, social media, and the other media we consume have allowed us to live in echo chambers where we are not really hearing much from the other side.

We talk to people who think like we do and who tend to confirm that we are correct in our beliefs. That constant cycle of reinforcement makes our positions even more hardline, to the point where we trivialize or disparage the other side.

It has seemingly become acceptable for an American congressman to say that he doesn’t feel sorry for those killed in the mass Las Vegas shooting because they were likely Trump supporters and against gun control.

And for white hate groups to blatantly and publicly espouse racist positions. Antifa groups can call for the random killing of white people, simply for being white. And fewer than 30% of Millennials think that democracy is clearly the superior form of government.

And that is where we are today.

And so, when people ask what is in my worry closet, it is the fragmentation of society.

Good work and participating in society give us meaning in life. Income just gives us a way to scrape by, but not personal life satisfaction or meaning, which is why we have an epidemic of opioid deaths, suicides, and rising deaths from alcoholism in the United States among white unemployed workers between 45 and 54.

They have lost meaning and hope in their lives.

The calls for a guaranteed basic income (like Mark Zuckerberg’s) are just beginning, but that is going to become a major political theme in our future. Like King Canute, we cannot stop the tides—but perhaps we could get creative and channel that tide.

What do we think of shorter work weeks? Just as Roosevelt put men to work during the Depression, maybe we need to think about finding jobs around our communities that need to be done. Guaranteed basic employment. Mull that over….

Yes, that offends every Hayekian neuron in my brain, but in a world of an unimaginable and unmanageable future, we are going to have start thinking the unthinkable.

Let’s be clear, these problems are not all going to show up next year, and most won’t even start to be understood until the early 2020s. But they're coming and we need to plan for them now, for our country, for our own and our families’ lives, and for our portfolios.

I look forward to being part of your journey and hopefully helping you to plan.