ValueWalk
Home Economics Do Central Banks Cause Or Cure Inflation?

When inflation lags, one of the key tools in the central banks’ arsenal is policy rate manipulation. Reducing rates in a stagnating inflationary environment discourages saving and cash hoarding, and encourages spending, at least in theory. We expect to see increases in both consumer spending and credit, tilting the supply-demand balance in favor of demand and providing much-needed economic inflation. However, despite record low interest rates and extensive central bank asset purchase programs, the traditional inflation measures have not responded as expected. How will the central banks normalize interest rates?

Where is the Inflation?

Negative interest rates first appeared in the eurozone in response to concerns over country debt levels, and in Japan as a reaction to deep-rooted economic issues and demographic trends. Their success, as measured by traditional inflation measures, has been almost zero. Japan has struggled to find any sustained period of growth, while the European Central Bank (ECB) has been desperately fighting deflation. Still, both authorities remain rooted to their dovishness.

ECB President Mario Draghi has previously said, “We aren’t there yet on inflation,” and an ever-strengthening euro (up almost 15% year-to-date) is offering further inflationary resistance. Rate hikes now seem less likely than ever, with money markets pricing in just a 10% probability of a 10 basis point (bp) hike over the next year, down from highs of 90% in July.

However, inflation is very real, although we need to look beyond the traditional CPI/RPI measures to see this. One need look no further than the stock market. Using Warren Buffett’s favorite indicator, the stock market capitalization to GDP ratio, we see the second most highly valued stock market of all time. With Buffett running record cash levels at Berkshire Hathaway, he clearly agrees.

Nevertheless, there is the argument that traditional valuations fall down with zero, indeed negative, interest rates; this certainly merits further discussion. We do know that the stock market has seen one of the longest, and perhaps most concerning, bull markets in living memory, with historically low volatility to boot. 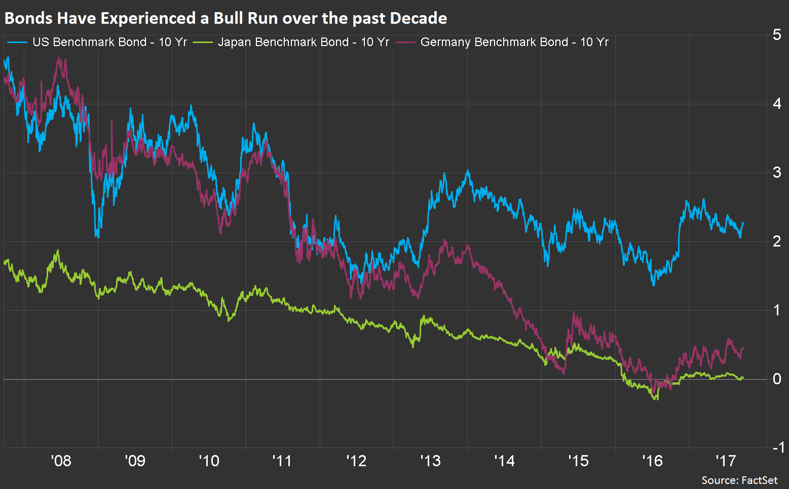 Bonds have also experienced a fantastic bull run, powered by (obviously bond-friendly) negative interest rates, but also by the central banks’ recent weapon of choice, the money press. Whether referred to as quantitative easing, an asset purchase program, or whatever other fashionable moniker the banks can offer, these programs still amount effectively to printing money. Ultimately, the concept started out simply enough: central banks buy vast quantities of their government’s debt, thus keeping markets afloat, flooding them with an abundant supply of money, and allowing the government consistent access to cheap funding of their deficits.

These measures proved incredibly popular. So popular in fact that they were extended, broadened, and extended again. Eventually the ECB began to run out of bonds to buy, while the Swiss National Bank (SNB) now appears to be one of the largest holders of Apple stock. Yes, the purchase programs even found their way to the stock market.

The Swiss yield curve is now negative out beyond the 10-year point. Not only do you have to pay for the privilege of lending money to your government, but to corporations, as well; currently, over $1.6 trillion of corporate debt is now negative yielding.

Just four central banks now hold a collective $11.23 trillion of exposure to the fixed income markets, and central bank policy seems to be the number one driver of markets today. The days of laissez-faire central banking are over, and the Bank of Japan (BoJ) has even overtly vowed to keep the 10-year yield at zero. Volatility seems to be hitting record lows week by week, and with it comes waves of hedge fund closures and experts declaring the markets broken, and wrong.

There is no question that markets have not been functioning as before, but it remains to be seen whether this time it will be different. U.S. Federal Reserve chair Janet Yellen recently stated that “Another crisis is not likely in our time,” which in itself seems very unlikely. But with central banks ready to do whatever it takes, where do we go from here?

Central Banks Have a Few Options, None of Them Perfect

There seem to be three obvious ways out of this situation: inflation, simply printing our way out of debt; growth, achieved by slowly tapering the stimulus programs, reducing the balance sheet, normalizing interest rates, and applying a healthy surplus to the debt burden; and finally, a complete economic reset, à la Iceland in 2008, 1931, etc.

Memories of 2008 still seem too fresh for leaders to allow an economic reset and the downturn of the business cycle. That leaves us with two options: inflation, or tapering and normalization. We just need to look to the U.S. taper tantrum of 2013 to realize the precipice upon which the current markets are built. Any removal of stimulus could prove to be fatal to a fragile economy; therefore, caution is crucial.

Normalization of interest rates has been a goal of central banks, ideally as a response to hitting inflation targets and slowly bringing rates up to their historical levels to reel in a booming economy. In doing so, a surplus could be run, debt paid down, and a restoration of the norm would follow.

When something sounds too good to be true, it usually is, and this is no exception. The very same central banks in charge of raising rates have spent the last few years loading their balance sheets full of anything they can get their hands on. While this has been very effective on the money supply side of things, when it comes to raising rates, we have a catch-22. Leaving rates as they are risks runaway inflation when the economy finally picks up, but raising rates will cripple the balance sheets of the very banks doing so.

We just need to look at the effect of a mere 100 bp rise in rates, let alone 200, 300, to see the effect this would have on the $11.23 trillion worth of bonds sitting on the balance sheets of the BoJ, SNB, ECB and Fed. Just a simple return to historical averages would wipe over $2 trillion from the sheets of the banks over a 12-month period. That’s just the bond piece, never mind the equities. The inevitable stock market correction, and spike in financing costs, could be fatal to any economy.

That leaves us one option: inflation. The banks can keep printing and printing, and buying and buying, until the bond markets take away the keys. Faced with a colossal level of debt, the banks would have their hands tied. Any economic growth would be impossible to rein in, and inflation would be rampant. Interest rates would be utterly un-raisable, and an inevitable inflationary reset would follow.

Would this be the purge needed? Debt burdens would be assuaged (at the expense of the holders), markets would inflate and normalize, and inflation-protected assets would prevail. All things considered, it certainly seems the least damaging, and, consequently, the most attractive, option.

Regardless, the cost has to be borne somewhere, and the brunt would fall at the doorstep of financial institutions, fixed income funds, and savers, which may just be too damaging to bear. Pension funds, who are already fighting chronic underfunding, would come out in particularly bad shape. All told, we have a classic case of damned if you do, damned if you don’t. The central banks appear caught in their own catch-22, whereby they would be mad to push for normalization, and mad not to.