ValueWalk
Home Info-Graphs How can a small fry compete in the oil market with the...

Back at the end of 2016, many were calling for a continued rise in commodity prices, being driven by a continued bounce higher in Crude Oil prices, which had risen from the low $40s to mid $50s.  There was a small rally in there somewhere, but here we are half way through the year and energy markets are down 10-12% and back to their previous levels. {Disclaimer: Past performance is not necessarily indicative of future results}. What can we say, the markets enjoy proving people wrong.

But that begs the question… who wasn’t going all in on a rebound in energy prices?  Who had their doubts about this continued rebound? Well, those well versed in the fundamentals of the energy markets surely had their doubts knowing what was going on with the supply side of the equation. Just what kind of people are they and what kind of factors do they consider when analyzing the energy markets? We sat down (digitally) to dig into just that, hosting CME Senior Economist Erik Norland and three Managed Futures / Global Macro managers laser focused on the energy markets in our recent webinar.

The Most Worrisome Trend In Investing: Confusion

Here are some of the highlights.

The Crude Curve is FLAT

Erik Norland kicked things off with an overview of the fundamentals of the crude markets and included the below chart showing just how flat the Crude Futures curve is, meaning traders don’t expect prices 24 months from now, to be all that different than prices right now or anywhere in between. See for yourself: 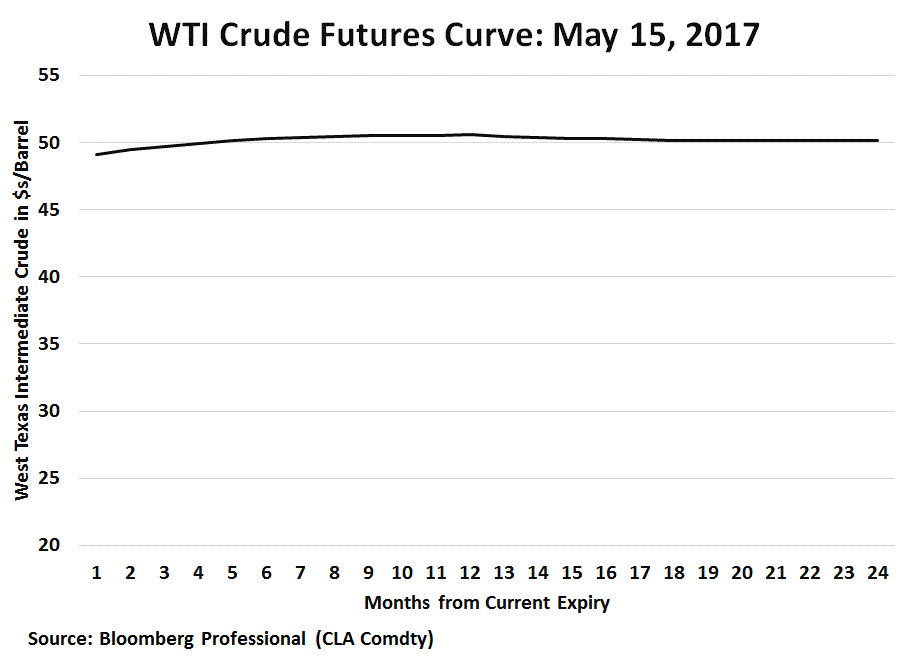 If you’re trying to make sense of this chart, each one of the numbers on the y-axis represents a different futures contract on WIT Crude Oil. Here’s Erik:

“Erik: What the market is saying is that price will remain between 45-50 dollars for at least the next 24 contract months which takes us through the middle of 2019. You have this extraordinary flatness. The center of a probability distribution of the way people view the potential outcome of the market price in the future.”

So where does one look to figure out why the curve is so flat? What causes the price curve to fluctuate? Erik outlines three specific factors:

If you’ve been paying attention to the energy markets over the past couple of months – you’ll know that the rules of the crude oil market have changed. One of the things that haven’t changed is storage and inventory. You’ll always need somewhere to store energies, and as of late there’s not much room left. Here’s Erik:

Erik: Inventories are near record highs, and inventories have a strong seasonality. They build up in the winter months and drawdown in late spring and early summer. A helpful way to look at inventories is looking at a year on year change. In spite of increasing over the past couple of years, the year over year continues to increase today. There’s not much storage capacity left – people are being forced to sell. It’s on factor that’s causing oil factors to sink. 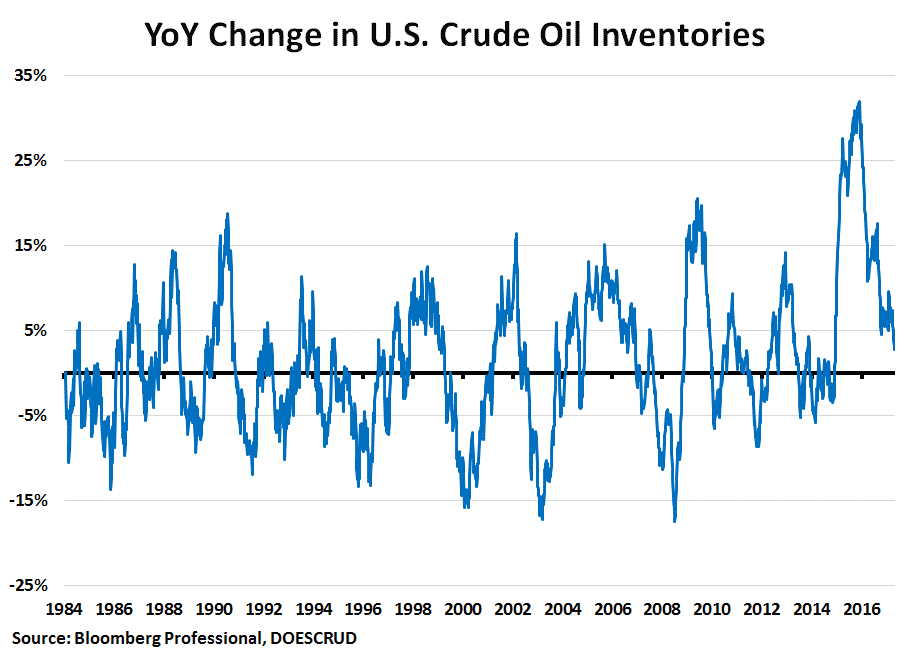 As you can see that even after the seasonal fall off, it’s still well above the normal low points of the seasonal cycle. This is especially an issue because production is bumping.

This is where things can get a little tricky. Most people will look at active rig counts to get an understanding of where supply numbers will be, but as Erik points out, it’s not about the number of active rigs, it’s about how much those rigs are producing. 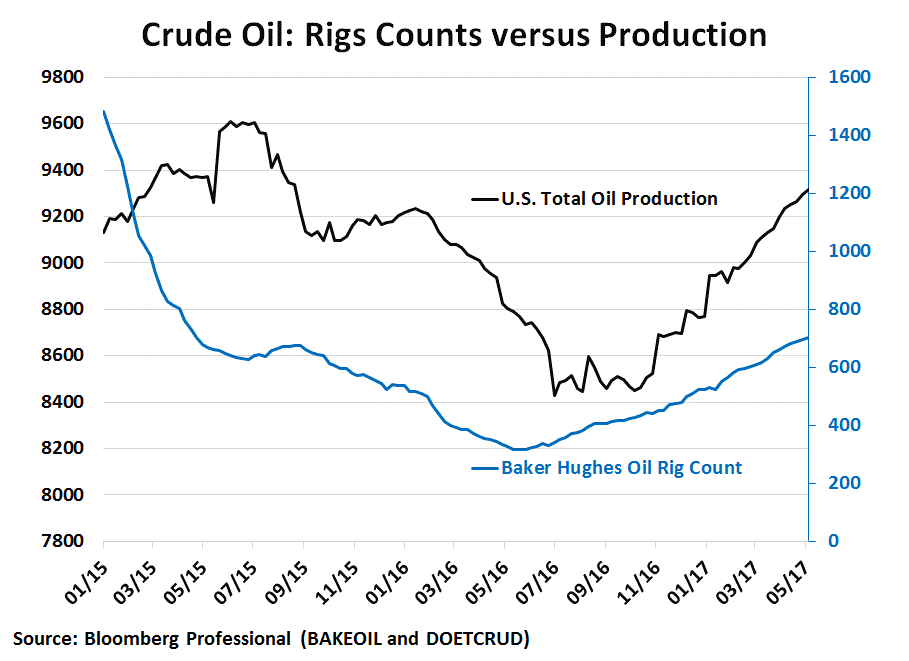 Finally, there’s no denying that with the rise of electric cars and the boom in solar energy, there’s a conscience effort to cut oil demand on behalf of consumers. Erik explains how energy efficient cars are changing the demand side of the market:

Erik: On the Demand side, we have this phenomenon of vehicles becoming more and more efficient. The average car produced in the year 2017 will consume 15-20% less gas per mile/kilometer than produced 10 years ago. Those gains in efficiency is putting a lot of downward pressure on automotive demand. Essentially the automotive fleet turns over about every 7 years. If you divide 15% efficiency gain over the last 7 years by 7, that implies a 2% efficiency gain for the aggregate automotive fleet in the United States per year.  In order to keep demand stable, we would need to see miles driven increase by 2% per year.

Of course, this is just the tip of the iceberg what it comes to understanding the crude market. There’s also an inherent relationship crude oil plays with soybean oil, as well as China’s role in shaping the futures crude oil curve. To learn more from Erik’s fundamentals to the markets, you can access the recording of the webinar, by downloading it here.

But how do energy market practitioners – those managing millions of dollars through their hedge fund strategies –  view this flat curve and the supply and demand fundamentals?  Here are our highlights from the managers:

Why does Crude have a flat Curve?

Emil Van Essen, who is a relative value trader in the energy markets, says it has a lot to do with technological advancements on the supply side.

Emil: We’re are a point where we see these massive technology gains in drilling – especially in shale but also offshore. The cost of production has almost gone in half. As a result, you’re seeing a mean cost of production in the 30 and 40 dollar a barrel. I don’t see anything above 65 dollar for a long long time. There’s too much drilling capacity all over the world and the shale region.

Todd Garner of 20/20 Energy Advisors says – this flat curve has a lot to do with this new ability for shale oil companies to turn on and off rigs quickly depending on price:

With Emil adding the following on how they view, and trade, the curve:

Emil: The front of the curve is indicated by storage levels – high demand. The back of the curve is driven by hedgers. We might go out 18 months in our spreads. A lot of our trades are roll trades. Is there an over under supply? Is there underlying investor demand? From our perspective, we’re looking at what our models are saying over the next 30-60 days.

Todd Esse of Sourthport Energy primarily trades in the natural gas market, and says the range in that market is much much wider than crude and that it seems to be more volatile.

Esse: We’re in a 1.50-4.50 range. That’s a pretty wide range. Last year, it doubled in a period of months. Natural Gas has a bright future. We expect demand to increase 15-20% over the next 5 years with the Mexican imports and LNG exports. When that extra slack gets soaked up – we see lots of volatility around the curve.

It’s very easy for our brains to lump together all the energies but as Esse explains, there are many other factors at play when it comes to natural gas as to crude oil.

Esse: I think a lot of the market gets caught up in the what if’s and therefor – winter months – el nino – LNG expansion. People fill up too much risk on their book based upon their beliefs of what’s going to happen.

Over the past 18-24 months – gas supply hasn’t grown at all. I believe with today’s gas drilling we are just maintaining a balance. We’re not producing enough to meet that LNG expansion. I don’t think we’re seeing a price response with the supply we need.

How can a small sub-managers compete in the oil market with the big physical players?

The big question we had for each of the managers was – how do smaller and mid-sized managers look to find alpha when they’re competing against the big physical traders in the same market? Esse and Garner say it’s a simple as having different outlooks on the market.

Todd Esse: They have a different focus than I do. They are running a physical desk and I’m not. They’re business is focused around speculating and trading the whole curve and may have customer flows. The problem in the natural gas space, the history is littered with failed trading. The large companies lose money just as much at the small mangers. The data that we use is the same data that they use.  I apply it differently than the big shots do. We handle risk differently, because we focus on the most liquid part of the market.

Garner: Each of the different big dogs has different perspectives, different goals, and different styles. They all provide liquidity which is good for the market. But what separates us is being smaller and more focused – we are all nimble. We are focused on a certain set of data. That allows for much better returns.

These are just some of the many topics we covered in this energy and oil webinar, so go check it out for yourself… if for nothing else than to hear some of the smartest in the biz riff on all things energy market-related. You can download a recording at any time here.