We highlighted AQR’s rapid ascension into the big boy ranks of the managed futures space in our recent look at assets under management, showing they’re among the largest managed futures managers, now at about $16 Billion Assets as of the end of 2016.  But how is that $16 Billion worth of assets feeling about their investment thus far?

We hadn’t dug into AQR’s numbers since this 2014 post, and from the calls we’re fielding, investors aren’t feeling overly great about things. Unfortunately, all that new money flooding into their main fund (AQMIX) over the past few years is looking at having lost around -8% in 2016 and down nearly -12% over the past 12 months. Here’s the unhappy chart and stats on Morningstar, leading investors not all that familiar with alternative investments – much less the managed futures variety – asking “what’s going on?” 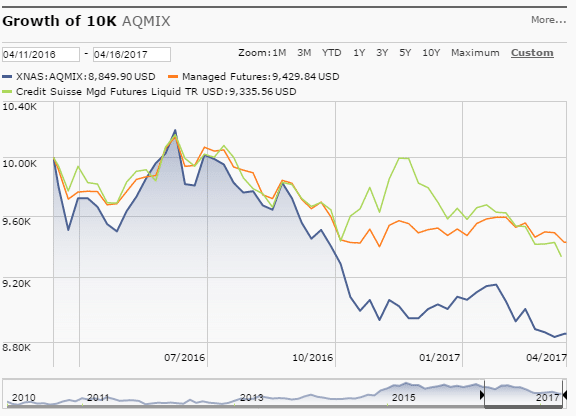 This past year’s chart sloping from the top left to the bottom right seems to be the mirror image of the total assets in the fund (per Brightscope), which looks like the hill you have to climb virtually on the stairmaster. It seems they’re getting their money’s worth for canvassing the country with wholesalers pitching famous quant Cliff Asness’ products. It doesn’t hurt, either, that Cliff is everywhere…  Connie Mack interviews, Investment News conferences, CNBC appearances, etc.)  Speaking of his star power – one investment advisor we talked to invested in $AQMIX said he invested because he liked the story about Cliff Asness in “The Quants” punching his computer. That’s one way to pick investments… just don’t tell your clients.

So, what’s going on?  We’ll be the first to tell you it’s been one tough environment for systematic programs which rely on market momentum and volatility breakouts. It’s been well documented that we are in a historically low volatility regime (see Barron’s calling it the least volatile quarter on record since the 1960s or our 2017 outlook here for more on that).  For a systematic trend following type program like AQR, that causes problems, because the program is forced to buy (and sell) into every false breakout to insure it grabs the “next real breakout.” But, if each breakout fails to extend into a new trend due to the low volatility and the growing ‘Buy the Dip’ mentality, it creates multiple sharp V-shaped reversals. It’s the death of a thousand cuts scenario, with the computer models designed to typically look for every possible opportunity more so than they’re designed to avoid a lack of opportunity. Stitch it altogether and you get a lot of “strikeouts” and not a lot of hits, causing consistent losses.

Consistent losses? Who wants that? Well, anyone who is investing in systematic programs for their crisis period performance and ability to catch trends, should. You see, systematic models like AQR are doing what they’re supposed to be doing – taking “small” losses as they stay in the game. They’re designed to swing at almost every pitch, and lose much less when they lose than win. Think of it like a baseball hitter getting 30 strikes instead of 3. The hits and home runs and count the same, but the strikes are only a tenth of what they usually are. Thing is, you still have to get a good pitch to hit every now and then. And systematic programs like AQR just aren’t getting the pitches.

So, the first answer as to what’s going on is that it’s par for the course for this type of alternative investment strategy, with the SocGen managed futures index is down -6.20% over the last 12 months, and Morningstar Category average down -4.49% over the same time period {Disclaimer: Past performance is not necessarily indicative of future results}.  And that answer is going to be enough for the grand majority of investors – who can fall back on – “we’re down, but so is everybody else” type logic. More sophisticated investors will take care to notice that AQR isn’t just down, but actually down more than its peers, on average.  You can see on the Morningstar sheet that it trails the category average by a whopping 6% so far this year, putting it in the 88th percentile, or roughly the 116th best out of 132 funds in the category.

Expanding that view, we rank the program against not just other mutual funds, but private funds as well in our new database– and assign AQR’s Managed Futures mutual fund a ranking of just 2 stars, out of 5, finding it in the 4th quintile of our rankings which consider risk adjust returns and time weighted statistics.

So, the more advanced question is: What’s wrong with AQR in relation to its peers?  The obvious question there is: “Is it too big?”  At roughly $16 Billion in the strategy from what we can tell (the numbers are all over the board depending on the source, but that’s likely good within a few billion), that’s more than a fair question.  They are the 800 pound gorilla in the space, and their under-performance of the category is a more recent trend, since rocketing past $5B, $8B, 10B, and onwards. So is it that gargantuan size which is causing it to lose more than its peers?

A Larger size can cause many issues, one of which is it restricts programs from getting meaningful exposure in markets with position limits like grains and softs. Cocoa, for example, had one of 2016’s best trends, dropping about -30%, but it also has a position limit of just 6,000 contracts. So, even if AQR got the trade completely right, it could only make 6,000 contracts X 1,000 points times $10 per point, or $60 Million.  That’s a gain of just 38 basis points (0.38%) on the $16 Billion, which you can tell is not quite enough to move the needle.

Larger sized funds can also make market impact an issue, causing what we call “slippage” in the business, where your trade entries and exits are different than what the computer models say they should be, because of the size of your orders pushing the market one way or the other as you attempt to get in or out. We’ll take a guess that this isn’t a major problem for AQR, assuming they’ve spent the time and resources figuring out execution algorithms to dampen the market impact their orders have.

Along those lines, larger sized funds can also make you the target. It’s a zero sum game in futures, which often means people come after the largest “stack” at the table, creating a sub culture of prop shops and traders who attempt to reverse engineer the large fund’s models to make educated guesses as to when and where billions of dollars will be coming into this market and that. If you have to not only beat the market, but also the other players at the table, it sure pays to know what the largest of those players are doing.

Finally, large sized funds concentrates the portfolio into financial markets, making it reliant on trends in currencies, bonds, and stock indices to turn a profit. And it’s that angle, more than anything else, which is “the problem” in our opinion. So not size, per se, but the portfolio construction decisions made in order to effectively achieve that size.

In the end,  we don’t believe there’s anything wrong with AQR’s managed futures offering. It’s doing what it was designed to do, keeping its powder dry and suffering consistent losses in exchange for future outlier-type gains. It’s about in line with the rest of the space over the past three years, and the past year of underperformance may just be a result of it being a little more volatile than the average fund in the space. So, losing more on the downside, but able to make more on the upside (we’ll have to wait and see if that’s the case).

AQR is basically the managed futures index of today. It’s the investable benchmark. If you’re trying to get the average performance, strap on some AQR. If you want more, at the risk of getting less, you’ll need to look at much smaller managers doing niche strategies in private funds (go here to start browsing private funds), and even some of the smaller managed futures mutual funds. We’ve highlighted one such manager in the past, Catalyst Auctos Multi-Strategy, and here’s their end of March comparison to AQR and other larger Liquid Alt mutual funds.