ValueWalk
Home Politics What’s The Best Advice For Building A Career In Emerging Markets During...

Via Nathaniel Parish Flannery, of Forbes with permission

Donald Trump’s presidency poses a unique set of risks for students and college graduates interested in building careers in emerging markets. His rhetorical attacks on Mexico and China and military actions against Syria and Afghanistan have rattled some investors and introduced a new level of uncertainty into US politics. Small business owners and consumers remain optimistic about the prospects for economic growth during the Donald Trump presidency. But, students and recent graduates who are interested in building careers in emerging markets face new questions about trends in investment, trade, and globalized manufacturing. To get a sense of what college graduates with an interest in emerging markets can expect during the Trump era, I reached out to Robert Abad, a graduate of Columbia’s School of International and Public Affairs (SIPA) who runs EM+BRACE, a boutique emerging markets advisory firm.

Nathaniel Parish Flannery: President Trump has certainly taken a new course in terms of discourse and style of diplomacy. But in real terms how much of an impact is Trump having on the world of emerging market investing?

Robert Abad: Looking at the performance of Emerging Markets or “EM” equity, fixed income and currency markets over the past 12 months, it might be easy to conclude that Trump has hardly made an impact. The truth is: it’s just too early to know what the real impact will be.

First, Trump’s unpredictable and increasingly irrational rhetoric on global affairs has shattered conventional wisdom of present-day international relations and muddied our ability to analyze global risk. It’s engendered doubt about the integrity of diplomatic alliances, the viability of security agreements, and the future role of multilateral arrangements in helping to preserve the world order and its commons. More worrying for EM, it’s cast a pall over the US’ leadership role in championing free trade, market integration and democracy – factors that, in aggregate, have been essential drivers of global progress.

Second, Trump’s inflammatory rants about Mexico and China throughout the US presidential campaign were more than enough to rattle EM sentiment. However, Trump’s recent military incursions in Syria and Afghanistan, and his barbs at North Korea have instilled a creeping sense of fear that, in a moment of self-interest, self-promotion, or self-preservation, he may inadvertently erase a century’s worth of hard-fought global progress or, worse, plunge the US into a costly and protracted global conflict.

Such fears, quite frankly, cannot and should not be taken lightly. The literature on global conflict highlights “fear of loss of prestige” and “political misjudgment” as two principal causes of war. With economic tension and populism at a fever pitch across the world, and the US, Russia and China jostling to secure their spheres of influence, a simple provocation by one party or an ally could set off a chain of unexpected events.

With this in mind, it’s worth asking how global markets, including EM, might fare in a scenario of major global conflict – one that has a debilitating impact on financial markets, supply chains, and immigration – for example, the manner in which the First World War disrupted the first wave of globalization in the modern era. The knee-jerk reaction might be to write-off EM in such a grim scenario. However, the reality is that the emerging world has always played an integral part in reanimating the global economy during and after periods of major disruption, via its core strengths: labor and natural resources. There should be no reason to expect a different EM dynamic going forward.

Parish Flannery: Let’s take it to the regional level. Within Latin America how has the dynamic changed? What countries are currently attracting the most attention from foreign investors?

Abad: With the Middle East and Asia currently representing geopolitical flashpoints for the Trump administration, US foreign policy toward Latin America will likely be non-existent. This has potentially negative implications for the region. For instance, should Venezuela default on its debt obligations this year followed by failed attempts at regime change, the humanitarian crisis in that country could spill over into neighboring countries and further aggravate the refugee crisis in Central America. US indifference or a perceived lack of urgency in the face of such problems will only serve to further galvanize anti-US sentiment and cause US-Latin America relations to deteriorate from an already low base.

From an economic and market perspective, Latin America finally appears to be coming out of recession after weathering a commodity price shock, the fear of aggressive US rate hikes, and a series of self-inflicted wounds. Capital flows to the region remain buoyant and borrowing costs supportive for issuers, which bodes well for investment and external financing needs. In a yield-starved world, these factors make Latin America an attractive investment destination relative to other global markets.

However, the risks for the region remain two-fold: first, fiscal deficits and corporate debt burdens across the region are stubbornly high. These factors act as a drag on growth and cash flow, with US-dollar denominated corporate debt representing a key source of vulnerability for most countries during episodes of dollar strength and commodity price weakness.

Second, growth prospects in Latin America have becoming increasingly hostage to political considerations similar to what we’re observing in the US and select European countries. For instance, Brazil has made great strides in overcoming several years of “Car Wash”-related headlines and a recent presidential impeachment. However, the tentacles of this anti-corruption investigation, which have now extended to other countries in the region, have engulfed Brazil’s entire political spectrum threatening to derail the country’s much needed pension reform which is critical in tackling its massive fiscal deficit.

In the case of Mexico, the recent calm that has settled over US-Mexico relations may prove to be fleeting. Trump’s offensive characterizations about Mexicans and follow-through on deportations sowed the seeds for a more contentious relationship going forward. As we move closer to the 2018 presidential elections in Mexico, noise around NAFTA and any ensuing retaliation could once again depress local financial market sentiment, the peso and the economy.

In surveying the rest of Latin America, only Colombia appears to be on more stable footing. 2016 was a challenging year for the country with government officials battling declining oil prices, exchange rate volatility, and an unraveling of the peace agreement with the FARC. 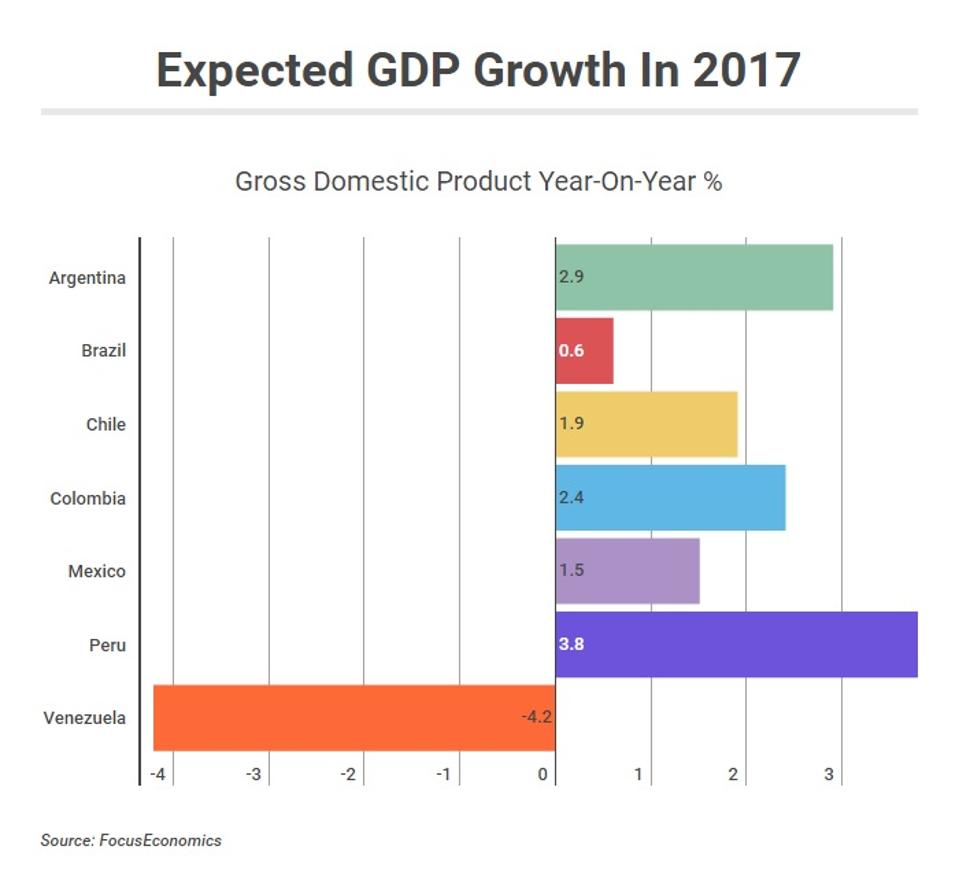 Aside from Venezuela most of Latin America’s major economies are expected to do well in 2017.

Parish Flannery: What advice do you have for the current generation of students who want to build a career in emerging market finance/investing who are going to graduate during the Trump presidency?

Abad: To students or prospective graduates: don’t be disillusioned by what you see around what the world or the bombast coming out of the Trump administration. Study world history – you’ll find plenty of “leaders” with colorful personalities who were finally introduced to reality, and dozens of crises that seemingly had us on the verge of the apocalypse.

If your career aspirations take you to the world of emerging markets, then strive to attain the broadest education possible because having a holistic framework for analyzing news flow and market-moving events under pressure will serve you very well in your career.

Universities and graduate school programs help expand the mind and represent springboards of opportunity, but they can only take you so far. Continuous and voracious reading is essential. This means nourishing your mind by taking in local perspectives, studying maps from around the world and picking up a foreign language with the initial goal of having some conversational fluency. The rest of your learning will come from the people you meet either at work or in your travels, and from the good and bad situations you experience along the way.

Lastly, current events should serve as a reminder of just how fragile the world really is, that we shouldn’t take its continuity for granted, and that we need fresh thinking, activism and passion to solve the world’s most pressing problems. While all of the incessant political debate and posturing in the media can be disturbing and dispiriting at times, remember that politics is just a by-product of democracy.

With all of this in mind, don’t be dissuaded from pursuing a career with an international focus. Embrace the challenge!