So after a long period of basically no volatility, we finally got some – in a hurry.  In case you were out, the S&P 500 (SPX) finally had a down day of more than 1%.  But that’s not the real story.  Look in bankland, where we have been cautious ever since the rip higher on the Trump Trade (lower taxes, higher rates, lower regulations).  The KRX (KBW Regional Bank Index) fell over 5% on Tuesday – yes, the bank index took a dive of 5% in one day.  And it didn’t bounce.  The SPY was up a bit on Wednesday, but marginally, while the dollar continued to weaken versus the Yen and Euro.  The big questions being asked all revolve around whether the dip in the 10-year bond yield to under 2.40% is reflecting a weaker outlook for the Trump Trade, or, if it’s just an unwind of a massive 10-year bond short after the Fed hike last week was perceived as dovish.

All Calvin and Hobbes comics courtesy of Bill Watterson and Go Comics. Buy the books here.

The mini-rally in the 10-year bond could be the proximate cause of the banks selling off, but that is a little too old school – that implies that what is driving these stocks right now is a focus on fundamentals.  But as long-time readers know, fundamentals only matter in the very long term – in the short term, positioning, especially among the CTA/trend following/risk parity crowd, can become very important at inflection points.  These funds all tend to been leaning in the same direction at the same time, in size, and are designed to pull down risk and then flip the other way quickly on a steep decline.  In short, they are the embodiment of feedback loops that drove the big sell off in August 2015 and in early 2016.  But…this time I think we could be in for a bigger shock.  Just because the market didn’t follow through to the downside after Tuesday doesn’t mean we’re done.  Instead, this may be a preview of coming attractions, as the KRX falling 5% in a day is a warning sign, not an all clear sign.  Because these funds can be easily spooked – especially on a hike.

The issue isn’t that there are funds that trend-surf.  The issue is that there are now a lot of them, and there has been a recent push into using these funds to “hedge” risk.  The idea is that any downturn will evolve slowly enough for these funds to sell into it – which has happened in the past.  But that was when the group was a lot smaller.  A recent Financial Times article detailed how pervasive this has become. According to the article, clients of Pension Consulting Alliance (PCA) typically allocate 10-20% of their assets to a “CRO program.” What is a CRO program?  “Crisis Risk Offset.” PCA apparently coined the term.  Now, full disclosure: I know a few people who work at PCA and they are all great folks (and neighbors).  This isn’t about them. It’s about allocating to momentum strategies in a size that may be too big to execute properly.  Portfolio insurance anyone?  If you recall, that didn’t work out well (see October 19th, 1987).  Will that (down over 20% in a single day) happen again?  Unlikely.  But we could easily get a situation where a garden-variety 5% pullback in the SPX quickly morphs into a fast 10-15% decline, as funds de-lever their equity longs or flip short.  See these charts of where we are in terms of equity exposure in various trend-following systems, and the size of these funds today. The problem with everyone leaning in one direction is that they scare easily.  When realized volatility has been near all-time lows, as it has been in recent months, the simpler versions of these strategies view assets as less risky, so they lever them up.  What the models fail to capture is the speed with which volatility can return.  If volatility slowly creeps back up, then the models work fine.  But if it suddenly spikes higher, the models fall apart, other investors quickly de-risk, and everyone is up all night looking for ghosts.  Don’t say you haven’t been warned.

This was one of the weirder weeks I’ve seen in awhile. Various proxies for U.S. interest rates were bouncing around based on each tweet and missive from D.C. about whether or not the new healthcare bill would pass.  When the bill was first pulled on Thursday, U.S. stocks fell, and rate proxies reacted as if all of the Trump agenda was in trouble (Trump policies are viewed as inflationary, so rates move up when he’s doing well and down when he’s not).  Look at the Yen this week – every time the Trump agenda looked vulnerable, it rallied.  And then that relationship quickly fell apart at the end of the day on Friday.  When the healthcare bill got pulled for good Friday, it took about 5 minutes for the narrative to shift from Trump failed to now tax cuts can happen sooner rather than later, and so the Yen fell sharply.  This is the world we live in today – traders are making up new and different reasons to scare themselves daily.  Should we care?  I’d say no, except we’re in unstable times (see the 5% selloff in the KRX on Tuesday for proof), and with lots of money in passive funds, ETFs and trend-following strategies, it won’t take a lot to get the markets heading down fast.

So what will be the catalyst to cause more than a 1% sell-off in the SPX?  While everyone is fixated with the non-bill in D.C., I think they are missing the big risk in the market, which is only getting bigger by the day.  Long-time readers can guess where this is going.  That’s right – China.  While we’ve been distracted in the U.S., China has been raising its equivalent of the Fed Funds rate and trying to stem a credit bubble there from ballooning out of control, while at the same time trying to make sure that if they do succeed in popping the bubble, it deflates slowly.  Good luck with that.  I’m not saying they won’t be able to do it.  I’m just saying that no country has ever pulled it off before.  The borrowing rates for their non-bank financial institutions (NBFIs) are rocketing higher (see the chart below) as they scramble for funds.  Evidently, the popular thing for these NBFIs to do is lend very long-term into risky ventures in order to generate higher yields, but borrow very short-term (under a year) because the funding is cheaper.  If this sounds just like our S&L crisis, version 2.0, you’d be correct.  I would have thought there are some things the Chinese may have wanted to avoid copying from the U.S., but apparently they’ll have to learn that lesson for themselves.

Take a look at the charts below.  You’re actually seeing defaults in China occur, and at an increasing rate (albeit from zero, as extend and pretend is the national motto in China, where everything is always awesome – it is always awesome, right?).  Remember, you’re also seeing short-term repo rates spiking.  A sign of renewed growth and inflation fears?   Ah, no.  It’s a sign of stress in the funding markets and increasing counterparty risks.  Put another way, credit is starting to fray in China right after the biggest increase in debt in the history of the world. 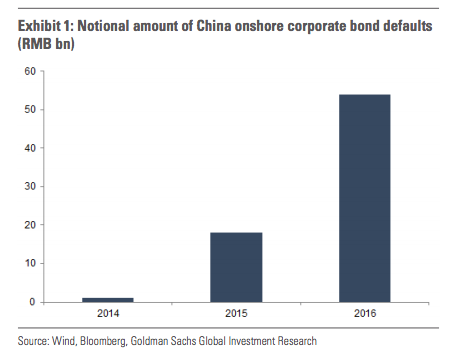 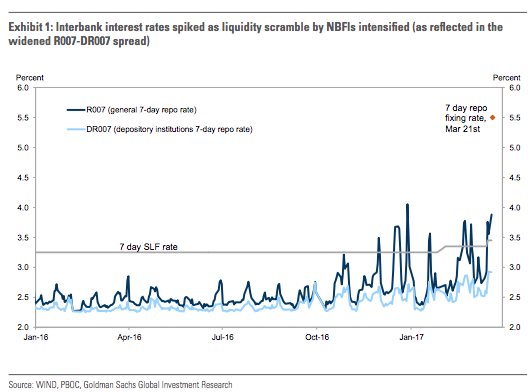 So to recap: the question investors need to ask themselves is what will happen if China’s issues start to manifest themselves in global markets (remember August 2015?  Me too.  We’re all in this together). The combination of large risk-parity funds and CTAs being quite long equities at the exact moment that China’s credit bubble is starting to show signs of stress could end quite badly.  The pension funds that have hired CTAs to sell into the next selloff will exacerbate what would have in the past been a normal correction.  And when retail investors who have been relentlessly told to invest their money in long-only index funds or ETFs wake up to a market that is down 10%, 15%, or 20% fast, are they going to hold on, or even buy more, or are they going to realize that their ship is just a plank, and decide to swim for shore while they can?  If history is a guide, we’re going to see lots of investors making a swim for it.

For a more in depth look at the markets, along with some ideas on how to navigate them, just email me at [email protected] and I will add you to the list for Miller’s Market Matrix.

At the end of our last letter, we wrote, “The market is fully-valued and is priced for Trump to get what he wants.  We’re holding cash in case he, and the market, are disappointed.”  Now we’re also fully hedged and short high yield bonds.  Can markets continue to power higher?  Of course.  But with hedging costs still very low, valuations extremely stretched, credit weakening in China (and in the U.S. in auto loans), at the same time the market structure is particularly fragile, not hedging would be irresponsible.  Do the right thing.  Get some hedges on.

SPY Trading Levels:   Volatility remains low, but is moving higher.  Be careful out there.

Resistance: This little selloff has created some resistance just above the current price, with a lot more at 236 and then 238.