After finishing 2016 up 25 percent, commodities are getting another boost from bullish investors. Investment bank Citigroup forecasts commodity prices will increase this year on strengthening demand in China and mounting inflation inspired by President Donald Trump’s “America First” policies. Commodity assets under management globally stood at $391 billion in January, up 50 percent from the same time the previous year, according to Citigroup.

Meanwhile, hedge fund managers significantly raised their bets that copper and oil prices have much further to climb, Bloomberg reported, with net-long positions in the Comex and Nymex markets surging to all-time highs. 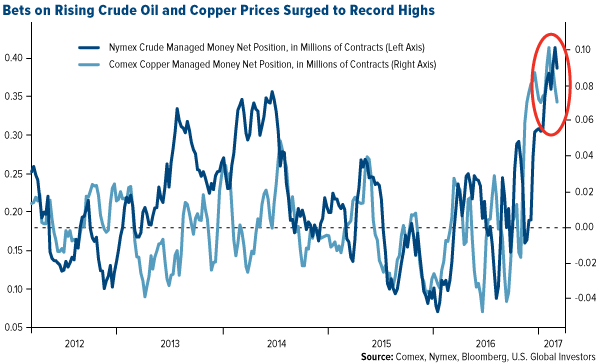 In addition, global manufacturing activity has expanded for the past six straight months, a good sign for commodities demand going forward. As I shared with you earlier in the week, the global purchasing managers’ index (PMI) advanced to a 69-month high of 52.9 in February, with strong showings from the U.S. and eurozone. As for China and the rest of Asia, a recent special report from the Asian Development Bank (ADB) calculates the cost to modernize the region’s infrastructure at between $22.6 trillion and $26 trillion from 2016 to 2030. This comes out to about $1.7 trillion a year in global investment that’s required to maintain Asia’s growth momentum, deliver power and safe drinking water to millions, connect towns and cities, improve sanitation and more. As you can see in the chart below, the bulk of the infrastructure need is in East Asia, which is seeking more than $16 trillion between now and 2030.

Governments have devoted funds to support only some of the projects. Currently, 25 economies in the region are spending a combined $881 billion annually on such projects, leaving a substantial spending gap for global investors to fill. This is an unprecedentedly huge opportunity for commodity and materials investors.

To make investment more attractive, however, regulatory and institutional reforms will need to be made in the region.

China, for instance, announced plans to curb aluminum, steel and coal production in an effort to combat air pollution. According to the Financial Times, as many as 30 northern Chinese cities are expected to cut aluminum capacity by more than 30 percent, a move that’s seen as very favorable to the rally that’s already helped the base metal gain over 11 percent so far in 2017. In the past five trading days, shares in leading aluminum producer Alcoa have surged on the news, jumping as much as 9.8 percent on March 1 alone. Since the November election, in fact, the company has gained more than 44 percent on optimism over President Trump’s pledge to spend $1 trillion on U.S. infrastructure.

One trillion dollars sounds like a lot, but it falls remarkably short of the $3.9 trillion the U.S. needs by 2025 to rebuild its own aging infrastructure. That’s the estimate of the American Society of Civil Engineers (ASCE), which gave the nation’s overall infrastructure a D+ in 2013, with “poor” scores given to levees, roads, inland waterways, drinking water and more.

One of the most urgent areas for investment is the nation’s crumbling dams. According to energy news outlet E&E, about 70 percent of America’s 90,000 dams will be at least 50 years old by 2025, putting them near the end of their engineering lifespans. An estimated 15,500 American dams are now considered “high hazard,” meaning their failure could cause fatalities. The cost of repairing and upgrading these structures is estimated to be around $54 billion.

According to E&E, 80 dams failed in South Carolina in the past two years alone, causing millions of dollars’ worth of property damage.  And just last month in a high-profile case, more than 188,000 Californians had to be evacuated to avoid the collapse of the Oroville Dam, the nation’s tallest dam.

Like the ADB’s Asian infrastructure estimate, this has massive market potential. More than 80 percent of U.S. infrastructure, from schools to streets to sanitation, is in either private or municipal ownership. This means commodity and municipal bond investors will need to pick up where federal dollars leave off.

The J.P. Morgan Global Purchasing Manager’s Index is an indicator of the economic health of the global manufacturing sector. The PMI index is based on five major indicators: new orders, inventory levels, production, supplier deliveries and the employment environment.

Holdings may change daily. Holdings are reported as of the most recent quarter-end. None of the securities mentioned in the article were held by any accounts managed by U.S. Global Investors as of 12/31/2016.