ValueWalk
Home Economics Risk on Risk off ?……..I think risk off

It’s an unusual backdrop where “Risk On” powers equities markets melt-up, while safe haven assets trade as if “Risk Off” is lurking right around the corner. Ten-year Treasury yields declined 10 bps this week (to 2.31%) to the lowest level since November 29th. UK yields sank 14 bps (to 1.08%) to lows since October. Gold added $22 this week to $1,257, trading to the high since the US election. German bund yields declined a notable 12 bps this week to 0.18%, the low since December 29th. Even more intriguing, German two-year sovereign yields sank 14 bps this week to a record low negative 0.96%.

1.Last week US treasury secretary pushed the deadline for tax reforms to august and there is no sight of promised infrastructure spending .Equity markets had build hopes around it

2. Trump reflation was further fuelled by massive credit expansion till january by china which lead to huge rally in commodities. chart below shows that chinese M1 is collapsing which is warning signal for commodities 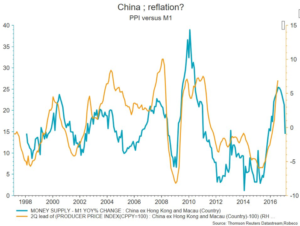 on top of that Jeff currie wrote this to his clients 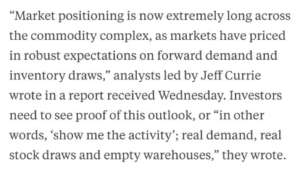 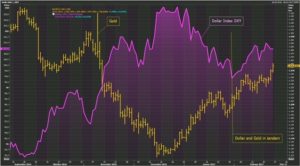 and this was as per marketwatch on 24th feb

So Trump has not offered new spending plans which led to scramble in equities, chinese M1 is collapsing which is a warning to commodities rally , treasury yields are falling and the curve is flattening inspite of record short positions, both gold and Dollar rallying at same point of time, very rare…..Hmmm somewhere smart guys are bailing out of this reflation trade.

So what looks good if this reflation trade is close to unwinding?