In the current political climate herds are running every which way.  There is the anti-Trump herd, the pro-Trump herd, the liberal herd, the conservative herd, the CNBC herd, the mainstream financial services industry herd, the Armstrong herd, the gold bug herd… and there are all those ideologies in play.  But robotic thinking, unless it is in service to profitable trades like this one on an excellent company providing automation (ref. recent Fanuc NFTRH+ highlight), does not pay (disclaimer: I’ve sold and taken the profit).

So stop right there!  These are the financial markets, and if you have not checked your deepest held beliefs, your virtue, your bigotry and in general, your bias at the door you are going to lose.

There is a plan in play, which NFTRH has been tracking for many months, since we abandoned the bearish topping patterns (that weren’t) in US markets during the depths of the Brexit hysteria and the subsequent sentiment thrust, which undid the market’s bearish technical status.  The plan has been ‘SPX bullish’ based on the bullish moving average (up) signal on this weekly chart from the better part of a year ago…

…with a target of 2410 based on the pattern measurement of this weekly chart, which includes the targets for SPX’s fellows, NDX and Dow. 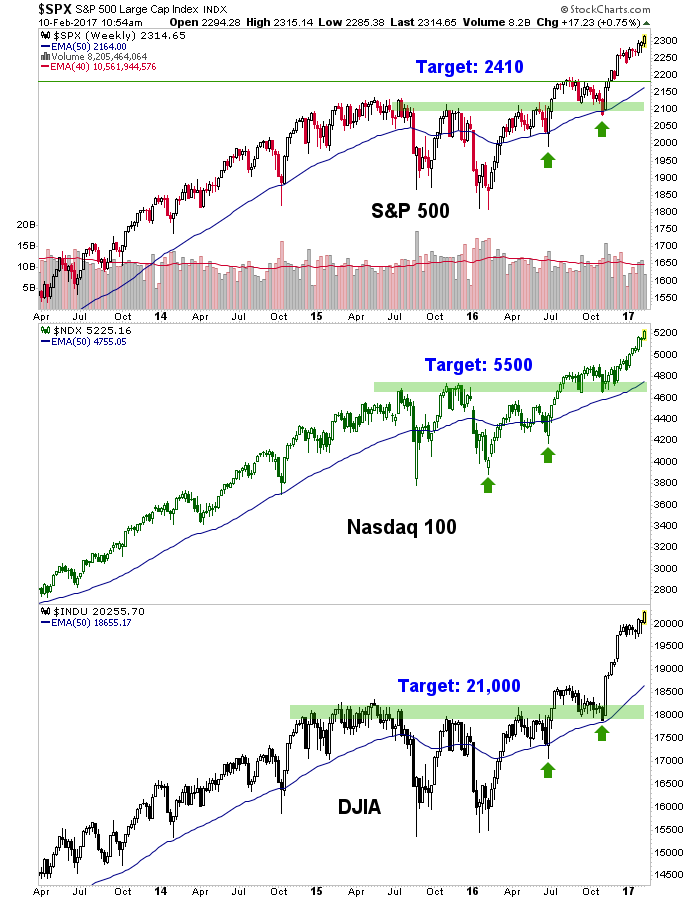 So flipping it around, people who see the Trump administration as a green light to prosperity and continued asset price appreciation are making a very big assumption and I for one am making plans to take the other side of that trade, and their dogma.  But then, I got long in the depths of Brexit and have stayed long to this day.  But what I want to know is, what are the people who puked Brexit and puked the US election thinking now?  I think they are thinking ‘bullish’; very bullish.  From Sentimentrader…

Of course the targets of 2410, 5500 and 21,000 are just simple measurements.  Our current ‘by March/April’ topping time frame is just an estimate based on many different indicators synthesizing in the brain of one market watcher.  Nothing is fool proof, but it is advisable to have plans and it is advisable to have an open enough mind to be able to revise your plans.

If you are clouded by dogma you may not see through your own bias in order to make proper decisions as new information comes in.  Since the election alone we have had the Trump Trade (i.e. buy Materials, buy Financials, sell Gold, sell Treasury bonds and sell Healthcare).

Yet the cut and dried ‘Trump Trade’ does not exist anymore.  It is splintering because as we’ve shown again and again by way of example, there are different areas within Healthcare alone that should benefit in the current environment and others that may not.  Now, we have gold stocks rallying and Materials consolidating, Treasuries bouncing and yet Financials still firm.  Another Trump Trade, the Small Caps are flagging in their leadership.

While the counter-cyclical Gold stock sector has broken out of a downtrend channel in ratio to the S&P 500.  This folks, is a negative divergence to the market and a positive one to the gold sector’s forward prospects.

There are about a million more technical, sentiment and economic indicators I could pull out to hit you over the head with the case to be on alert for changes.  But that is why NFTRH reports average over 40 pages a week; we cover them all and relevant markets and trading opportunities to boot.  2017 is a year that investors will need to discriminate, first and foremost against their own internal bias and secondarily against a market that is grinding out discrete directions week by week.  The ‘just buy SPY and live happily ever after’ market ended with the topping pattern (that wasn’t), Brexit and the US election in 2016.

Subscribe to NFTRH Premium for your 30-45 page weekly report, interim updates and NFTRH+ chart and trade ideas or the free eLetter for an introduction to our work. Or simply keep up to date with plenty of public content at NFTRH.com and Biiwii.com. Also, you can follow via Twitter @BiiwiiNFTRH, StockTwits or RSS.