If you do not understand what is written about in this blog, then you may remain clueless about the coming events of the next dozen years; it all revolves around The Fourth Turning.  The Wall Street Journal said of the book, The Fourth Turning:  “One of the best efforts to give us an integrated vision of where we are going.”

President Donald Trump and (his primary strategist) Steve Bannon are integral to this story, perhaps somehow destined to be in their current positions of power… at least they believe this to be true.  Half of the people in the United States hate everything about the election of Donald Trump and half of the people love everything about it.  As a nation we are divided 50/50 and very few people walk the middle line between the two.

I want to begin by re-stating that I am not taking a political position on the recent U.S. election.  I’m one of those dreaded moderates and therefore willing to take a hard look at the viewpoints of all political parties or candidates.  Taking the middle road certainly eliminates a lot of fear and handwringing.  So, despite me sounding like a Democrat, one of my favorite Presidents was Republican George H. W. Bush (Bush-41) and this is because he was a moderate (and he didn’t attempt to destroy the environment).

Below is a snippet taken from the February 26, 2017 Wall Street Journal on “economic confidence.”  The euphoric Republican win in late 2016, with the economy near its peak high, is the total mirror image of late 2008 when the Democrats took office as the financial crisis was at its peak of turmoil:

I need to start this blog by saying that some recent events have me a bit concerned, such as President Trump’s February 7th 3:00 AM call to his (then) National Security Advisor, Mike Flynn, as to whether or not it is a strong Dollar or a weak Dollar that is good for the U.S. economy.  I was also concerned when I recently heard Trump say that Gross Domestic Product (GDP) was “below zero-percent” (which is literally impossible… it’s like saying that you got on the scale and that you weigh less than zero pounds) and again two weeks ago when he said that the un-employment rate is “currently at 42%” (>2x worse than the Great Depression).  It wasn’t too long ago that Trump seriously suggested that the U.S. could borrow lots of money from foreigners and then default on its debt, keeping the cash and then declaring a national bankruptcy.  And on the evening of February 22nd, he suggested that he really didn’t have tax or healthcare plans at all and would just leave it up to the Republican Congress to send him something to sign.

And then there is this:  A snippet taken from an article headline on Yahoo Finance on February 21, 2017.  Following President Bill Clinton’s earlier example, President Donald Trump plans to change the way that growth in the economy is calculated in order to make the U.S. economy look rosier during his term: 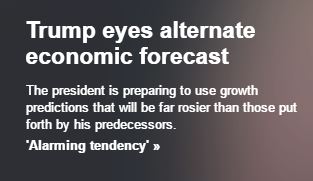 We seem to have entered a brave new world where literally anything that is repeated often enough becomes truth, regardless of its merits.  And a celebrity (or leader) is anyone that has been viewed repeatedly on our little screens and they are worshipped at a level never before seen.  They become our “friends” and we love them and want to be a part of their gang… and “when you’re a celebrity, they will let you do anything, you can grab…”  and they could even “go out and shoot someone and not lose any voters.”  I was not surprised to see Kid Rock recently announce that he will be running for the Michigan Senate seat in 2018… he’s certainly qualified.

?  With all that is now happening at hyper-speed, we must remember that, when viewing over a longer term, stocks represent partial ownership in corporations and their price moves on fundamentals & corporate earnings and not on politics or news or beliefs or emotions or fear or even Tweets or war.  Stocks have been recently moving up because of improved fundamentals and earnings.  Period.  Even when President Kennedy was assasinated, and I can tell you that this was terrible, the stock market went higher and higher because of strong fundamentals and strong earnings.  ?

The Fourth Turning is the attempt by two scholars, William Strauss and Neil Howe, to put a timeframe on cyclical world events, a sort of Generational Theory.  It stems from their observation that history tends to repeat (because humans never learn) and then using pattern recognition to organize these repeating historical events.  The theory is that world events constantly revolve around 80 year cycles (roughly the 80 year length of a typical human life) that can be broken into the 4 different 20 year periods (the 20 year length of time that it takes for a new generation to arrive on the scene) and then the 80 year cycle starts over again, as always.  The length of the cycles actually vary, but are generally close to 80 and 20 years and they fit the pattern fairly well.  The 20 year periods can be either mild or extreme, based on how we act and react.  Wars are sprinkled throughout the four periods (since humans naturally form into tribes that are war prone against “other” tribes) but wars are more likely during the CRISIS period.

The four 20 year long periods are: 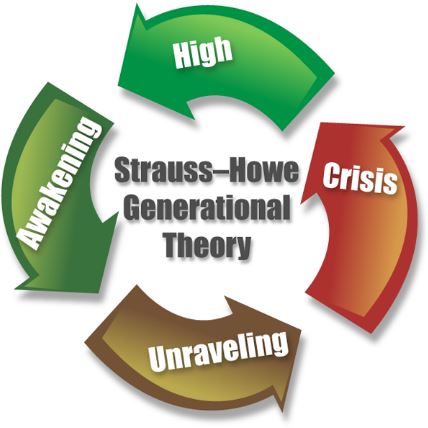 It isn’t just Steve Bannon that believes this theory.  In the late 1990s, Democrat Vice-President Al Gore bought and sent a copy of the book, The Fourth Turning, to each member of the U.S. Congress.  The problem with Steve Bannon is that he seems to believe that he (Bannon) has the divine mission of driving us into a World War III CRISIS by breaking down political and economic alliances and by confronting the perceived enemy (Islam) head on and then bringing us back into a new HIGH period, rebuilding America into a new ‘Greatest Generation’ crafted out of the group effort of the current youth of America.  After all, Bannon is a self-pronounced Nationalist (which is why so many Neo-Nazis are attracted to him).  In a mid-2016 Vanity Fair article, Steve Bannon actually stated that Donald Trump was:  “a blunt instrument for us and I don’t even know whether he really gets it or not.”   Strauss and Howe themselves were looking for a “Gray Warrior Leader” and I wonder if Bannon, who is now the only Presidential-advisor in U.S. history to ever be placed on the all important National Security Council, somehow believes that he might be this catalyst of change since he is apparently already determining policy and strongly influencing Executive Orders.

Steve Bannon’s agenda seems to have five central themes and I’ll leave it up to the reader to determine the value of each point.  I don’t believe that I am wrong about any of this because it is based on his writings.

Reuters headline on February 27, 2017, Donald Trump announced his budget priorities, centered around the military and borders and sending more troops to the Middle East:

Steve Bannon from a TV screenshot of his recent interview with The Hollywood Reporter:

?  Steve Bannon in a recent Daily Beast interview:  “I’m a Leninist.  Lenin wanted to destroy the state, and that’s my goal too.  I want to bring everything crashing down and destroy all of today’s establishment.”  ?

So, this is what I’m saying:  President Trump & Steve Bannon are apparently basing their political actions on the teaching that they read in a book.  What are some of the 1998 CRISIS prophesies (about today) that the Trump & Bannon duo might feel is their destiny to fulfill?  (Making them self-fulfilling prophesies that then become true!!!)

These are the major predicted events that I gathered together from reading the book and I didn’t leave any out just because they did not fit; how many items below (again, from 1998) are already being fulfilled within the first two months of 2017?

We need to remember that our investment portfolios are separate from our opinions and emotions.  The stock market does not take anything personally and it does not react to the same things that humans react to, or in the same way.  We have to be able to find OPPORTUNITY in CRISIS.  We also have to remember that, if the theory is correct, then a great new HIGH period will be built out of the resulting ashes of the CRISIS period.

Okay, time out for some needed humor: 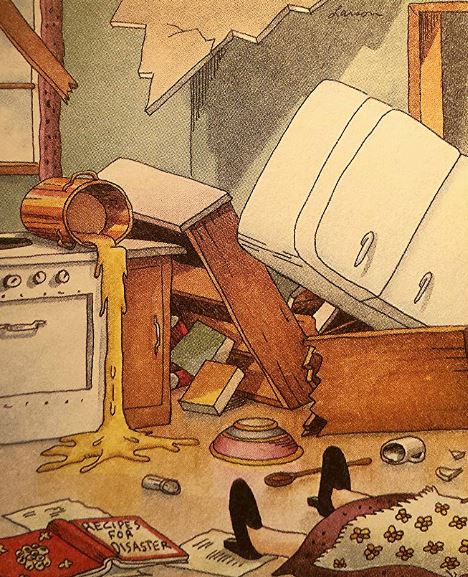 A MARKET CYCLE viewpoint on the future of investments (it should be easy to understand if you take it one sentence at a time):

If investors can sidestep (and profit during) the difficult periods, then investment portfolios will be many times higher than with buy & hold.  This is MarketCycle Wealth Management’s focus:  maintaining profits during bear markets and economic-recessions and even depressions.  For long-term trend-followers, bad times can become good for investment portfolios… and extremely bad periods can become extremely good periods.  I expect the United States to generally lead all other countries in relative strength over the next dozen years.  Although home-based in the United States, MarketCycle has a number of overseas clients and holds its accounts under our advisory but with (international brokerage) Interactive Brokers as our clearing-house.  Although we can and do hold global assets in our client’s portfolios there is a real tangible benefit to foreign clients diversifying into U.S. Dollars in these accounts.

What is the major RISK that investors must watch out for under the current conditions?  If President Trump (wrongly) increases fiscal stimulus during this already overheating late-stage of the market cycle, it could cause the stock market to shoot UP parabolic.  One would definitely not want to leave those giant gains on the table, but if it overshoots all reasonable valuations, then it would likely correct the overbought conditions by falling downward rather than sliding sideways.  Parabolic stock markets do not correct themselves by moving sideways, they fall.  Investors must watch carefully and prepare accordingly if this begins to happen.

As investors, we have to constantly remember this famous quote: 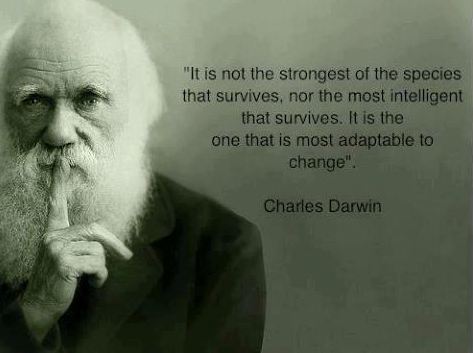 NOTE TO CLIENTS:  There is still time to create and fund RETIREMENT ACCOUNTS (Traditional-IRA, ROTH-IRA or even a SEP-IRA for those who are self-employed), just let me know.  TAX forms are available online per our February 9th client email… just sign in and click on “tax forms” and either print out or email to your accountant.