Red tape is a huge burden on the American economy, with even an Obama Administration bureaucracy acknowledging that costs far exceed supposed benefits.

And the problem gets worse every year.

If I had to pick the worst example of foolish regulation, there would be lots of absurd examples from the federal government, and the crazy bureaucrats at the Equal Employment Opportunity Commission probably would be at the top of the list.

But the worst regulations, at least if measured by the harm to lower-income Americans, probably are imposed by state governments. Yes, I’m talking about the scourge of occupational licensing.

A report published by The American Interest elaborates on this problem.

…it’s important that policymakers don’t lose sight of more subtle ways the government has distorted the economy to favor the politically connected. One example: Onerous occupational licensing laws that force people to undergo thousands of hours of often redundant and gratuitous training to perform jobs like auctioneering, tree trimming, and hair styling. …licensing laws are the result of higher-skilled professionals seeking to protect their market share at the consumers’ expense. …This not just a minor concern for a few key industries; it is a weight dragging down the entire economy, raising prices while blocking access to less-skilled trades. The Obama administration has already recommended that states look at ways to loosen these requirements.

Yes, you read correctly. This is an issue where the Obama Administration was basically on the right side.

I’m not joking. Here are excerpts from a White House statement last year.

Today nearly one-quarter of all U.S. workers need a government license to do their jobs. The prevalence of occupational licensing has risen from less than 5 percent in the early 1950s with the majority of the growth coming from an increase in the number of professions that require a license rather than composition in the workforce. …the current system often requires unnecessary training, lengthy delays, or high fees. This can in turn artificially create higher costs for consumers and prohibit skilled American workers like florists or hairdressers from entering jobs in which they could otherwise excel.

Senator Mike Lee of Utah is a strong advocate of curtailing these protectionist regulations and allowing capitalism to flourish. Using teeth-whitening services as an example, he explained the downside of government-enforced cartels in an article for Forbes.

Should only dentists be allowed to whiten people’s teeth? …This may sound like a silly question… Keep in mind that the Food and Drug Administration already regulates teeth-whitening products for safety and that virtually no one has ever been injured by someone administering these products. But in a number of states throughout the country, dentists began losing teeth-whitening customers to non-dentists who had set up kiosks in shopping malls and were charging less money for the same teeth-whitening services. These upset dentists then went to their state dental-licensing boards and urged those boards to add teeth whitening to the definition of “the practice of dentistry.” These state boards complied… The results were unemployed teeth whiteners, more expensive teeth whitening, and higher profits for the dentists. …An organized cartel (the dentists)…used the threat of government punishment to enforce their monopoly.

Unfortunately, Senator Lee explains, this is a problem that goes way beyond teeth whitening.

…when the deeper question of occupational licensing is applied to the broader economy, it turns out that there are millions of jobs and hundreds of billions of dollars at stake. …dentists are not the only professionals using government power to harm consumers and line their pockets. A 2013 study found that 25% of today’s workforce is in an occupation licensed by a state entity, up from just 5% in 1950. And the number of licensed professionals is not growing because everyone is suddenly becoming a doctor or a lawyer. Instead, it is the number of professions requiring licenses that is growing. Security guards, florists, barbers, massage therapists, interior decorators, manicurists, hair stylists, personal trainers, tree trimmers and auctioneers work in just some of the many, many professions that state legislatures have seen fit to cartelize.

But do consumers get some sort of benefit as a result of all this red tape?

According to a study by University of Minnesota Professor Morris Kleiner, “Occupational licensing has either no impact or even a negative impact on the quality of services provided to customers by members of the regulated occupation.” Occupational licensing has grown not because consumers demanded it, but because lobbyists recognized a business opportunity where they could use government power to get rich at the public’s expense. …Consumers end up paying $200 billion in higher costs annually, prospective professionals lose an estimated three million jobs, and millions more Americans find it harder to live where they want due to licensing requirements.

By the way, the barriers to mobility are a major problem. A professor at Yale Law School crunched the numbers and found that occupational licensing has undermined the great America tradition of moving where the jobs are.

Here are some details from the abstract of the study.

Rates of inter-state mobility, by most estimates, have been falling for decades. Even research that does not find a general decline finds that inter-state mobility rates are low among disadvantaged groups and are not increasing despite a growing connection between moving and economic opportunity. …governments, mostly at the state and local levels, have created a huge number of legal barriers to inter-state mobility. Land-use laws and occupational licensing regimes limit entry into local and state labor markets.

In an article for Reason, Ronald Bailey highlights some of the key findings from the scholarly study.

From the end of World War II through the 1980s, the Census Bureau reports, about 20 percent of Americans changed their residences annually, with more than 3 percent moving to a different state each year. Now more are staying home. In November, the Census Bureau reported that Americans were moving at historically low rates: Only 11.2 percent moved in 2015, and just 1.5 percent moved to a different state. …Yale law professor David Schleicher blames bad public policy. …Schleicher identifies and analyzes the policies that limit people’s ability to enter job-rich markets and exit job-poor ones. …Why? First, lots of job-rich areas have erected barriers that keep job-seekers from other regions out. The two biggest barriers are land use and occupational licensing restrictions. …Schleicher notes that more than 1,100 occupations require licensing in at least one state, but fewer than 60 are regulated in all states. A 2015 White House report on occupational licensing found that “interstate migration rates for workers in the most licensed occupations are lower by an amount equal to nearly 15 percent of the average migration rate compared to those in the least licensed occupations.” 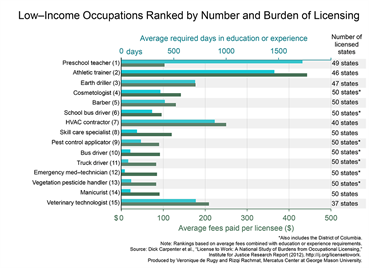 Imagine you don’t have a lot of education. And you definitely don’t have out-of-state licenses that are necessary for dozens of professions.

Are you going to move where there are more jobs?

Several decades ago, the answer likely was yes. Now, the incentive for mobility has been curtailed thanks to licensing laws that are really nothing more than regulatory protectionism.

Such laws should be repealed, or struck down by the courts as illegal restraints on trade.