Shake Shack is scheduled to announce its second quarter results tomorrow, after the market closes. Shake Shack is arguably the new face of the fast casual sector following Chipotle’s tumultuous year. After going public last year though, the stock has largely suffered. Investors have been skeptical on whether growth prospects can live up to the company’s lofty valuation. In the trailing four quarters both earnings and revenue growth has greatly decelerated, reassuring the market’s doubts. Estimates suggest that tomorrow’s report will follow the slowdown from recent quarters.

The Estimize consensus is looking for earnings per share of 14 cents, up 54% compared to the same period last year. That estimate has increased 7% since Shake Shack’s most recent report in May. Revenue is anticipated to come in 31% higher at $63.63 million, a marked slowdown from prior quarters. Shares of the burger chain are up nearly 7% year to date but have declined over 40% in the past 12 months. 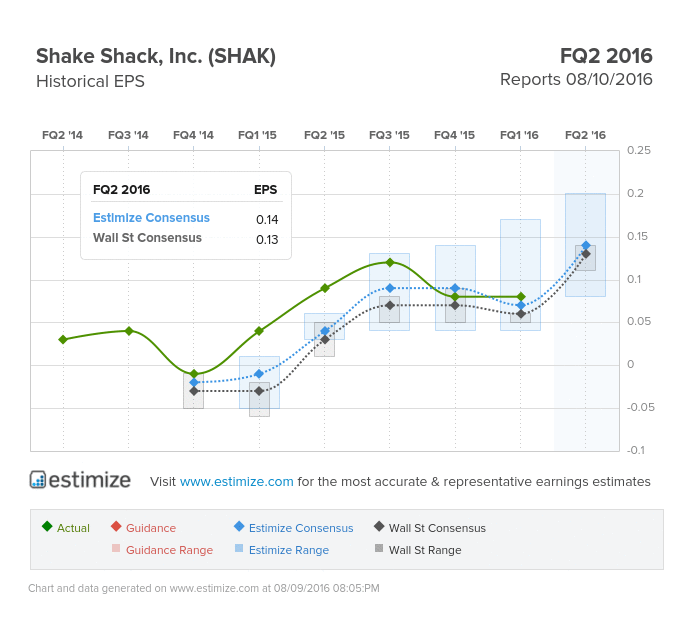 With just over 100 locations worldwide, the burger chain garners an immense amount of media attention for its innovative and limited time offerings. The recent launch of the Chick’n Shack at all domestic locations was a key driver of traffic and comparable shack sales. Continuing with its menu innovations, Shake Shack has introduced new promotional items including the Crispy Peking Chicken and the Roadside Double. This quarter the company is expecting to post same shack sales of 5.5% as these new menu items gain traction.

Shake Shack has certainly cashed in on its cult following and popularity in the United States. However, the ongoing slowdown along with weaker consumer spending are poised to take its toll. Shake Shack is still in expansion mode which has resulted in high operating expenses associated with opening new stores. Additionally, higher wages and rising beef prices since the beginning of the year are likely to pressure margins and profitability in the second quarter. If these factors contribute to a miss tomorrow afternoon, expect the stock to trend downward. 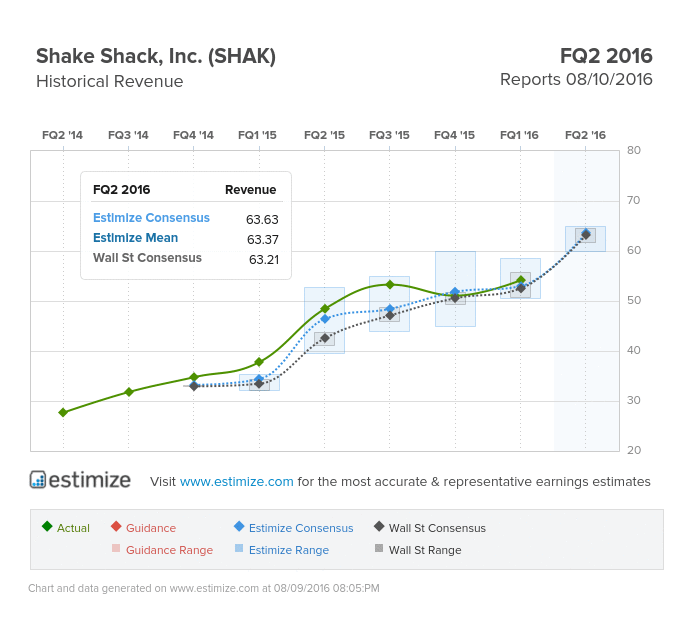 Do you think SHAK can beat estimates? There is still time to get your estimate in here!