The Estimize consensus is calling for earnings per share of 60 cents on $22.2 billion in revenue, 2 cents higher than Wall Street on the bottom line and nearly $100 million on the top. Compared to a year earlier this represents a 3% drop in earnings with sales expected to remain flat. Microsoft is seeing considerable downward revisions activity in the runup to its report, which is typically an indication of weak results. 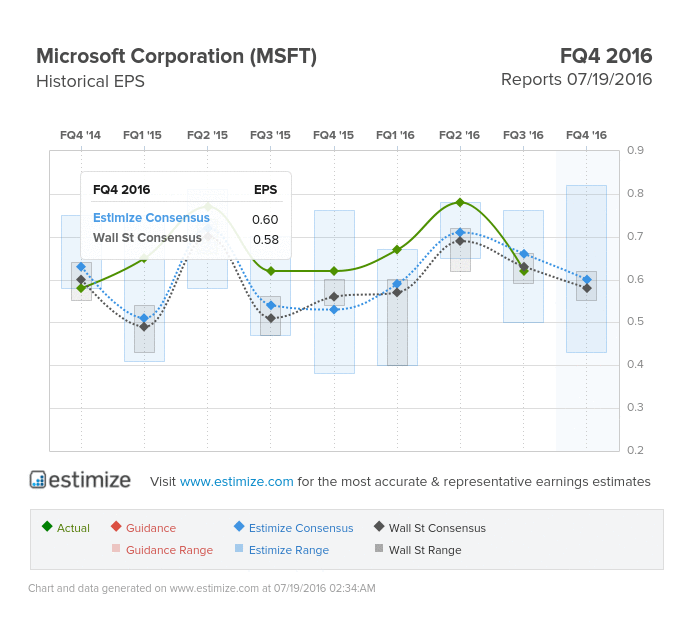 What to Watch: Earnings will likely be an afterthought this quarter with the LinkedIn acquisition dominating a majority of the conversation. It is expected that CEO Satya Nadella will use the analyst call to further expand on how LinkedIn will integrate in its core business. The deal has left investor’s perplexed about the price and intent, creating some tension heading into earnings.

Microsoft is probably best known for its operating systems but that has been the worst performing part of its business. It’s no secret that PC sales are struggling as demand continues to wane, and as such MSFT has shifted its focus away from this struggling business to its rapidly growing cloud business. Along with Amazon and Google, Microsoft tops most lists as the leader of in cloud products. Microsoft cloud suite currently includes Office 365, Dynamics CRM and Azure, which all reported gains of over 5% last quarter.

Based on initial reports, LinkedIn is expected to fit seamlessly into its CRM and cloud platforms as means to undercut Salesforce. Microsoft recently launched Dynamics 365 platforms, bundling its CRM and ERP solutions into one new platform. Integrating LinkedIn’s functionality will help sales professionals using Dynamics to seamless access qualified leads and drive sales.

Another thing worth looking out for is the impact of strong dollar and any discussion on Brexit. Microsoft has a huge international presence, and gets around 7 – 8% of revenues from the UK alone. Unfavorable exchange rates caused by Brexit will certainly impact the bottom-line.
Intel (INTC)

The Estimize consensus is calling for earnings per share of 55 cents on $13.56 billion in revenue, 2 cents higher than Wall Street on the bottom line and nearly in-line on the top. Compared to a year earlier, this represents a 2% decline in earnings while sales could grow by 3%. Intel consistently beats both the Wall Street and Estimize consensus sin 82% and 53% of recorded quarters, respectively. 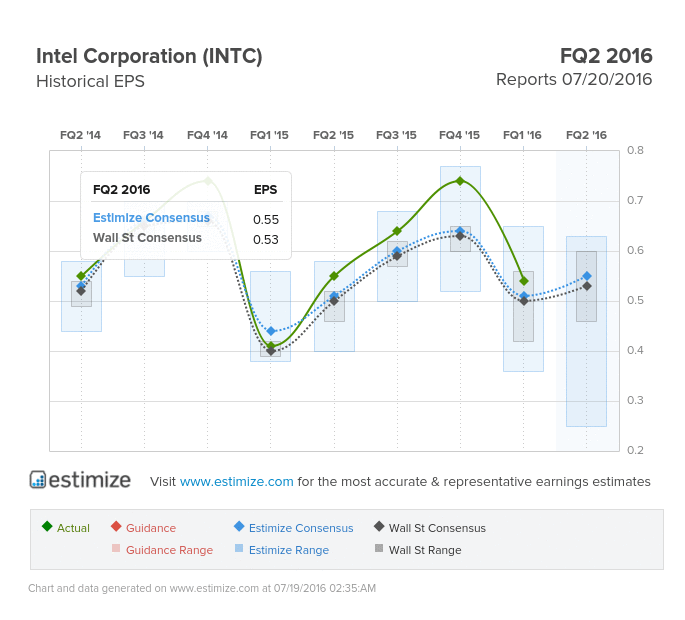 What to Watch: Intel kicked off fiscal 2016 with mixed results, trumping earnings expectations but missing its sales target, the main culprit being PC sales that declined by over 15%. Many analysts are optimistic that Intel can piece together a strong quarter after Micron Technology reported revenue growth in its PC segment. Q2 guidance was then lowered to mid mid single digit growth and plans were made to restructure the business. Apart from the restructuring process Intel announced it would cut 12,000 jobs, mostly in the weak PC sector. In doing so, Intel will shift its resources away from PCs towards high growth markets such as IoT, data centers, and 5G technology.

The company’s efforts in these areas have been apparent, allowing them to compete with Nvidia in terms of machine learning and collaborate with BMW and Mobileye to develop car technology. Meanwhile Intel is rumored to have secured orders with Apple to produce chips for the iPhone 7, a partnership once exclusive to Qualcomm. Intel also works with Google to produce chips in its Android operating system. Working with both Apple and Google propels Intel to one of the top spots in the mobile chip making business.

Some concerns that remain revolve around slowing growth in emerging markets, greater competition and macroeconomic risks. Having a hand in so many different sectors exposes INTC to wider competitive threats from companies such as Qualcomm, Advanced Micro Devices and NVidia. Additionally, the Brexit fallout and strong U.S. dollar will likely put a drag on earnings moving forward.
eBay (EBAY)

The Estimize consensus is looking for earnings per share of 43 cents on $2.17 billion in revenue, 1 cent above Wall Street on the bottom and right in line on the top. Compared to a year earlier this represents a 44% decline in earnings and 51% fall in sales. Fortunately the stock is a positive mover during earnings season. Shares typically make a 3% jump a month after earnings are announced. 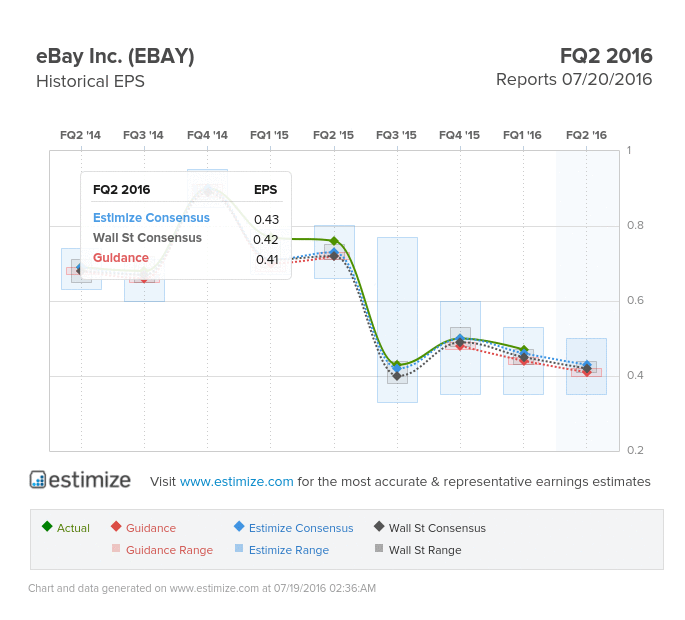 What to Watch: Online auction house, eBay is scheduled to report Q2 earnings this Wednesday, after the market closes. eBay is one of the pioneers of ecommerce, but has been falling behind Amazon and is now losing footing to WalMart’s rapid online growth. Meanwhile earnings are still struggling to rebound after the company spun off PayPal into its own publicly traded entity. As you might suspect, earnings have been lackluster lately, seeing a huge drop after PayPal went it own way in Q3 2015. Expectations remain relatively muted head into ebay’s second quarter report.

Online auctions have lost their luster in recent years and no longer look like a viable business moving forward. eBay has taken notice and is slowly abandoning its core business in favor of more “buy it now” options. Given its current struggles to gain traction in the ever changing consumer environment, the Brexit won’t do them any favors. Last quarter eBay pointed to strong performance in Germany and United Kingdom as a primary driver of revenue growth. With the Pound and Euro in a freefall over the past few days this should add to eBay’s woes.

The Estimize consensus is looking for earnings per share of $0.49 on $5.36 billion in revenue, in-line with Wall Street on the bottom line and $10 million on the top. Compared to a year earlier this reflects a 17% incline in earnings and 10% in sales. EPS estimates have increased 5% since last quarter, with revenues up 1%. 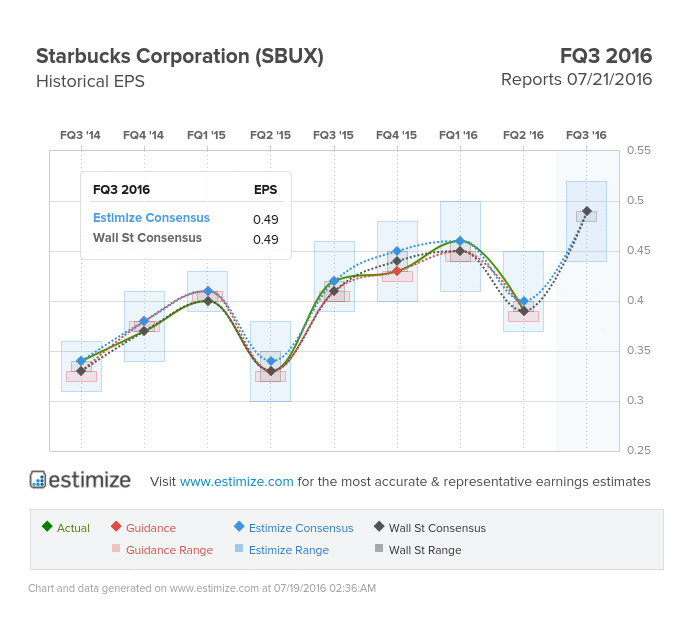 What to watch: In the past 2 fiscal years, Starbuck’s EPS and revenue have steadily increased, with the exception of fiscal Q2 2015 and 2016. Despite a penny miss in the latest quarter, it still stands as the strongest fiscal Q2 in Starbuck’s history.

As with most retailers, the most important number to watch is same store sales, which Starbucks grew by a whopping 6% last quarter. Impressive comps were driven by a 4% increase in ticket price and 2% increase in customer traffic over the period. CEO Howard Schultz only expects traffic to improve thanks to increased lunch offerings, a popular loyalty program and digital ordering capabilities.  Add to that an aggressive international expansion plan which aims to open up 500 new locations in China alone this year. The company is also bullish on India in the long term, although growth there has been relatively slow. Recent success in the consumer packaged goods (CPG) segment, which sells single-serve beverages and packaged coffees in grocery stores and other retail outlets, should also drive growth. This division was up 7% last quarter, officially making it the second largest retailer of packaged coffee behind Kraft.
Chipotle (CMG)

The Estimize consensus calls for EPS of $1.06, two cents lower than Wall Street’s consensus. Revenue expectations are also slightly lower than the sell-side, with the Estimize community expecting $1.045 billion, as compared to $1.050 billion. Earnings expectations have trended downward by 45% since last quarter, while revenue estimates are down 7%. This puts YoY growth expectations at -75% for EPS and -12% for sales. 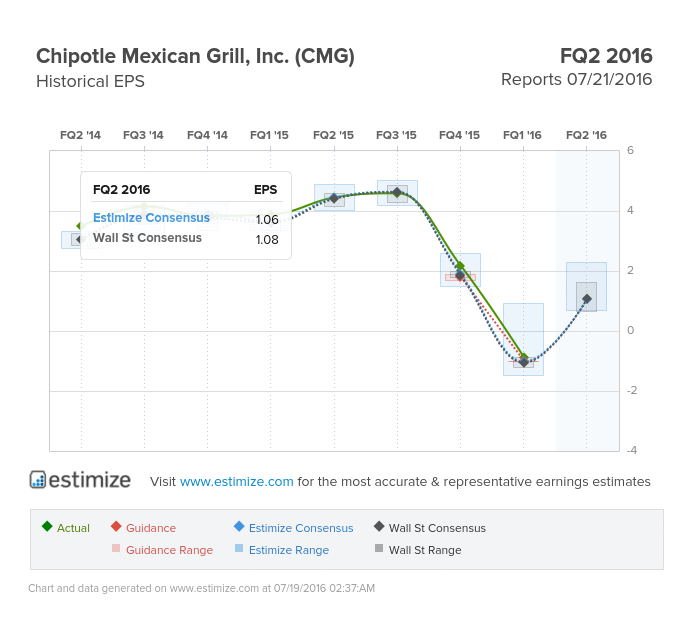 What to Watch: Chipotle is almost a year removed from its first health scare that started the downward spiral that they are still digging out of. The fast casual chain’s efforts to jumpstart sales through marketing and promotional campaigns haven’t yet gained traction. Financial performance continues to dip along with foot traffic as many consumers are still not ready to return to the burrito chain following the E.Coli and norovirus cases.

The first quarter of 2016 featured declines in every key metric: revenue decreased 23.4%, comparable sales were down 29.7% and operating margins slid 27.5%. It hasn’t helped that food prices such as chicken and beef have been rising while Chipotle also continues to raise wages for its in-store employees.

Chipotle hasn’t stopped its efforts to regain its past glory. Earlier this month, the burrito chain announced its three month summer rewards programs cleverly named “Chiptopia”. The customer loyalty promotion aims to attract customers with free food and credits for every visit during the summer months. There are three levels to the program (mild, medium and hot) which are scored by the number of visits in a given month. Burrito fans that achieve the hot status for all three months, the highest level of the program, receive free catering for 20 and free entrees along the way.

Customer loyalty programs are nothing new in the food industry. Starbucks is one of the most recent companies to test this promotional activity and has found booming success. Last quarter the coffee chain added 900k members and now has over 12 million active U.S. members. If Chipotle can find a fraction of the success as Starbucks, the burrito chain will be moving in the right direction.

How do you think these companies will report? Get your estimate in now!