Goldman Sachs Group Inc (NYSE:GS) Looks Like a Short Ahead of Earnings

Goldman Sachs is scheduled to report second quarter earnings Tuesday, before the market opens. The investment bank is the first of its peers to report earnings with results from Morgan Stanley on Wednesday. Since the 2008 Financial Crisis, investment banks and Goldman Sachs in particular have had trouble reporting growth and keeping share prices afloat. The industry has had to enforce more stringent compliance rules as they continue to accumulate lawsuits.

One of the biggest expenses the bank has seen in recent years has been from settling cases and litigation fees. Earlier this year Goldman reached a deal to pay $5.1 billion to settle claims of faulty mortgages which resulted in dismal first quarter results. The quarter reported revenue that decreased 40% and earnings that fell a resounding 55%. Unfortunately Q2 results are shaping up to be just as bad as past quarters. 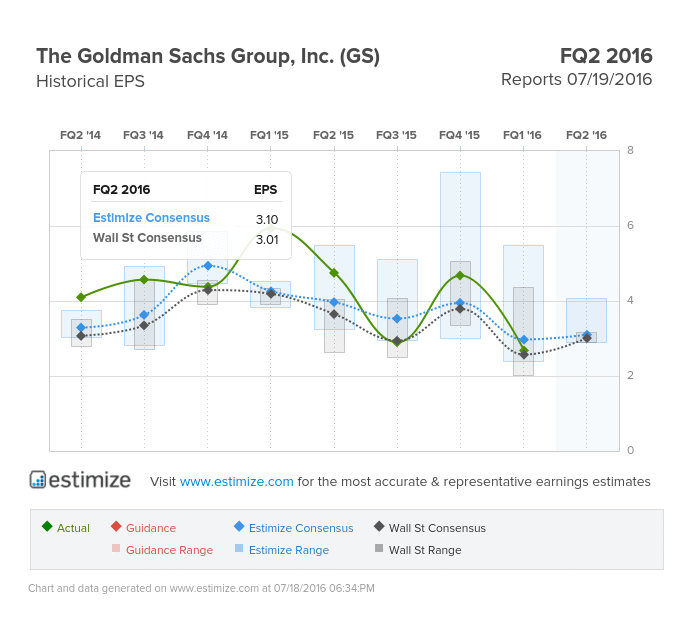 The Estimize community is looking for earnings per share of $3.10 on $7.62 billion in revenue, a 34% decline on the bottom and 14% the top. Estimates have come down by double digits since its last report, reflecting analysts negative sentiment towards the industry.
There are several macroeconomic roadblocks that are expected to impact the industry over the second half of 2016. The current circumstances surrounding Brexit and the Presidential election have the highest probability of disrupting earnings moving forward. Goldman could continue to cut jobs if earnings continue to suffer. The company recently let go 55 employees in its NY office, marking the fourth round of layoffs in 2016.

The banking giant promised investors it will cut costs to offset the industry woes and it’s disappointing financial performance. Persistently low interest rates, tough regulations, and volatile markets have kept profits down lately. In particular, the company has seen a sharp drop in investment banking and M&A activity, the bread and butter of its business. Apart from reducing costs, there is a plan to outsource jobs to India and hire cheaper and younger workers. Based on some of these moves, it appears as if Goldman expects its troubles to linger. 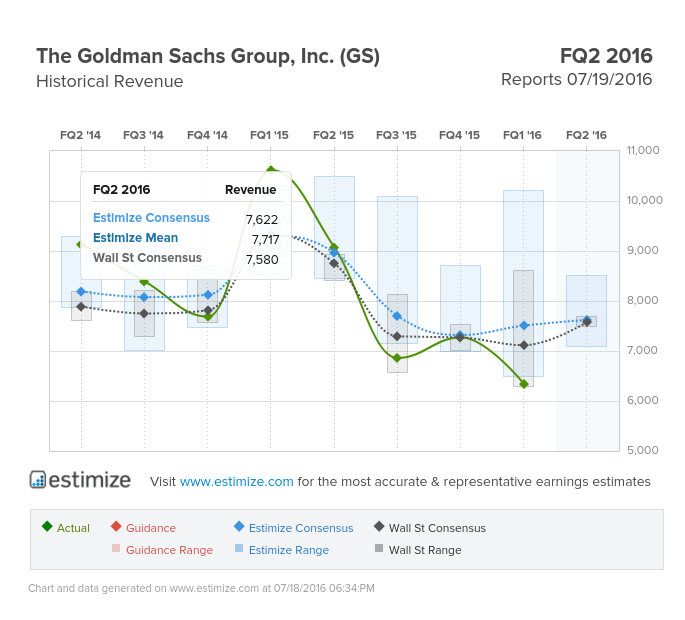 Do you think GS can beat estimates? There is still time to get your estimate in here!