ATVI, EA, TTWO – These 3 Companies Will Reach a New Level this Earnings Season

The video game industry has drastically changed since its early beginnings with Atari in the 1970s. Modern day consoles have become powerhouses that replicate some of the most powerful computers. They are no longer a pastime activity but an investment. Sony’s PS4 or Microsoft’s Xbox One can run you upwards of $300 which doesn’t include additional controllers or the games themselves. Still, the video game industry continues to expand, accumulating more revenue than the movie and music industry. As the highest gross form of entertainment it’s no surprise that video games studios are also a great financial investment. Many of the industry’s biggest publishers have seen their stocks skyrocket on new content, strategic acquisitions and a transition towards digital offerings. With earnings season on the way, investors should keep an eye on Electronic Arts, Activision Blizzard and Take Two Interactive. 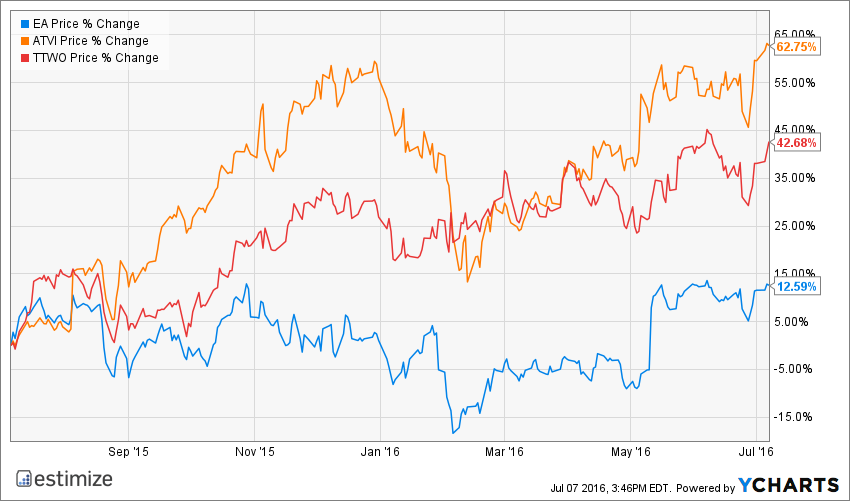 Electronic Arts (EA) Information Technology – Software
Electronic arts has made major leaps the past year, largely from the success of its sports titles like Madden and Fifa, as well as Star Wars: Battlefront. The latter had a huge impact on both Electronic Arts and Hasbro, which debuted Star Wars related products prior to the premiere of The Force Awakens. Meanwhile, Madden and Fifa habitually grace the top 10 selling video game lists year after year. Simply updating rosters and improving graphics ever so slightly have gamers drooling. As a result, EA saw increases across many of its key metrics in fiscal 2016. Of the $4.4 billion in revenue, 55% of it came from digital offerings. Downloadable content is slowly replacing the trek to GameStop and are often publishers fastest growing source of income. EA has also emerged in the rapidly expanding mobile space. Madden Mobile is one of the most popular mobile games, donning the Apple store’s top 10 grossing apps. The Estimize community is doubtful that EA can keep it up. Estimates have been in a whirlwind lately, dropping by double digits in the past 3 months. The consensus data is currently calling for flat year-over-year earnings on $660.42 million in revenue, reflecting a 91% decline on the bottom line and 3% on the top.
Electron Rises 5.1% Buy Renewable And Infrastructure Stocks: Q1 Letter

Activision is perhaps the most attractive of the three big gaming publishers. The company is firing on all cylinders and should have no problem topping expectations this quarter. Earnings will be largely driven by the success of its new flagship game, Overwatch. In its short shelf life, the game is estimated to have sold 8 million units, double than what was previously expected. Overwatch has been a huge success, slowly replacing League of Legends in a large number of competitive gaming circles. Fortunately the game is still in its early days and Activision should be reaping these benefits for a long time. Like its peers, Activision is also gaining traction in its digital offerings and mobile gaming. The company only recently acquired Candy Crush maker, King Digital, which has helped position them as a top mobile game maker. The Estimize community is optimistic heading into Activision’s Q2 earnings report. The consensus data is calling for earnings per share of 42 cents on $1.47 billion in revenue, a 203% increase on the bottom line and 81% on the top. Shares have generally reacted well during earnings season, rising before and after a report.

Video game publishers have greatly benefited from a transition away from physical games towards digital downloads. Electronic Arts, Activision-Blizzard and Take-Two Interactive have seen shares increase over 15% thanks to increasing revenue from the digital space. For Take-Two, the ongoing success of its Grand Theft Auto and 2k Sports series has produced huge financial prosperity. The GTA and NBA 2K franchises both headlined a list of the top 10 best selling games of 2015. Fiscal 2017 is poised to be another strong year for Take-Two with new and innovative titles prepared to hit shelves in the coming months. However, without a new Grand Theft Auto game until 2018, it might be hard to replicate the runaway success from past years. The Estimize community is still high on this name to post better than expected earnings. The stock has typically tracked earnings, increasing 2% through a report and 3% in the month following. Shares are up 43% in the past 12 months with the a strong possibility of breaking out on another strong report.

How do you think these names will report this season? Be included in the Estimize consensus by contributing your estimates here!