ValueWalk
Home Stocks Is it Time to Short the FANG Stocks?

Is it Time to Short the FANG Stocks?

Last year Jim Cramer coined the term FANG when discussing the success of Facebook, Amazon, Netflix and Google (Alphabet). The 4 companies were some of the most successful of 2015 with share prices nearly doubling in that time. They have also been some of the most widely watched names with any news or movements enough to sway public opinion. The group’s success however may have been overstated. In the first quarter of 2016, two of the four companies reported down earnings that sent shares plunging. Shares of Netflix and Google are currently down on the year while Amazon and Facebook stock have made slight gains. Early indications for the upcoming earnings season look as though FANG will maintain its consistency. 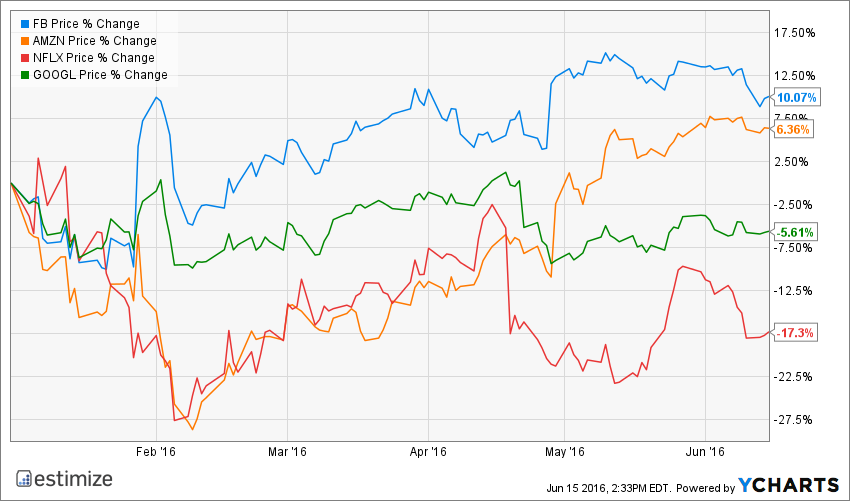 Lately, there are only a few names that can do no wrong in the eyes of Wall Street, and Facebook is one of them. The social media giant unsurprisingly bested its first quarter earnings with a user base that hasn’t stopped growing. The quarter featured double digit gains in monthly and active users with ad revenue growth skyrocketing over 50%. Active users should sustain their current growth levels but Facebook is more than just a social media company at this point. The company’s acquisitions of WhatsApp, Instagram and Oculus Rift have already exhibited robust growth.

Estimize is high on Facebook to maintain its success into the second quarter. The consensus data is looking for earnings per share of 83 cents on $6.01 billion in revenue, 2 cents higher than Wall Street on the bottom line and $20 million on the top. Compared to a year earlier this reflects a 64% increase in profitability and 49% revenue growth. In the last month, per share estimates have increased 16% and should continue to rise as we near its report date. For shareholders, strong earnings have contributed to the 50% gains in the stock.

If any company has done a better job at garnering attention than Facebook, it’s Amazon. The Jeff Bezos led company has been pushed to the top of investor’s lists after it finally turned a profit in Q2 2015. Since then the stock is up nearly 70% while steadily making gains on the bottom line. Many experts now believe Amazon will become the first trillion dollar company and cross the $1000 per share threshold, at title previously believed to be Apple or Google’s.

Amazon’s turn to profitability has been largely driven by the success of Amazon Web Services. AWS is the preeminent leader in cloud space, hosting many of the world’s largest websites including Netflix, Expedia and Verizon Wireless. The company also continues to make headlines as Jeff Bezos opens up about his long term goals for the company. Amazon is already working on making Alexa recognize emotions and just invested north of $3 billion to begin operating in India. Not surprisingly the Estimize community is high on Amazon heading into its second quarter results. Analysts on Estimize are looking for earnings per share of $1.18 on $29.72 billion, reflecting a 494% increase on the bottom line and 27% on the top.

Netflix is not like the other names referenced in the FANG acronym. Facebook, Amazon and Alphabet are all mega cap companies building on their multi billion dollar empires while NFLX is simply riding the wave of cord cutting habits. Netflix is troubled by weak earnings with strong revenue growth, a theme impacting many of today’s tech companies. And despite beating earnings last quarter, Netflix shares fell by more than 10% thanks to weak forward guidance on membership. Netflix must also compete with one of its FANG companions in Amazon. Amazon recently debuted a new plan that would users to access its video library for a cost slightly less than a traditional prime membership. The Estimize consensus anticipates that past earnings themes will persist this quarter. Analysts are looking for earnings per share of 3 cents on $2.11 billion in revenue, reflecting a 27% decrease on the bottom line and 28% increase on the top. Per share estimates have been cut 29% since Netflix’s last report, reflecting the heavy pressures they continue to see on margins.

Investors were finally given what they wanted when Google adopted a new operating structure which would detail the financial performance of its moonshot investments. These projects were always hidden and now investor’s might be doubting whether they actually want those numbers. Last quarter’s shocking miss on both the top and bottom line was potentially due to Alphabet’s “other bets” line, which took an $800 million loss. Its performance was substantially worse than a year prior with a portion of that loss coming from currency headwinds. Alphabet can only rely on Google’s advertising revenue to carry earnings for so long. The sector continues to report double digit gains as online marketing is more important than ever but that could change in the near future. Alphabet must prove that its moonshot investments are not a waste of money but a revenue generating idea. The Estimize community is still optimistic that Alphabet will turn it around sooner than later. The consensus data is looking for earnings per share of $8.10 on $16.95 billion in revenue, slightly higher than the current Wall Street estimate. Compared to a year earlier this represents a projected 17% increase on the bottom line and 18% on the top. Despite being down year-to-date, investors won’t be reeling for long if Alphabet can hit its number this quarter.

How do you think these names will report? Be included in the Estimize consensus by contributing your estimates here!