Is Zynga Inc (ZNGA) in Trouble this Quarter?

Mobile game manufacturer, Zynga is scheduled to report first quarter earnings Wednesday, after the market closes. Zynga has benefitted from strength in the mobile gaming market, beating revenue in each quarter of fiscal 2015. Unfortunately, the stock hasn’t tracked earnings and is down 12.5% since the start of the year. Lately, earnings have also suffered with Zynga failing to turn a profit in the last 2 fiscal years. Expectations are relatively low ahead of earnings as estimates have been cut 16% and sales 7%. As a result, Zynga is looking for a 1 cent loss on $164.58 million in revenue according to the Estimize consensus. Compared to a year earlier this represents a 10% increase on the bottom line, while sales are expected to decline 9%. Given Zynga’s volatile earnings it’s not surprising that the stock typically drops 2% through earnings. Due to the nature of the gaming market, Zynga’s success hinges on whether or not they can release a new viral game. 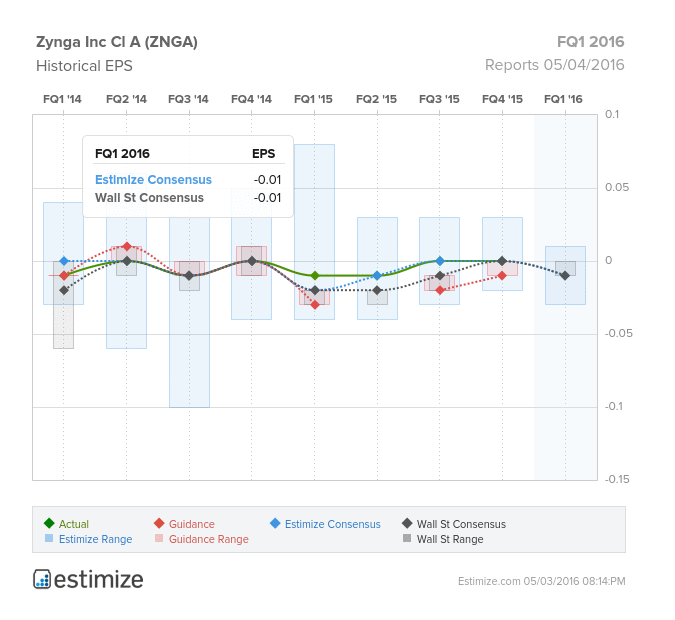 Despite coming off a positive earnings and revenue surprise in Q3 2015, those results aren’t expected again for the foreseeable future. The company has failed to release a hit game since their FarmVille and Texas HoldEm Poker games. Since its partnership with Facebook ended, even its flagship game, FarmVille, has decreased in popularity, after hitting a peak of 80M players in 2010. Two of the company’s most important metrics, daily active user (DAUs) and monthly active users (MAUs) have plunged as the company searches for a new growth catalyst. In Q4, DAUs were down 24% YoY while MAUs were down 30%. Meanwhile, Zynga faces intensifying competition from Glu Mobile, Electronic Arts, and King Digital. Fortunately, highly anticipated games in CSR2 and Dawn of Titans were released this quarter and should help bolster Zynga’s portfolio of games. 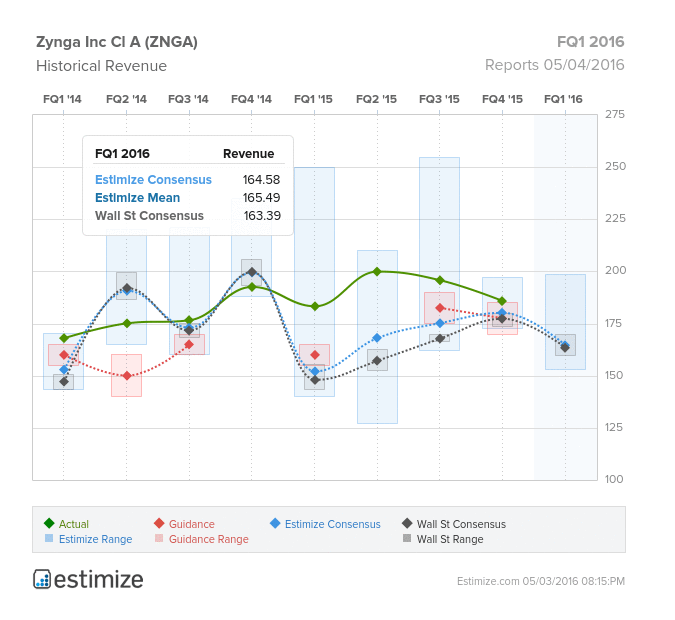 Do you think ZNGA can beat estimates? There is still time to get your estimate in here!