Can Lululemon Athletica inc. (NASDAQ:LULU) Continue to Compete With Nike in Athleisure? by Estimize

Athleisure has been one of the fastest growing segments throughout the apparel industry supported by big names like Nike and Lululemon (LULU). This trend meets an overwhelming demand for fashion forward styles that can be worn in the office or at the gym. Much of Lululemon’s success has been tied to this burgeoning space resulting in high hopes for its earnings. In early January, the upscale retailer raised its fourth quarter guidance after holiday season sales exceeded expectations. The company raised its forecast as high as $695 million from $670 for the quarter ending Jan 31. The Estimize consensus, on the other hand, is calling for EPS of $0.80, right in line with Wall Street, and revenue expectations of $690.04, $2 million below the Street. However our Select Consensus, which more heavily weights historically accurate analysts and recent estimates, is expecting a loss of $2 million on the top line. Compared to the year prior, this predicts as a 2% increase in earnings while revenue is expected to grow 14%. On average, Lululemon beats on earnings, trumping the Estimize community and Wall Street in 63% and 93% of reported quarters, respectively. 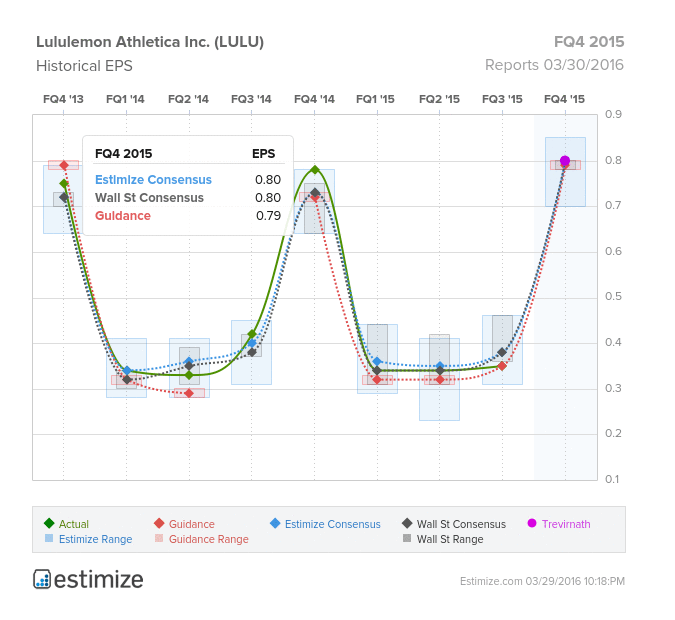 This past quarter was highlighted by a 14% increase in revenue supported by growth in key channels including comp store sales and direct to consumer revenue. Lululemon remains focused on undertaking new investments and initiatives to strengthen its position in the burgeoning athleisure space. In particular, the revamped womens bottom segment and the introduction of men’s clothing has accelerated same store sales growth and improved margins. Lululemon remains well positioned to sustain its high income core customers but must remain aggressive to stave off competitive threats from Nike and other smaller yoga brands. Moreover, currency headwinds and weak economic conditions have severely inhibited Lululemon’s growth strategy.
Do you think LULU can beat estimates? There is still time to get your estimate in here!

The Price is Right With Dimensional Fund Advisors’