Will the “Star Wars Effect” help drive  Walt Disney Co (DIS) Earnings Tonight as it did EA and HAS?

Walt Disney (DIS) is scheduled to report its FQ1 2016 earnings February 9, after the market closes. Despite beating on the bottom line quarter after quarter, Disney shares have failed to reflect this trend. In the past 3 months Disney shares have plunged 22%, even with the success of Star Wars: The Force Awakens. This quarter the Estimize consensus is calling for EPS of $1.46, just two pennies higher than Wall Street, and revenue of $14.909 billion vs. the Street’s $14.928 billion.  Compared FQ1 2015, this represents a projected YoY increase in EPS and revenue of 15% and 11%, respectively. The success of the new Star Wars movie should be enough to offset Disney’s slumping television business. 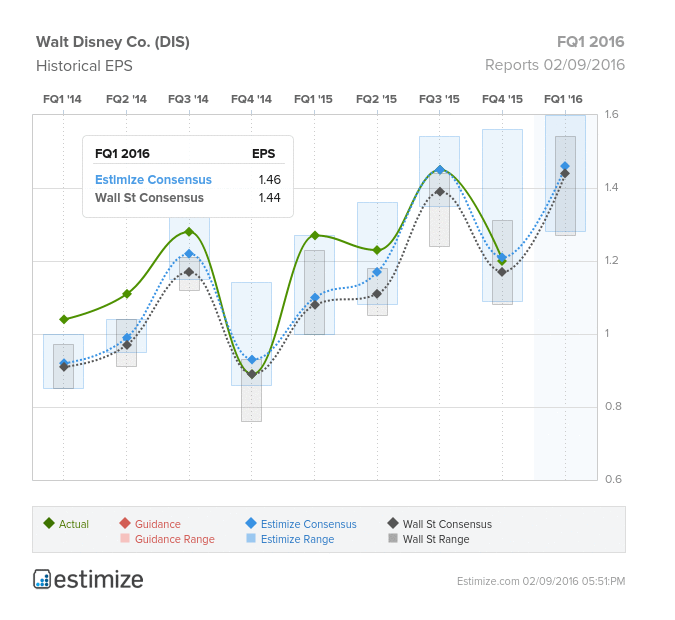 Shares of Walt Disney have struggled for some time now as Disney’s crown jewel, ESPN, comes under considerable pressure. ESPN has struggled to stimulate subscription growth as consumers transition from traditional cable packages to online TV content. The widespread adoption of  mobile content has lost ESPN 3 million subscribers in fiscal 2015 alone. In television, diminishing subscribers are associated with lower payouts from cable providers and thus lower revenue. If ESPN continues to struggle, Disney might find it difficult to fund expensive ventures like its $1.9 billion “Monday Night Football”  deal with the NFL. 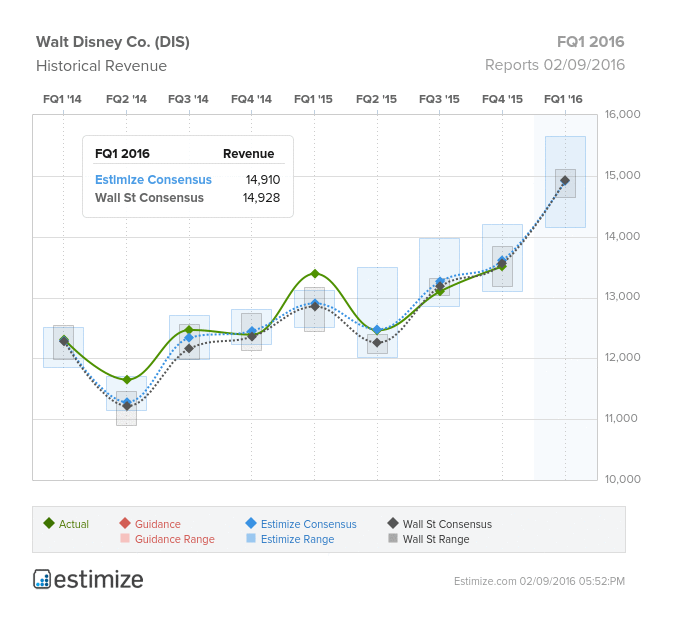 On the bright side, Disney Studios is poised to deliver robust earnings on the back of Star Wars: The Force Awakens. The most awaited film of 2015 lived up to the hype and more, collecting $2.8 billion worldwide and surpassing James Cameron’s Avatar as the highest-grossing film of all time in North America, yet is still slightly behind that film and Gone with the Wind for the world title. On top of box office sales, the parks & resorts division is expected to stimulate bottom line growth. In 2015 attendance at Disney theme parks grew 15%, as Disney remains dedicated expanding and reinventing its parks. This year, Disney is prepared to open Star Wars themed attractions, riding the wave of its wildly successful movie.

Do you think Walt Disney can beat estimates? There is still time to get your estimate in here!