Gilead Sciences, Inc. (GILD) Faces its Greatest Threat to its Hepatitis C Drug: How Will That Impact Earnings? by Estimize

Gilead Sciences (GILD) expects to close an impressive 2015 when it reports fourth quarter earnings February 2, after the bell. The past four quarters Gilead posted positive earnings surprises of 5.9% and is expected to beat again this Wednesday. Gilead is the market leader in Hepatitis C treatment which has largely contributed to the company’s recent success. The drug is expected to strengthen its position and generate meaningful contributions to Gilead’s Q4 top line despite increased competition. This quarter the Estimize consensus is more bullish than Wall Street, calling for EPS of $3.06, eight cents above the Street’s consensus, and revenue of $8.18 billion, $73 million higher than the sell-side. Compared to Q4 2014, this represents a projected YoY increase in EPS and revenue of 26% and 12%, respectively. Besides improving its Hep C drug, Harvoni, Gilead is expected to grow its other core offerings including HIV and Hep B treatments. 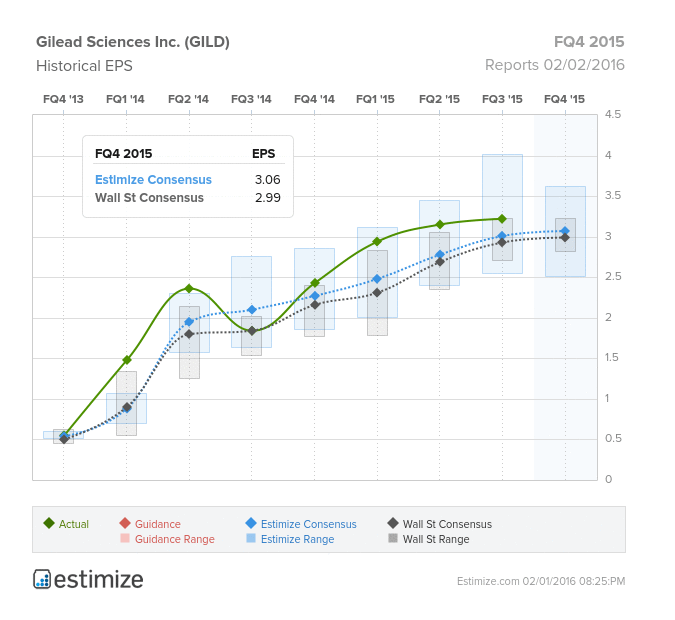 Coming off a solid string of robust growth, Gilead continues to impress shareholders with a strong portfolio of antivirals. Its Hep C medicine, along with other antivirals account for over 90% of the company’s revenue stream. Fortunately, these drugs have performed well, but Gilead will be faced with roadblocks in the near future. Merck was recently approved to release its rival Hepatitis C drug. Merck’s treatment imposes a direct threat to Gilead especially since the drug is cheaper than Harvoni. While Harvoni continues to post impressive sales, the drug is experiencing diminishing returns which will be impacted as competition intensifies. With the emergence of Merck’s new drug, Gilead would be wise to fine tune its other antiviral products outside of its Hep C drugs. Moreover, Gilead is expecting to encounter multiple obstacles in its robust pipeline. That said, pending drug approvals and potential takeovers will provide Gilead with a much needed boost to its top line and portfolio. 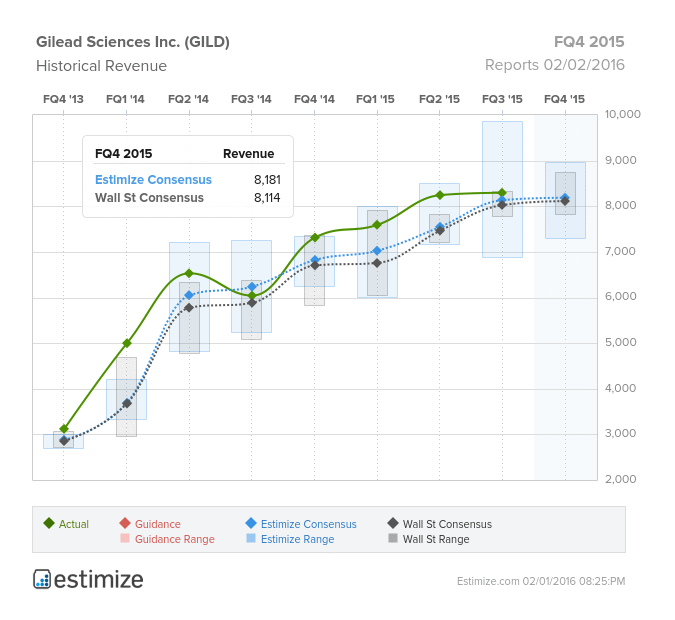 Do you think Gilead Sciences can beat estimates? There is still time to get your estimate in here!