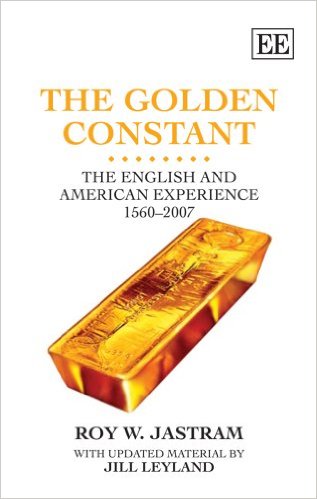 Analytical point #1: CPI is a meaningless measure to determine the future dollar price of gold.  CPI is an arbitrary government statistic. You are comparing gold in US Dollars (apples) with an index of oranges, grapes, raisins, etc.)

You must have mentioned this to stay employed at Ackman’s hedge fund.

The Futility of Price-Inflation Measurements

The practical problems with price indexes such as the CPI are the issues of whichprices are to be measured and what “weights” will be assigned to what goods. Another problem is deciding what to do about changes in quality. For example, what do you do when Apple introduces a new and improved iPhone at the same price as the previous version?

Those sorts of adjustments do not seem fair to most normal people. If you are eating more ramen noodles and fewer lamb chops you can take little comfort in the fact that that the CPI is staying inside the Fed’s target range. Moreover, under the system of hedonic adjustments, every time entrepreneurs and engineers come up with better products for consumers at lower prices, the Fed takes credit for keeping inflation under control.

Why hasn’t the CPI picked up since 2008? https://mises.org/library/problems-cpi

The first thing to keep in mind is that the CPI is not an economic variable. It is a statistic that at best gives an inaccurate picture of an economic phenomenon: inflation. To calculate the monthly CPI, the US Department of Labor takes a weighted average of prices of various things that consumers purchase, and then its statisticians try to figure out the various proportions of different items in a “mythical” household budget. For example, the statisticians may hold that housing costs are 30 percent of household expenditures, food costs 20 percent, gasoline another 15 percent, and so on.

L O N G periods of time. Gold is the “golden constant” (Jastram).  Look at research over the past 600 years: RoyJastram-TheGoldenConstant

In contrast in the late twentieth and early twenty-first century it was the market price of old which adjusted so that the purchasing power of gold relative to general prices returned to a constant.

Other main points to glean are:

In choosing the title The Golden Constant, Jastram did not imply that there was an absolute mathematical rule to which the purchasing power of gold adhered, but rather that gold exhibited the qualities of constancy in a wider sense. The fact that gold is almost immune to corrosion, rust or decay is one element of this. The metal has an enduring attraction for humankind. Also, the purchasing power of gold, while in fluctuation, returns over the centuries and in different countries to a broadly stable level is testament to all these elements of its constancy.  How many grams of gold to purchase cattle in Rome vs. today in Cedar City, Utah?  Not much difference despite the thousands of years of time and the different local.

You then advise Ackman that if investors lose faith in Central Banks’ ability to manipulate both credit and investors, then gold might be a safer place to hold wealth than dollars.  You then instruct Mr. Ackman to carefully view this video.

In all seriousness, you should have learned two concepts:

Be careful in comparing data sets.  CPI is useless.

If you choose to research an asset or money, then study ALL its history. Don’t look at just the most recent past.

The key to booms and busts https://mises.org/library/malinvestments-and-interest-rates

HAVE A GOOD WEEKEND!