The average developed European stock is up ~7.5% so far this year– not bad, considering all of the geopolitical drama and lackluster economic data of late.  Given the potential risks associated with the region (especially when viewed relative to peers in Asia or America), we find it somewhat surprising that the leaders in Europe are not concentrated in more defensive sectors such as Health Care and Consumer Staples.  While those counter-cyclical groups have performed well so far this year, the best performer on an absolute basis is actually the Consumer Discretionary sector:

…and keep in mind that sales and earnings growth, as well as the changes in estimates of those growth rates, is one of the most important factors in explaining European equity performance… 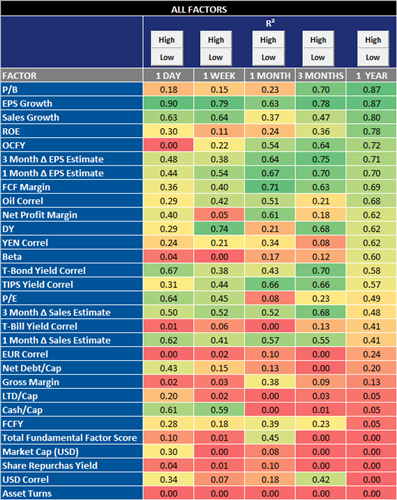 …it seems to make more sense that 77% of European Consumer Discretionary companies have performed positively so far this year.  In fact, 70% have outperformed the MSCI World Index benchmark year to date– putting the sector second only to Consumer Staples (in which 78% of constituents are outperforming) and significantly better than the Energy and Utilities sectors (where 63% of companies are underperforming the index so far this year).

Price performance isn’t everything, however, and loyal readers are familiar with our quest to identify and invest in undervalued and overlooked Knowledge Leaders within our universe of stocks.  About half (45%) of European Consumer Discretionary constituents pass our screen, with the remainder failing primarily on account of too little investment in Intellectual Property, too much financial leverage, or a combination of the two.  These 53 companies spend an average of nearly 9% of sales on intangibles such as advertising and firm-specific resources (in addition to another 1% of sales on R&D activities): 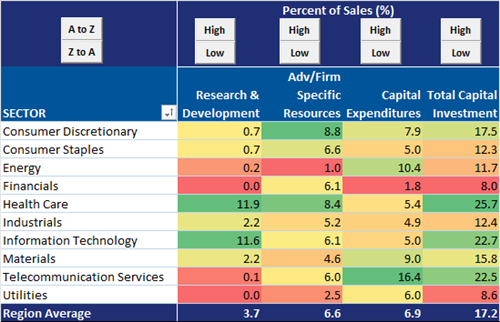 Considering that sales growth in the sector has been more than 2x the average for all European companies over the last three years, this amounts to substantial investments in IP:

Ultimately, those investment in intangibles lead to quite respectable metrics (on average) such as 46% gross margins, 17% ROIC, and free cash flow equivalent to almost 10% of sales. 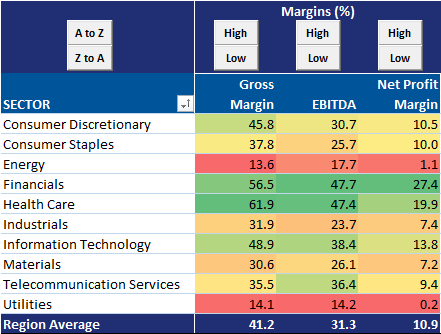 All of this comes at a price, however, and like nearly every other sector in Europe, that price is high relative to both MSCI World and ten-year average valuations: 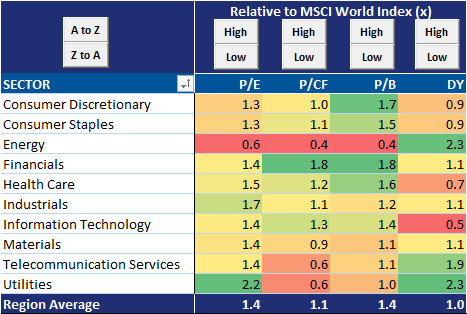 So we have 53 high quality, relatively expensive, knowledge-rich companies to consider– how do we help narrow the field?  We come back to price performance and, more specifically, relative strength price performance– because even if a company has great looking fundamentals, if it is underperforming the benchmark we don’t want it in our portfolio.  A quick look at our proprietary relative strength point-and-figure charts reveals a few names worthy of further consideration on the basis of two important formations: break-outs and bases. 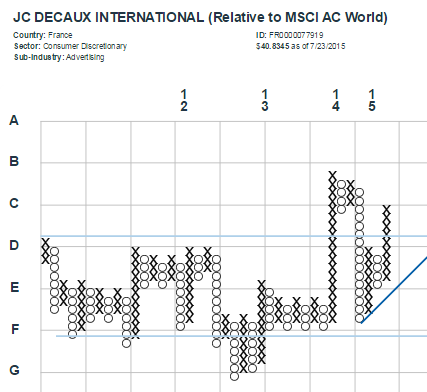 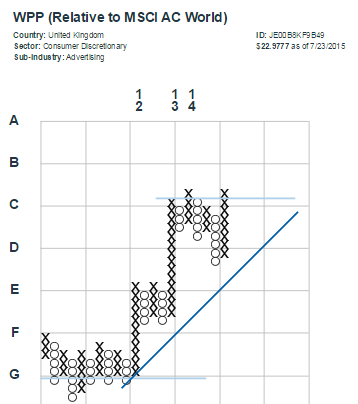 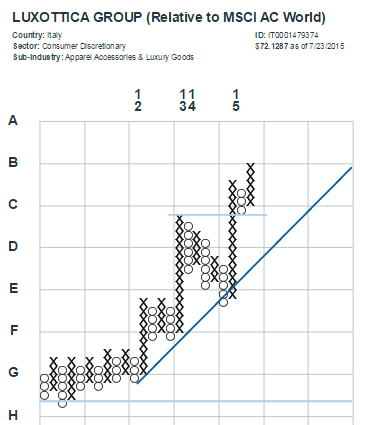 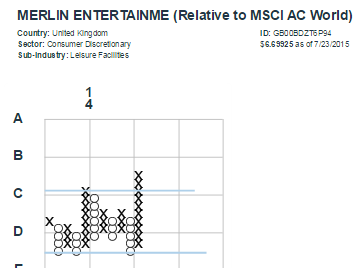 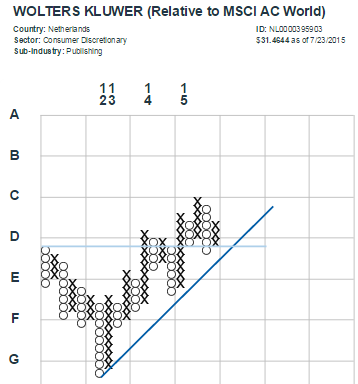 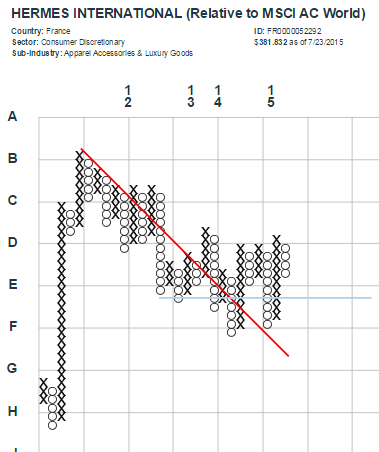 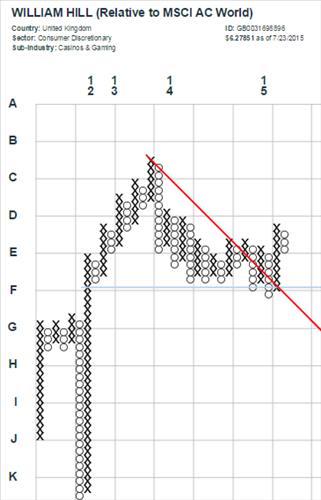 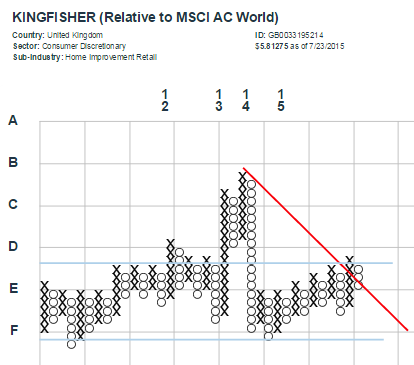 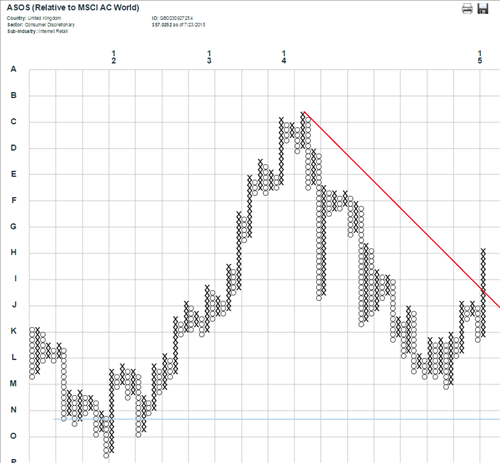 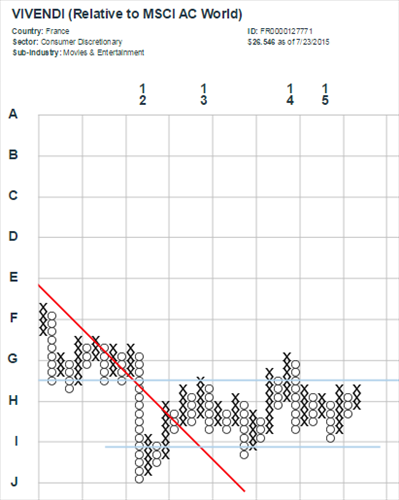 Of course, there is always the chance that a preceived ‘break-out’ turns out to be more of a ‘fake-out’, especially in some of the more extended or prolonged charts above.  Which is why we tend to prefer stocks that are beginning to move up from a substantial period of base formation.  Support is often much nearer and there is generally more opportunity for sustained relative strength outperformance.