China is now firmly in stimulus mode when PBOC announced on Sunday to cut the reserve-requirement ratio by 1% to 18.5% effective April 20.  This is the second reduction this year and the largest since November 2008 during the global financial crisis. The reserve-requirement ratio represents the minimum fraction of customer deposits and notes that each commercial bank must hold as reserves in cash.

The new 18.5% ratio required by China is still higher than the typical global standard and than the current 10% cap by the U.S. Federal Reserve.  The PBOC also announced an additional 100 bps cut for rural credit cooperatives and village banks, as well as a 200 basis point cut for the China Agricultural Development Bank. 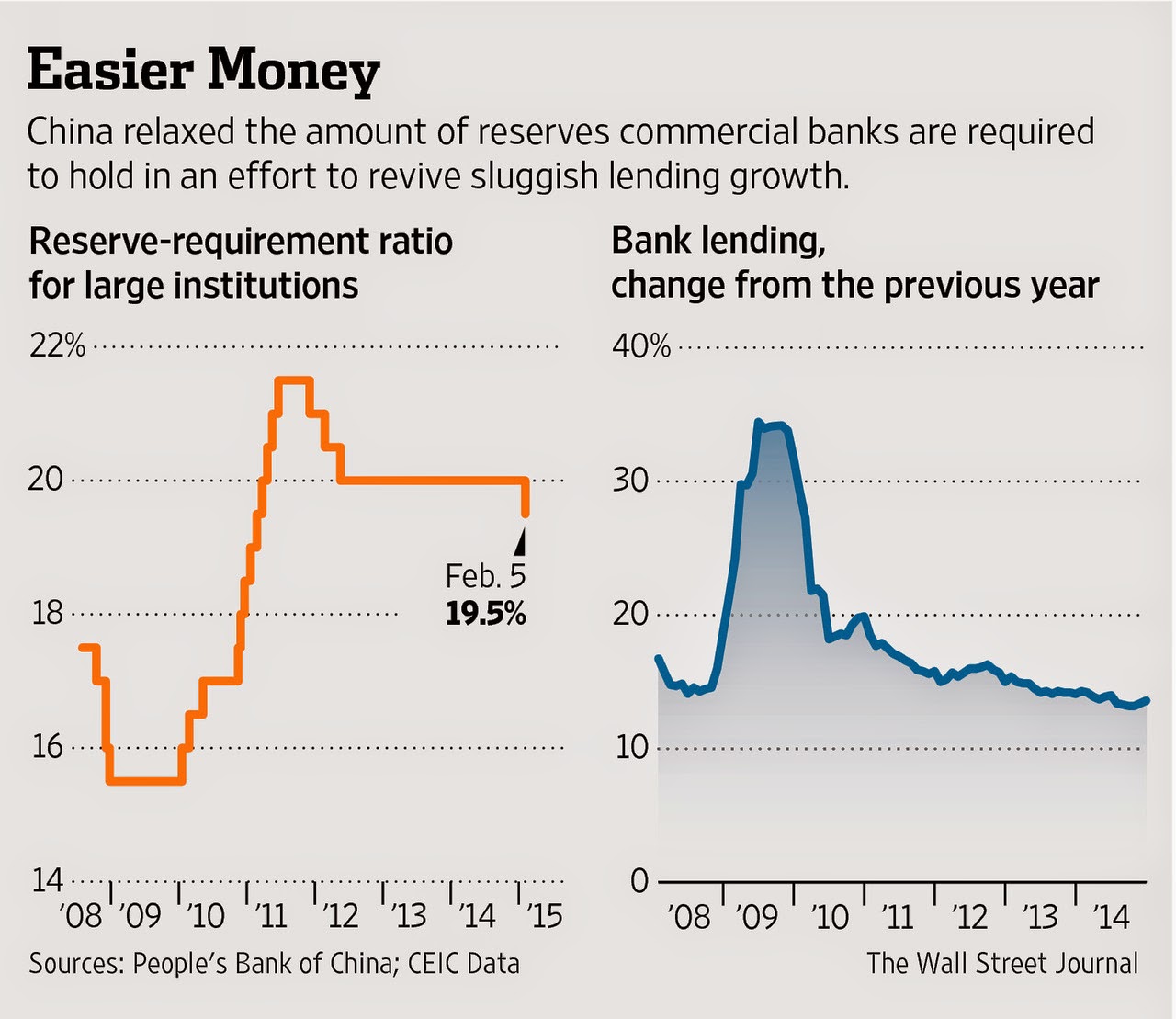 Bloomberg quoted Larry Hu, head of China economics at Macquarie in Hong Kong call 1Q15 the “darkest period” this year for China’s economy. GDP was 7% in Q1, the slowest since 2009, while industrial production in March rose at the slowest rate since November 2008, and inflation turned negative for the first time since 2009.

Hu now expects further easing with an interest-rate cut within a month (PBOC has already cut interest rates twice since November), increasing infrastructure spending and a relaxation of home-purchasing rules.

My connections in China and Hong Kong indicated that the new crackdown by Xi on corruption and state largess has put a fairly large portion of the nation’s businesses (in mainland and Hong Kong) once catering to the ‘elite’ rich class in China out of commission. This is one of the major contributing factors to the nation’s slowing growth.

WSJ estimated that the reduction in bank reserve-requirement-ratio could freed up more than $100 billion for China’s banks to lend. This suggests increasing liquidity compounding the social economic issue of wealth gap (which should be Beijing’s primary concern), similar to the 3 QE programs by the U.S. Fed.

This latest move seems a pretty desperate quick fix to the pessimistic market sentiment as it came just 2 days after China relaxed the short-selling rules leading to its stock-index futures crashed almost 7% when many retail brokerage accounts of Chinese mom-and-pops rushing for the exit (5.75 million new broker accounts were opened by retail investors in Shanghai and Shenzhen during the month of March). This is a firm indication of serious structural problems within China’s economic and financial system.

Economists think this decision could be a prelude to more easing measures to counter further slowdown in growth this year, which could only lead to a bigger bubble, and a more disastrous crash somewhere down the road.