Trinity Research is out with a new report alleging fraud at Vimicro International Corporation (NASDAQ:VIMC)

Trinity states that management has embezzled over $600 million from the company and what remains of the company is worthless for US shareholders.
Trinity goes on to state that management has falsified the company’s financials in order to inflate the share price while it has been dumping shares.
The obvious share dumping by management has been the subject of numerous other reports including from Bleeker Street Research and The Streetsweeper.
Trinity also states that the Chairman of ViMicro is now under investigation as part of a corruption scandal in China.

A PDF copy of this report can be downloaded here.

It is no secret that corruption runs rampant within the Chinese government, where many senior officials have historically used their positions of power to enrich themselves and their cronies at the expense of the Chinese populace. One of the hallmarks of PRC President Xi Jingping’s first two years in office is a solemn campaign to crack down on the highest levels of this corruption. Even senior government officials have not been immune to this crackdown, as evidenced by the recent investigation of Zhou Yongkang [1]. Many companies affiliated with corrupt government officials have lost much of their value as anti-graft investigations reveal the use of such companies as vehicles for embezzlement, bribery and financial fraud.

In this report, we unveil how insiders of Chinese video semiconductor and surveillance camera manufacturer Vimicro International Corporation (“VIMC”), led by co-founders Deng Shonghan and Jin Zhaowei (the “Co-Founders”), systematically gutted over $600 million worth of government funding, government-granted real estate assets, and proceeds from commercial government contracts from the Nasdaq-listed VIMC for personal gain. We believe much of this value was derived by bribing government officials such as recently sacked Shen Weichen, former Party Secretary of China’s Association for Science and Technology. Deng, VIMC’s Chairman, is among the numerous businessmen implicated in the bribery and general corruption charges that resulted in Shen’s sudden ousting.

The premeditation and callousness with which VIMC’s Co-Founders built a company to serve as a vehicle for their exclusive enrichment makes VIMC the worst case of what, to us, is clearly embezzlement (from both their company and the government) we have ever found.

We discuss our findings in the following sections:

Having declared the technology sector a key investment area for the growth of the Chinese economy, the government has invested hundreds of billions of dollars (trillions of RMB) over the past two decades to support domestic entrepreneurship, research and development in the sector. This government support, which is allocated through several regional and national government bodies managed by a select few, often takes the form of tax breaks and grants of funding, land for commercial use or commercial contracts with the government.

As is typical within the Chinese political system, when that much responsibility and capital is left at the hands of an unmonitored few, the results are predictably corrupt. As reported on October 31, 2013 by China Youth Daily [2] investigations by China’s Ministry of Science and Technology into the allocation of RMB 2.42 trillion from 2006 to 2012 revealed “shocking corruption” that has triggered a revamping of the way the government monitors its research spending. It turns out the vast majority of research funding ultimately went not to the intended projects, but to corrupt cronies and accomplices of the government officials issuing the grants. The article reviews cases of bribery, embezzlement, accounting fraud to cover up missing funds, secret expense accounts to fund everything from everyday expenses such as meals to cars, and more. 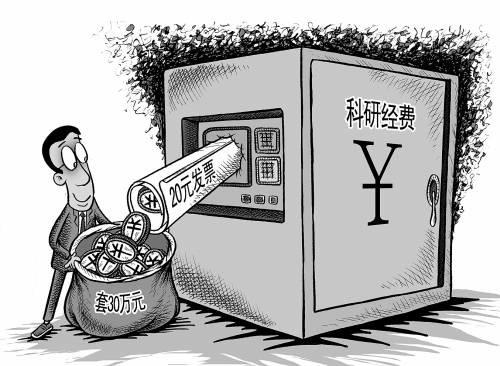 Shanxi, a Hotbed of Political Corruption

Shanxi, a province located in China’s Northern region, is the country’s most infamous area for political corruption. Shanxi was one of the areas targeted by President Xi’s anti-corruption crackdown, especially this year. As noted on Wikipedia:

Since Xi Jinping’s ascendancy to power at the 18th Party Congress, numerous highly ranked officials in Shanxi have been placed under investigation for corruption-related offenses, including four members of the province’s highest ruling council, the provincial Communist Party Standing Committee… They were all removed from office around August 2014… Shanxi was therefore the ‘hardest hit’ province during the anti-corruption campaign of 2013-2014. Targeted corruption investigations on such a massive scale was unprecedented; it amounted to a wholesale ‘cleansing’ of Shanxi’s political establishment.

And the news about Shanxi’s widespread corruption keeps flowing. Last week, China.org.cn reported about some of the very recent political cleansing in Shanxi[3] and this week, Caixin Online[4] reported the highest-profile case yet about corrupt tie-ups between government officials and companies that bribe them for all types of illicit political favors. This was not an isolated case, as Caixin reports: “a string of corrupt officials and former government employees have been uncovered recently.”

Several Chinese media outlets reported earlier this year that Shen Weichen, a long-standing senior official in Shanxi who held various government posts such as Mayor of Taiyuan City, Secretary of Taiyuan’s Municipal Party Committee, Secretary of Shanxi’s Provincial Party Committee, and Party Secretary and then Vice Chairman of China’s Association for Science and Technology, is one of the numerous officials who fell from grace this year. Throughout his long tenure as influential politico, Shen was apparently happy to do political favors for his cronies so long as he received considerable kickbacks from those who greased his palms.

One news article[5] dated 4/17/2014, concludes that more corrupt businessmen will be investigated and caught now that their government sponsor Shen has been sacked:

The article’s prediction has come true, and one of the businessmen affected is none other than VIMC Chairman and CEO Deng, who has been implicated with Shen’s corrupt practices now that his wife Tan Jing (a famous singer from Shanxi who was also Shen’s mistress while he was in power) is under investigation[6][7]:

(Translation: Early this year… a Shanxi singer (Tan Jing) got involved in the corruption case and was investigated by China’s Investigation Bureau….)

It is also noteworthy that Deng used to work with Shen as a senior officer at the state-run Association for Science and Technology that Shen used to oversee.

VIMC’s corporate history makes clear that the company was built in large part through government relationships from which funding, land rights, commercial contracts, and joint ventures were obtained. A careful read of VIMC’s past eight 20-F annual reports shows that the company has been a beneficiary of government generosity since 2007, a watershed year for VIMC. Eight years after its founding in 1999, for seemingly no valid reason, VIMC became a favorite of the government. Starting that year, VIMC received grants of land at ultra-low prices in Shenzhen, Shanghai, and Nanjing (Jiangsu province); received follow-on funding (outright grants or loans) to develop that land; collaborated in two joint ventures (JVs) with the local governments of Tianjin and (no surprise) Shanxi province; and received R&D-related funding in Qingdao and Wuxi. The details are shown below in Exhibit 1. 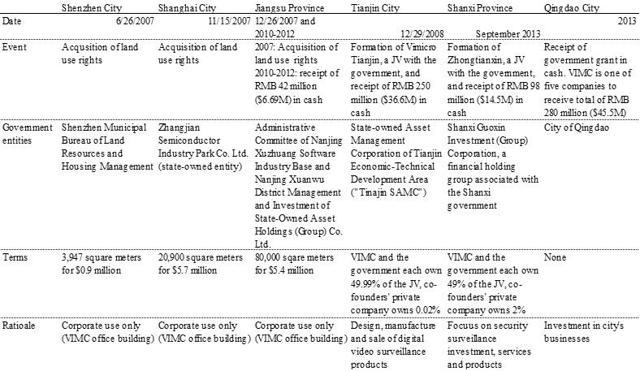 Although we looked beyond the SEC filings to find some of these dealings, we think it is most likely the company had more such dealings that we were unable to find throughout our research process. We found the cash grants from the city of Wuxi (in Jiangsu province) and the cash grants from the city of Qingdao[9] shown in Exhibit 1 not in SEC filings but from our own research of Chinese SAIC filings and local city governments’ public disclosures.

Interestingly, none of the government asset grants were disclosed in the types of highly promotional (and, as we show later, misleading) press releases that VIMC loves to issue whenever it signs a new contract with the government. This year alone, VIMC has announced 11 such stock-pumping press releases promising hundreds of millions of future orders from the government[10]. We note that several of these deals were done with the infamous Shanxi government in the city of Taiyuan, no less, where most of the cases of graft and government-baked corporate fraud have been discovered this year by the Chinese central government. These press releases would have you believe 2014 was quite a year for VIMC, in spite of the fact that both the CFO and the auditor were inexplicably replaced.

Instead of getting caught up in the pomp and circumstance of these announcements of government orders that never amount to much in audited financial performance, investors must take a closer look at the hidden value in the minimally disclosed government asset grants. We are happy to serve as your guide, since this hidden value is obfuscated by a complex organizational structure that makes it hard to track what is going on.

Exhibit 2 (below) shows an organizational chart that maps all the business entities either currently or previously owned and controlled by VIMC. We denote those that received government aid in yellow. 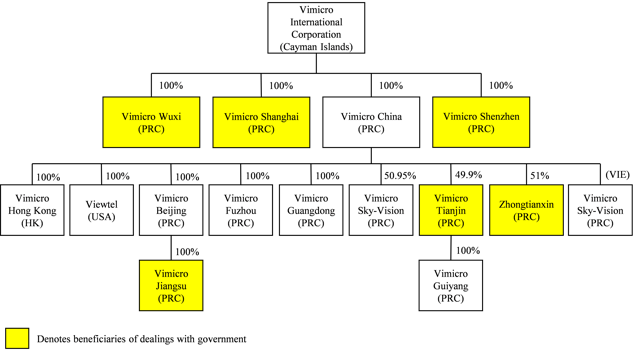 How and why VIMC, a nondescript hardware company with no real strategic value to China, managed to get so much from the government is not where we will focus, however. That investigation is better left to President Xi and his anti-graft campaign. As previously noted, having sacked the criminal Shen this year, the government is already on the case.

What the Co-Founders did after VIMC received the government grants is considerably more interesting and worth a closer look. Note that Exhibit 2 (above) is backwards-looking and therefore does not represent VIMC’s current organizational structure, which is shown in Exhibit 3 (below).

To state the obvious, Exhibits 2 and 3 are not the same…. Where did all the government aid go?? 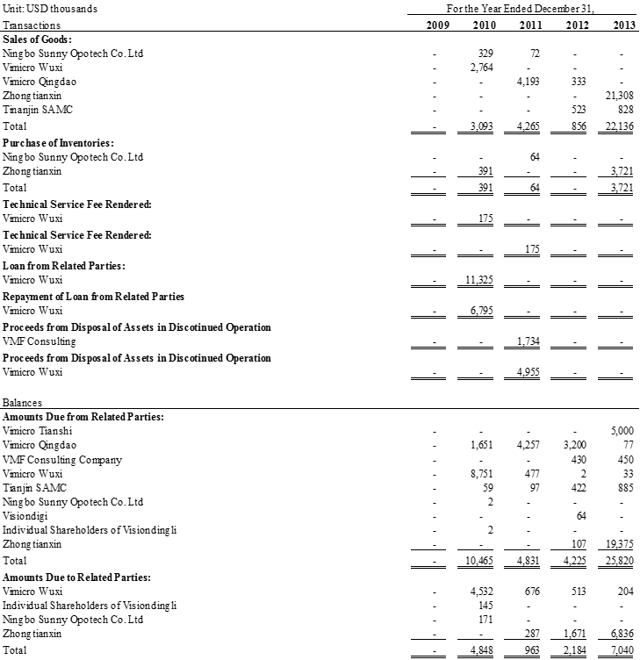