ValueWalk
Home Business Demographics: Do Not Write off US Economic Growth

Investment bank Credit Suisse Group AG (NYSE:CS) published a new report titled “A Demographic View: Do not write off US GDP growth” on August 08, 2014. In the report, CS analysts Amlan Roy, Angela Hsieh and Ric A. Deverell advance the thesis that the aging of the baby boomer generation and other “structural headwinds” are overblown, and that the U.S. economy is likely to continue to produce around 3% annual GDP growth through 2019.

The CS analysts summarize their view of future US economic growth in the overview of the report. “We use a demographic factor based supply-side growth framework over 1950-2013 to assess the debate and provide scenario based evidence suggesting that higher growth or similar growth averages to the 1970s-1990s are possible.”

The Credit Suisse Group AG (NYSE:CS) report highlights that most current mainstream economic organizations and economists are anticipating less than 3% annual GDP growth for the US over the next several years. For example, the International Monetary Fund is projecting an average GDP growth range of 2.7% from 2014-2019 whereas the Congressional Budget Office projects 2.5% p.a. GDP growth from 2014-2024.

Economist Robert Gordon also recently projected significantly slower US economic growth over the next 20 plus years. He only anticipates a mere 1.3% per year increase in labor productivity in the total economy, 0.9% for output per capita, and 0.4% for real income per capita of the bottom 99% of the income distribution because of the retirement of the baby boomers, widening income inequality and increasing government debt.

Roy et al argue US GDP growth rates will be stronger than many are expecting because baby boomers are going to work longer/spend more than is assumed and that technology will continue to increase worker productivity. The CS analysts point to their “very optimistic scenario”, which projects an average GDP growth of 3.2% per year from 2014-19, as well as their “moderately optimistic scenario”, which anticipates an annual average GDP growth rate of 2.9% over 2014-19, as “higher than what most official agencies project.” 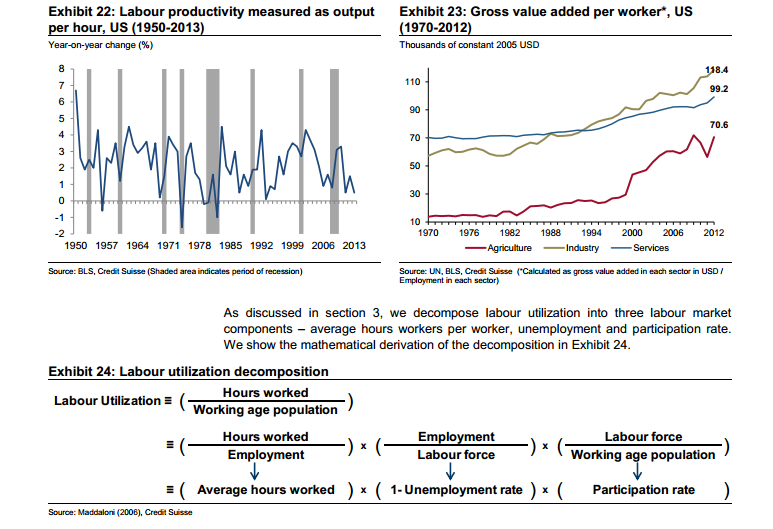