Texas is oil country. The state I now call home leads the nation in oil production and would be one of the top oil-producing nations if it were its own country. But that doesn’t stop us from exploring other promising oil opportunities further afield. Last week I traveled to Albania to check out a drill site of Petromanas Energy, a Calgary-based international oil and gas company focused on exploration and production throughout Europe and Australia. We own the junior stock in our Global Resources Fund (PSPFX) and Emerging Europe Fund (EUROX).

To many, Albania is an unknown country yet it has a rich and interesting history. It declared independence from the Ottoman Empire in 1912, was conquered by Italy in 1939 and occupied by Germany in 1943. Albania allied itself with the USSR until 1960 and then with China until 1978.  Democratic development has progressed since the country’s first multiparty elections in 1991. The 2009 general elections resulted in the country’s first coalition government and the 2013 election saw a peaceful transition of power. A parliamentary democracy, the country has steadily been welcoming foreign direct investment (FDI) since it shifted away from communism in the early 90s. The recent FDI into the country comes on the back of the extensive development of its rich petroleum resources.

This was my third trip to Albania. I last visited the country in 2004 when we were seed investors in another oil play there, Bankers Petroleum. Today Bankers’ Albanian discovery is the largest onshore oilfield in all of Europe. The company is now close to 40 percent of Albania’s FDI and is reinvesting all cash flow back into the country, about $300 million per year. Bankers has done an amazing job cleaning up the environmental disaster left behind by previous operators of the assets which Bankers is developing. Today the fields are green and sheep roam freely. Old and dirty early rigs have been replaced with new safer, cleaner technology.
So much has changed since my last visit.  The country is more prosperous and more verdant. Capital city Tirana’s infrastructure and roads have improved by a quantum leap in the past 10 years. Every morning I ran in Rinia Park, the large central public park, with Marin Katusa of Casey Research. We were impressed with the hundreds of locals jogging at 7 a.m.

Meeting A Man of Many Colors

On this visit I was honored to meet the Prime Minister of the country since 2013, Edi Rama, who also served as the mayor of Tirana from 2000 to 2011. He is a fascinating leader. Rama is a native of Tirana and, in addition to becoming involved with the first democratic movements in Albania, he is an artist and a former basketball player for the Albanian national team. He is, to a large degree, responsible for the vibrancy I saw in Tirana, his Clean and Green project resulting in nearly 100,000 square meters of green land and parks, and his creative efforts to use art and color helping to curb corruption and revive civic pride and responsibility. You’d enjoy watching him explain this dramatic transformation in his TED talk Take Back Your City with Paint. Rama has helped form a stable political environment in Albania, just one reason Petromanas Energy has invested in drill sites here.

Fertile Ground for Oil and Gas

The company’s assets in Albania cover more than 1.1 million gross acres.  In the company’s presentation during our visit, management explained why Albania’s landscape is also key. Petromanas is exploring for large, deep, fractured carbonate structures of Eocene-Cretaceous age, similar to those in southern Italy which are the sites of several prolific oil fields.

Located across the country’s Berati thrust belt, you can see the multiple wells in the map below: Papri, Shirag and Molisht. Petromanas is looking for a light oil deposit in these wells. Super major Royal Dutch Shell has invested $200 million to partner in these plays.

While at Petromanas properties, our group saw a few of these wells, but most notable was the visit to the Molisht-1 well that is currently being drilled. As Keith Schaefer points out in his recent Oil and Gas Investments Bulletin on the Albania trip, the Molisht-1 well has the potential to be an 8,000-10,000 barrels of oil production per day well, an absolute company maker. And according to Petromanas’ presentation, the Molisht-1 well could potentially hit earlier than expected, which would be a positive surprise for the company.

What do the founder of Lionsgate Entertainment and a former NATO Commander have in common?

Petromanas Energy is an example of a company that is currently in a strong area of the market and exhibits robust fundamentals. Its management, research and location are only a few reasons I see great potential for this organization. Escorting us on the research trip were two of the company’s directors, my good friend the legendary Canadian venture capitalist and philanthropist extraordinaire Frank Giustra, and General Wesley Clark, who as the former Supreme Allied Commander Europe, led the charge to stop Serbian forces from committing genocide in Kosovo. I’ve also had the privilege of working alongside these distinguished gentlemen with the International Crisis Group, a non-profit, non-governmental organization committed to preventing and resolving deadly conflict around the world.

The Path from War to Peace and Prosperity in 20 Years

Albanians and their Balkan neighbors have seen more than their share of conflict. The trigger for World War I was the assassination in Sarajevo of Archduke Ferdinand, heir to the throne of Austria-Hungary, by a Yugoslav nationalist in 1914. The Yugoslav Wars fought from 1991 to 1999 on the territory of former Yugoslavia have been described as Europe’s deadliest conflict since World War II and the first since the Great War to be formally judged genocidal. It is estimated at least 130,000 lost their lives.  In the last of these ethnic conflicts, the Kosovo War, a million ethnic Albanians fled or were forcefully driven from Kosovo by Yugoslav troops. Under the command of General Clark, NATO forces bombed Serbian forces to prevent the continued displacement and persecution of the Albanian people.

Prime Minister Rama told us that he is profoundly grateful to the American people, President Clinton, and NATO for saving the lives of at least 900,000 Albanians and ushering in stability and positioning the region for progress. It was a case study in the successful use of force to bring peace to a region and a consequent drive for prosperity for its people. Our collective investment in this humanitarian success story is paying dividends for a new generation of Albanians. The country’s transition to a free market economy has been difficult and there are many economic challenges on the road ahead but the government believes in creating a path favorable for business. Companies such as Bankers Petroleum and Petromanas are helping Albania to develop its natural resources, improve its economy and create growth opportunities for investors who see the potential of this resilient country. 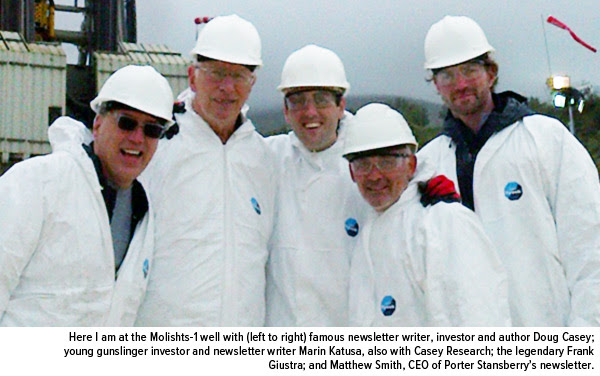 The S&P 500 Index rose this week on good earnings results, merger and acquisition (M&A) activity and better economic data. The market remains resilient with the S&P 500 less than one percent away from recent highs, and earnings reports have generally been well received.

Treasury bond yields declined again this week, pushing the benchmark 10-year yield to established support levels near 2.60 percent. Economic data was mixed but on balance, there were more positives than negatives. Geopolitical events appear to be a driver as unrest between Russia and Ukraine intensifies and investors prefer the safety of U.S. Treasuries. The Fed met expectations this week with another round of tapering of quantitative easing (QE) and no surprises in the official press release.