ValueWalk
Home Business Why Should You Invest in Emerging Markets?

Why Should You Invest in Emerging Markets? by Gregg S. Fisher, CFA 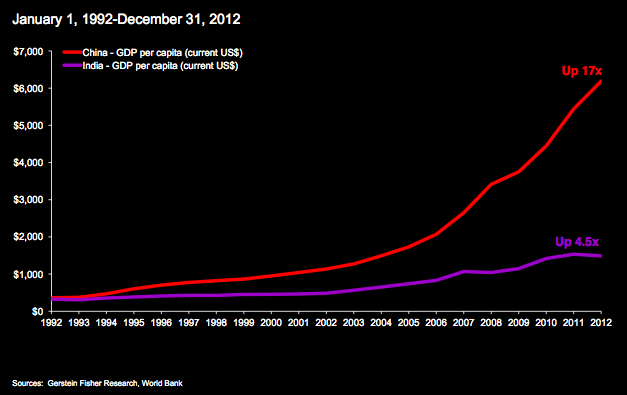 Now, think about what this might mean for the public markets if, all of a sudden, people in these countries have more money to spend. What would it look like if they went from living on $2 a day to living on $4 a day? It might be hard for you to imagine living on $2 a day or $4 a day; it probably cost you at least $2 just to get to work today.

I remember that it was very hard to get people to think about investing in international markets in the early 1990s. It became much easier as these markets started to do well. By 2006–2007, most investors wanted to buy two things: a condo in Miami and emerging markets. There was nothing else that anybody wanted to be in.

Right around that time, we started seeing covers of Time magazine with such headlines as “China: Dawn of a New Dynasty” or “India Inc.” We all thought emerging markets were going to be the “next new thing” that would take over everything we knew. But in fact, if you invested right around the time of those covers, emerging markets were down roughly 60% from their earlier growth levels. 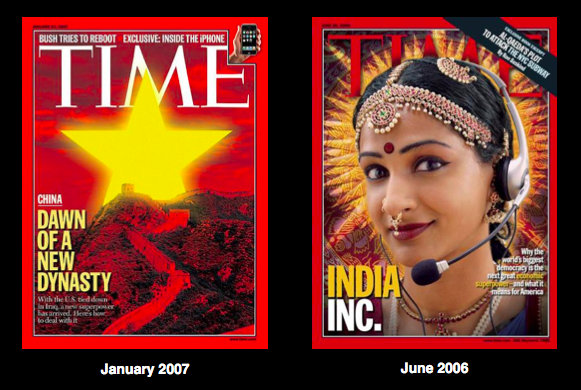 But it didn’t stay that way. In the last year or two, I have found that people are a little reluctant to invest in international markets again, given that non-US markets have done much worse than the US market in the last couple of years.

The Value of Added Diversification

Imagine that you go back 20 years. You have a dollar to invest and you don’t know in advance what will do better: emerging markets or the US stock market.

If you put 50% in the US market and 50% in emerging markets and rebalance every couple of months, you will earn closer to 9%.

I would imagine that most investors in the United States wouldn’t put 50% of their portfolio in emerging markets. Emerging markets are riskier than the US market. We don’t want to overcomplicate this scenario with the exact percentage you should have. But the point is that when you diversify, you can earn a better return than you can by investing in only one of these things.

In this case, you end up with a return of about 8.26%, compared with the US-only portfolio return of 8.21%. Because they’re so close, we’ll call 8.21 and 8.26 the same. The question to ask yourself is, If I knew 20 years in advance that I could have a portfolio with 50 countries and 55,000 companies and I’d end up with the same rate of return as a portfolio with only one country and 500 companies, which would I choose?

Most investors would choose the diversified approach. This is an example of a way to reduce your risk but end up with a similar rate of return through global diversification. These are probably things we all know intuitively, but it’s good to be reminded and look at them again.

When investing in emerging markets looked great and rosy — remember the “India Inc.” cover story — the price for that greatness was generally reflected. The perception of those economies was that they were safe, there was not a lot of risk, they were going to continue to grow, and we all wanted to be a part of that growth.

Market prices went up after that story, but as the global financial crisis kicked in, we saw them come down by 60%.

Here we are today, and suddenly, the sun is shining on China and India, other emerging markets, and all the risks that investing in those markets can present.

Those risks were there before. It’s just that now we are more aware of them. We’re focused on them. In October 2011, the cover of Time magazine featured “The China Bubble”: “We’re counting on China’s growth to save the world. Unless its economy blows up first.” 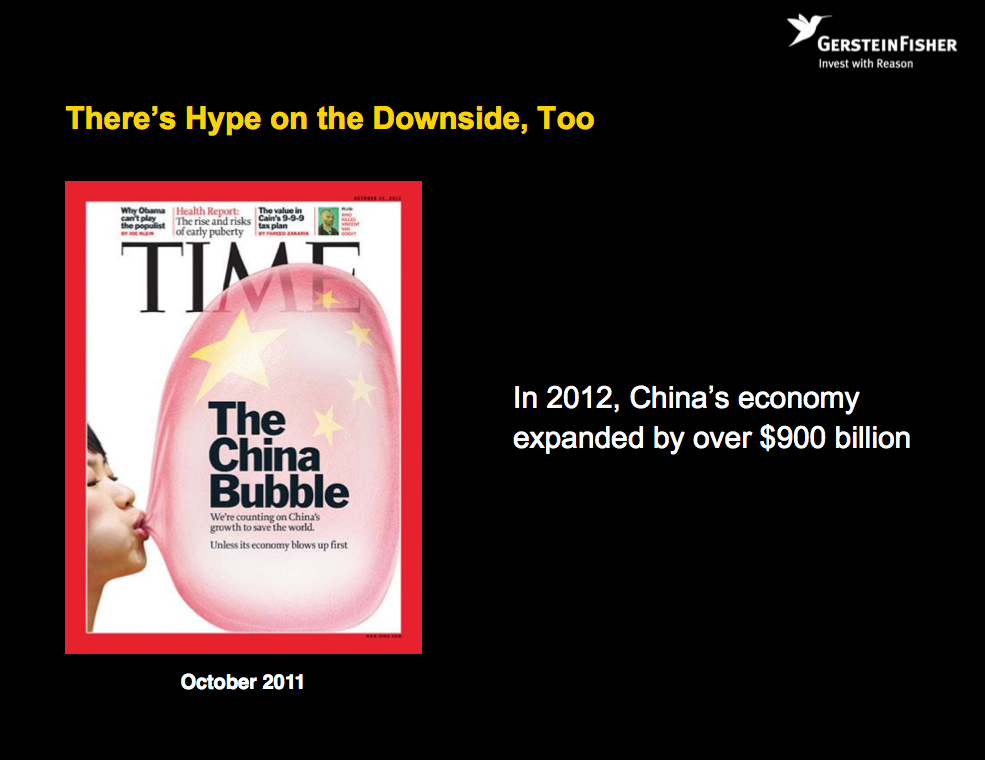 Right after the article, even though it was negative about China and India, China’s economy still expanded by more than $900 billion.

Risk Is Getting Priced in, and Rewards Could Be Attractive

It’s popular and attention grabbing to argue that things are cheap or undervalued. I don’t like using such words as “undervalued” because they imply that the market got the price wrong.

Low prices simply mean that there’s risk in the emerging economies, the risk is getting priced, and the market price is low. In other words, we all know there’s risk out there, and the prices have come down because of that risk. If risk and return are related, it’s possible that the risk could be rewarded.

You’d be smart to ask, “What does that look like compared with the United States?” The US GDP is about $16 trillion. 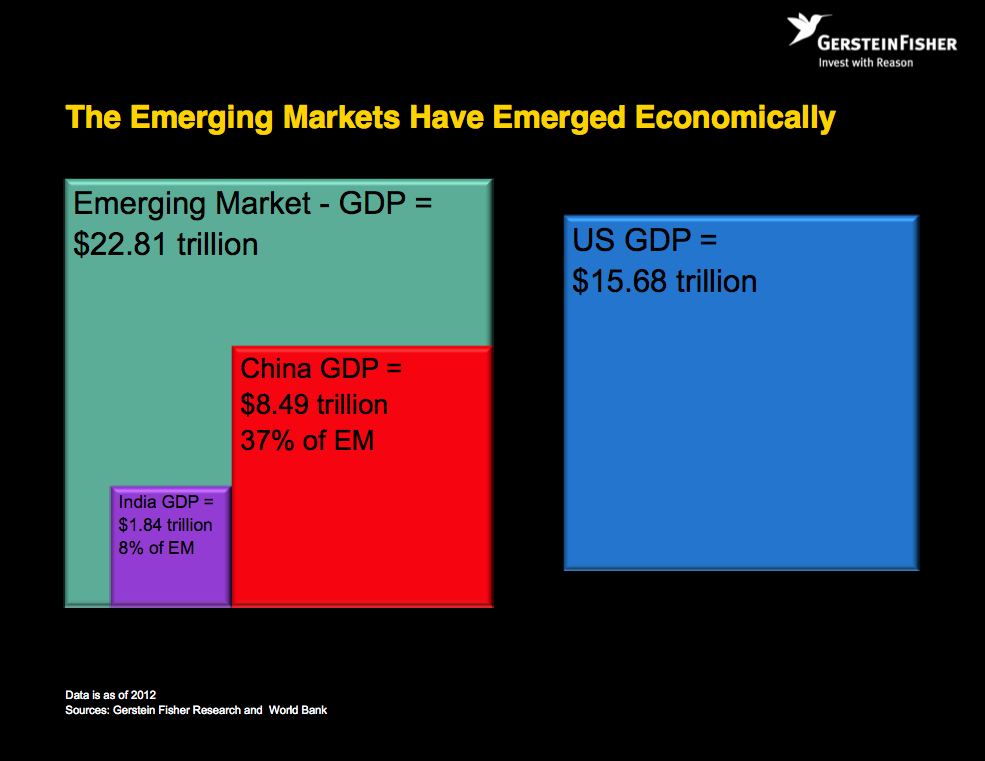 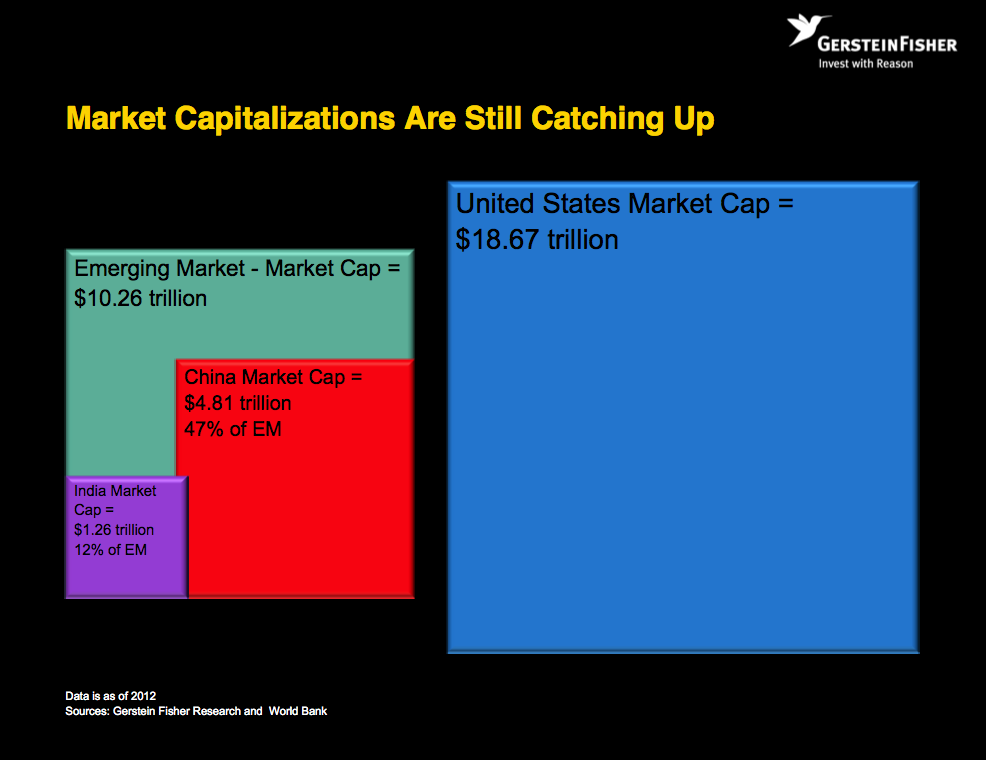 Fundamentally, what is the price of a stock? It is the collective opinion of lots of people all over the world, doing all kinds of analysis, thinking about what things should be worth, and eventually giving the stock a price.

Now, we have to determine earnings. We can pull earnings from companies’ financial statements, but where do we get those numbers for countries? In my mind, GDP is about as close to earnings as we’ll get. We can think of market cap to GDP as the price-to-earnings ratio. Then, we can apply this approach to these countries.

What you see when you do that is that the market is pricing US earnings at a significantly greater multiple than the earnings in India and China.

Why do you think that would be? Why would rational people put a lower price on the earnings, revenues, or production in India and China than on the same things in the United States?

Investors around the world are bright people. They say, “It’s riskier over there; therefore, drop the price so that I am sufficiently rewarded for taking on that risk. The way I get rewarded for taking on risk is through my expected return. The lower the price that I pay for a security or a country, the higher my expected return. The markets do a pretty good job, on average, pricing this risk.”

There are some issues with using market cap to GDP in financial analysis. It’s not meant to be a complete assessment of each country, just an illustration. Remember that it takes a while to adjust GDP because it comes from government agencies, and so the release of GDP data can be delayed weeks or months.

If the fundamentals in China, India, and other emerging economies are not tremendously different today from what they were in 2006 and 2007 and if the story remains relatively the same but the market price is significantly lower, what process are investors using to determine that they liked the emerging markets in 2006 and 2007 and they don’t like them now?

Is it just because the price went down? Is it because the US market did a lot better than emerging markets? There’s something going on as to why all these investors are taking their money out of emerging-market stocks and buying US stocks. Is it a mathematical exercise, such as