Through its subsidiary companies, NVGS owns ships used to transport liquefied petroleum and petrochemical gas. Last quarter, Ross initiated a 23.2-million-share position in the firm, which now composes 41.77% of his portfolio. Thomas Steyer also has a position in the company.

Wilbur Ross did not increase any of his positions during Q4.

BankUnited (NYSE:BKU) remains one of Wilbur Ross’ biggest holdings, even though he sold off 2.5 million shares, reducing his position by -32%. The transactions took place at prices between $30.65 and $33.22. Ross first purchased BKU in March 2011 and started selling off his shares in 2013.

During Q4, Ross cashed out of Callidus Software Inc. (NASDAQ:CALD). The billionaire sold off all of his 1.1 million assets at prices between $8.60 and $13.35. 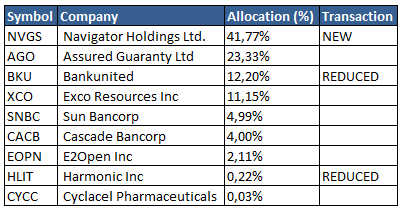