The Kids Are Alright by Matt Busigin

The Baby Boomers were the most populous and richest generation to walk the earth. Now, they are just the richest. The Millennial Generation, or Generation Y, are the largest generation in human history. Their story thus far bears a strong resemblance to the experiences of their parents. The peak of the Baby Boom happened in 1957. For their children, the Millennials, it came 36 years later in 1993 (Figure 1). 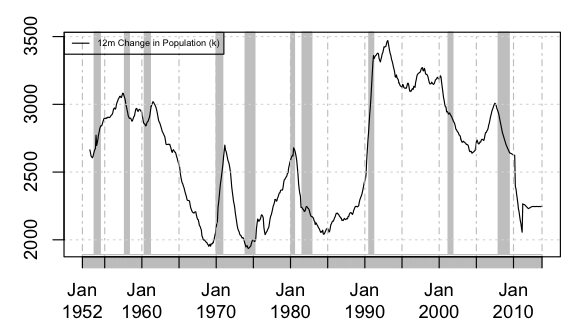 In both cases, the peak population for young adults (defined here as 16 to 24 years old) happens two decades later. For Baby Boomers, this happened in 1980. Some 36 years later, for their children, it is happening now. To chart the voyage of Millennials in 2014 and beyond, we can observe what their parents did from 1980 on. 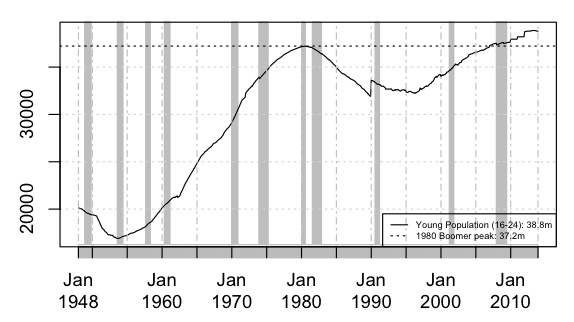 Both generations came of age during the worst recessions since the Great Depression. By the time the Vietnam War ended in 1975, the Baby Boomers of their peak birth year (1957) were 18 years old.

When the United States withdrew the bulk of their forces for the Iraq war, Millennials from their peak birth year (1993) were also 18 years old. There are comparable elements between the common perception of Millennials and the views of the older generations about the Baby Boomer counter-culture. Finally, the perception of our institutions is likewise weakened: according to Gallup, confidence in federal government to solve domestic problems declined from 76% to 56% just between 1972 and 1976 before rebounding to the peak of 83% in 2001. Once again, confidence has declined — now down to just 42%.

It could be said that the Millennial Generation is coming of age in much the same way as their parents did: in a depressed economy and demoralized society. Despite this, the Boomer generation still retires the richest in history — in money, real capital, and living standards. The institutions that the public had lost faith in, but were nonetheless preserved, delivered a better future.

The term Lost Generation was created to describe the generation which came of age during WWI, and its use peaked in 1946. Google Ngram data ends in 2008, just in time for the term to be revived for the Millennials. 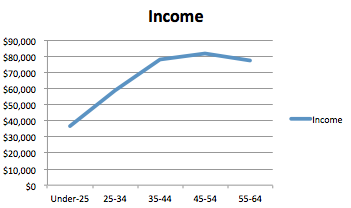 The pessimism around the Millennial generation is, at best, premature. We already know that income scales with education, and the Millennial Generation will be the most educated in history. The oldest of the Millennials, 30–34s, have a much higher post-secondary attainment rate than than their parents: 45% to the 40% of 50–54s. Beyond education, income also scales with age. With the modal Millennial being 21 today, over the next decade millennials will likely make their largest age-based income gains (more than $22,000). With this higher income, 25–34?s spend a great deal more, and more frequently form households.

All of these new households need a home

The Census Bureau forecasts an additional 30 million Americans in 10 years. This is in addition to the 22 million 20–24s who largely haven’t formed households, who will become 30–34s who have. Even using the densest household age bracket, 35–44s at 3.3, that is 16.25 million new households, or 1.625 million per year (Figure 4). This is largely consistent with other estimates, such as from the Federal Reserve’s Andrew Paciorek. 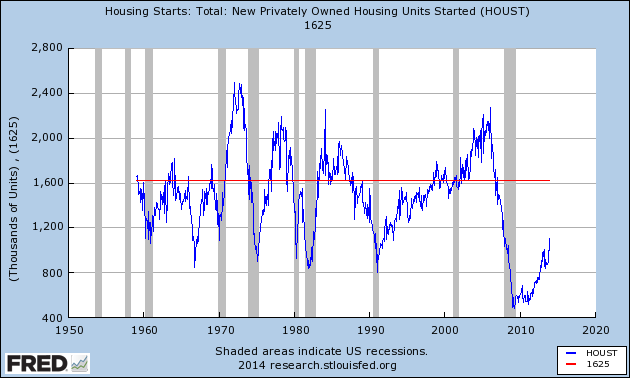 The Cleveland Fed’s Timothy Dunne further estimates that there is a shortfall of 2.6 million households (occupied homes). Both papers outright disclaim any correlation to homebuilding, or the kind of homebuilding because the cyclicality of homebuilding and inventory is external to their models.

Using vacancy data from the census to tell the supply or inventory story, we find surprisingly similar conclusions. 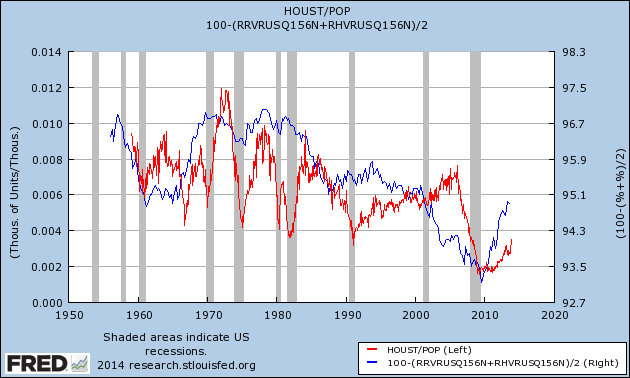 Figure 5: Starts Per Pop vs. Average of Homeowner/Renter Occupancy Rate

The number of housing starts Per population strongly relates to the average of renter/homeowner occupancy. Moreover, average occupancy statistically leads starts, with a peak correlation at 20 months of 62.5%. This means the present occupancy rates explain nearly two-thirds of housing construction 20 months out.

leaves us with a present estimate of 1.7 million starts in two years, 70% higher than the present rate.

The residuals, though the minority, are still large, and demonstrate that there are many frictions between demographics and construction.

Newly formed households infrequently occupy newly constructed housing. Even in total, under-35 homeownership has remained comfortably below majority, even at the height of the housing boom. Any view that credit availability to younger households will be a serious deterrent is inconsiderate to the homeownership structure of young people. In reality, newly constructed homes are occupied by established households. They move up, sell or rent their previous dwelling to less established households, who then sell or rent to newly formed households.

It’s easy to see how this process could lead to the frictions we’ve witnessed. Cyclicality in upper-end incomes and credit availability becomes the tail that can wag the dog, but the structural demand limitations ultimately win, as we saw in the premature or over building in the mid aughts.

The unemployment rate for boomers around 1980 spiked to nearly the same magnitude as for their children three decades later (Figure 6). Private Residential Fixed Investment coincidentally collapsed  from 6% of GDP to 3% for the boomers, and from 5.2% to 2.4% for their children. One benefit the Millennials will have over the boomers is that the workforce will actually be getting younger at the same time that the population will be getting older. This will mean roughly the same number of peak-aged workers to serve the demand of an extra generation. 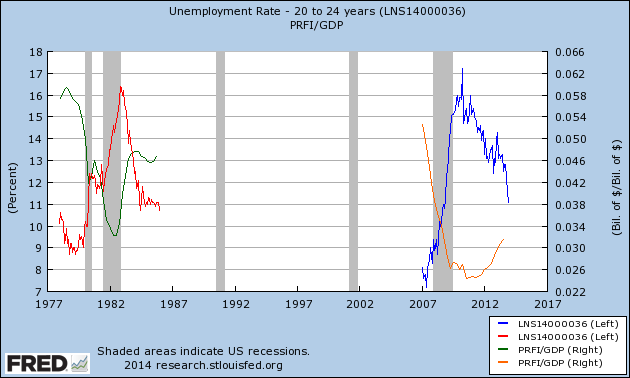 The “youngening” of the labour force between 1960 and 1980 sharply reversed in 1980 as the largest generation began to dominate labour demographics (Figure 7). Once again, the largest generation will dominate the labour market, except this time it will be the Millennials. The quantity of Millennials who can join the work force is slightly larger than the size of their parents retiring from it. 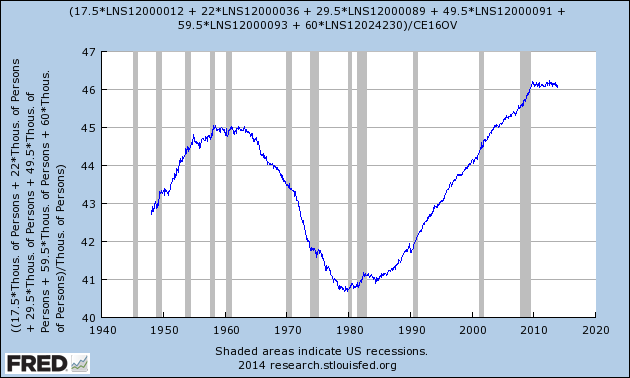 There are 300,000 baby boomers hitting 65 every month for the next 19 years. This has already distorted the anchoring for what a “healthy” Non-farm Payroll growth looks like. 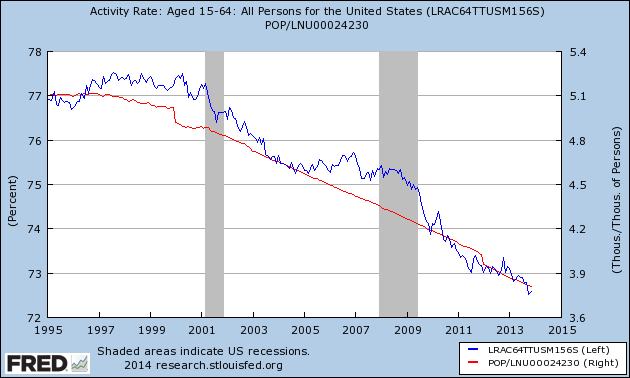 The decline of the activity rate is very much in line with the ratio of population to seniors. Usage of the activity or participation rate as a proxy for unemployment is consequently flawed. 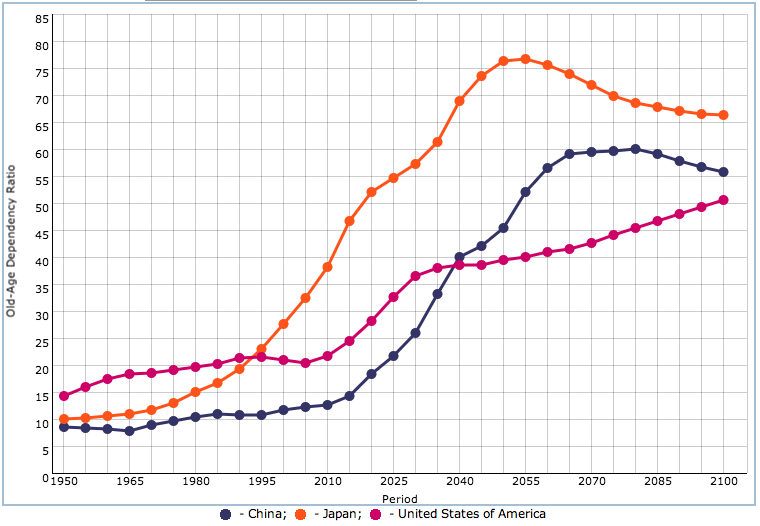 Figure 9: Dependency ratio (past and projected) for the United States

This is where we reach the crest of the future opportunities of Millennials. The UN predicts that the dependency ratio (the ratio between peak-aged workers and those too young or old to work) is will rise more than 10 points to 32 in the next decade alone, and continuing with a shallower slope for decades after.

Our two great problems are our solutions

If you poll some, the great twin threats to American labour are foreign debt and robots. The soaring dependency ratio in both the United States and abroad alters the calculus here: for future output to simply stay flat, productivity must increase at a faster pace than the dependency ratio rises.

Our two top foreign Treasury debt holders, Japan and China, will be be experiencing an even more rapid and elongated rise in dependency ratio. The years of being able to export the surplus of working-aged labour are closing in those countries, while the United States has some of the most favourable working-aged demographics in the industrialized world. In this way, the Baby Boomers left their children an annuity of a sort — they paid foreigners money for decades that their children will exchange for labour.

Invoking The Who, to the people talkin’ about my generation: The kids are alright.

Don’t miss an insight from our global community of authors. Subscribe to Inside Investing here.