Hottest links for Wednesday November 6th, 2013 the very early edition (see Tuesday’s edition of hottest links). Get our free daily newsletter (which HAS BEEN RECENTLY UPDATED) and never miss a single linkfest.

Top stories for today are included below. Brooklyn Investor has a great post about what to do in this market, which is filled with lots of valuable information; It has become the in thing to seed former analysts who start their own hedge funds, but what is their track record?; Really good value write up on a small cap, PD-Rx Pharmaceutical; Guess which famous actress (or whatever she does) has been declared a bio hazard in Australia?

What To Do In This Market

Warren Buffett says that International Business Machines Corp. (NYSE:IBM) is buying back a lot of stock so a low stock price is actually good for him as IBM can buy back more stock.  This is something that people have a hard time understanding.  If he owns a bunch of Berkshire Hathaway Inc. (NYSE:BRK.A) (NYSE:BRK.B) stock, how could he be happy to see the stock market go down?  [KK, The Brooklyn Investor]

Ferguson is described as a “protégé of Pershing Square Capital Management’s William Ackman,” for whom he served as an analyst. [Tom Brakke, Research Puzzle Pieces]

PD-Rx Pharmaceutical (OTCMKTS:PDRX) has ~75% of it’s market cap in cash and when the P/E ratio is 7.5x you get an even lower number when you switch to a metric that does account for the cash on the balance sheet. [David, Alpha Vulture] 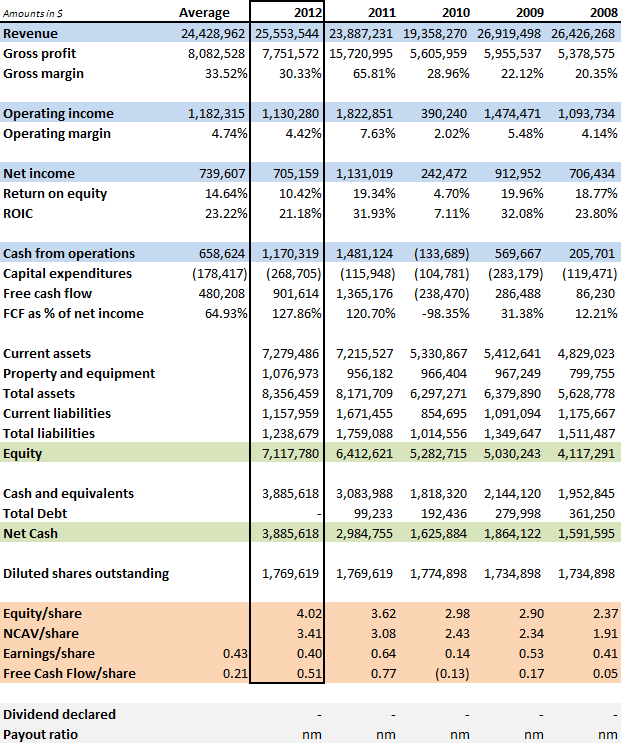 Buffett highlights the inextricable tie between GDP growth and corporate profits. GDP growth is the limiting factor (interest rates and margins are the other factors). [Wesley R. Gray, Turnkey Analyst]

Investment professionals and seasoned investors prize numbers that include repetitive patterns. With these abstractions of reality we can build nice neat statistical formulas that give us a good chance to be correct most of the time. [A. Michael Lipper, CFA Institute]

Beginning in the 1980s PepsiCo, Inc. (NYSE:PEP) started running the Pepsi Challenge — television commercials featuring taste tests that would pit their soda versus The Coca-Cola Company (NYSE:KO). Tasters would take sips of each unmarked beverage, and were asked to declare which soda they preferred. [Mebane Faber]

Hedge Fund Investment Conferences in 2013: Links to All Our Notes

How To Discount Backtests Due To Data Mining

When evaluating a trading strategy, it is routine to discount the Sharpe ratio from a historical backtest. The reason is simple: there is inevitable data mining by both the researcher and by other researchers in the past. [Yan Liu, SSRN via @quantivity]

Do You Want A PhD Managing Your Money?

Apollo Tyres Ltd (BOM:500877) knew what it was getting into when it agreed in June to buy Cooper Tire & Rubber Co (NYSE:CTB), Cooper’s chief executive said Tuesday, lobbing the opening volley in Cooper’s lawsuit seeking to force Apollo to close its $2.2 billion deal to buy Cooper Tire. [Liz Hoffman, MoneyBeat]

Nigerian lender Diamond Bank has suspended the launch of its seven-year $550 million bond? It appears it’s the Fed’s fault! as the bond’s marketers noted “pricing turbulence in the international debt market,” in a presentation seen by Reuters on Tuesday. [Tyler Durden, Zero Hedge]

Banks offering mortgages with only 5% down payments

After the housing bubble burst, buyers needed to come to the table with as much as 20% down or they had to turn to the Federal Housing Administration for a low down-payment loan. But now banks like TD Bank, Bank of America Corp (NYSE:BAC), and Wells Fargo & Co (NYSE:WFC) are loosening the purse strings, offering loans with down payments that are as low as 5%. [Les Christie, CNNMoney]

Regulators around the world are investigating whether more than a dozen firms, including Deutsche Bank AG (NYSE:DB) (ETR:DBK), colluded to rig benchmark interest rates. Barclays PLC (NYSE:BCS) (LON:BARC), UBS AG (NYSE:UBS) and Royal Bank of Scotland Group plc (NYSE:RBS) (LON:RBS) (AMS:RBS) are among companies that have been fined about $3.7 billion for rigging the London interbank offered rate, or Libor, the benchmark for more than $300 trillion of securities worldwide. [Karin Matussek and Nicholas Comfort, Bloomberg]

As Twitter gets set for one of the hottest initial public offerings of the year, the U.S. House of Representatives ethics committee has a reminder for lawmakers and their staff: You can’t join. [Benjamin Pimentel, The Tell]

Bio-security officers in Australia have been ordered to inspect any copies of Katy Perry’s new album arriving into the country from overseas. [BBC News]