Hottest links for Wednesday October 30th, 2013 the late edition (see Tuesday’s edition of hottest links). Get our free daily newsletter (which is being updated currently to make it even better) and never miss a single linkfest.

Top stories for today can be found below. A great new profile on Dan Loeb and Bob Chapman (always looking for publicity) even attacks his “friend” in the story. Did one of the most famous hedge fund managers kill a Cuban boy in 2002? You answer; Lots of great value write ups, behavioral finance articles as well today; And dont miss not the Onion, guess which washed up former famous actors fought over a dinosaur skull which might have been stolen?

FRMO Corp. (OTCMKTS:FRMO) is a strange entity, but basically it owns a stake in Horizon Kinetics (asset manager), has cash and investment assets, revenue sharing stream and things like that.  More on that later. [KK, The Brooklyn Investor] 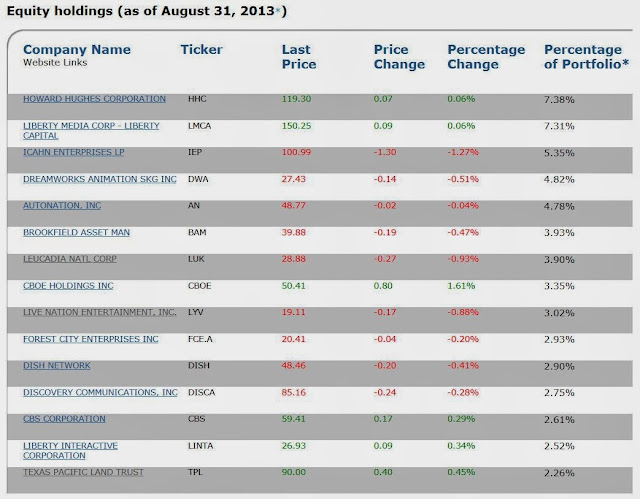 Various investors’ behaviors such as herding, performance chasing, and complex committee structures could cause poor manager selection and underperformance, according to attendees at the Opalesque Nordic Roundtable. [Sage Um, aiCIO]

Over the years, I’ve found that simply asking why and listening to the quality of the response is the best bullshit filter. If answers come back in cliches and generalizations, that’s an indication that more thinking is needed.[Shane Parrish, Farnam Street]

As the readers of my posts already know, I learned critical elements of security analysis and portfolio management by handicapping thoroughbred horses at the New York racetracks.  [A. Michael Lipper, CFA Institute]

Frenzy of Deals, Once Expected, Seems to Fizzle

How Many Stocks Should You Own?

In the fifth chapter of The Intelligent Investor, titled “The Defensive Investor and Common Stocks”, Graham lays down the foundation for picking stocks under a section titled – Rules for the Common Stock Component. [The Safal Niveshak Post]

Quantitative investing has developed an unjustified PR problem based on the unfortunate tendency of many to associate all quantitative approaches with “Black Box” investing. [David Foulke, Turnkey Analyst]

Paul Singer’s Elliott Management happens to be one of the few big hedge funds that’s seeing attractive opportunities and is beefing up its capital to stay ready. In the latest quarterly letter, which was obtained by ValueWalk. [Tabinda Hussain, Value Walk]

The Best Little Hedge Fund You Never Heard Of

Fixed Income Arbitrage is most famous for going bankrupt. There is no shortage of examples, starting with Long-Term Capital Management in 1998-1999. The strategy is full of concepts that investors love to hate, such as leverage and adding to trades that lose money. [Climateer Investing]

The hedge fund industry as a whole is experiencing dynamic change—moving from what some would say was a secretive industry, to a widely-recognized and influential group of investment managers. [Mary Jo White Law.Harward.edu]

You may be dimly aware of Institutional Shareholder Services. That’s the proxy advisory firm upon whom many mutual-fund managers rely when exercising their voting powers as corporate shareholders. [Brendan Conway, Focus on Funds]

Spanish sovereign bond spreads have collapsed this week to their lowest (least risky) in 30 months at a mere 229bps. [Tyler Durden, Zero Hedge]

Richard Thaler, “If you want to get somebody to do something, make it easy.” via Abnormal Returns. [Timothy Taylor, Conversable Economist]

While that’s a touch too Candide-like for my tastes, I cannot deny that cconomic growth has been positive while inflation has been subdued, and the Fed is not tapering anytime soon. [Barry Ritholtz, The Big Picture] Do investors have too much information?

The investor William A. Ackman said on Tuesday that he believed activist investing by shareholders would be an increasing trend in Europe in the coming years. Mr. Ackman touched on a variety of topics on Tuesday, including his unsuccessful bid to change the culture at J.C. Penney Company, Inc. (NYSE:JCP) by bringing in a new chief executive and his public spat with the investor Carl C. Icahn about Herbalife Ltd. (NYSE:HLF). [Chad Bray, DealBook]

JPMorgan Sees ‘Most Extreme Excess’ Of Global Liquidity Ever

Once again, in October, Dan Loeb was lobbing grenades. This time his target was Sothebys (NYSE:BID), the international auction house, founded in 1744, that, along with chief rival Christie’s, owns the high-end business of reselling the art, real estate, jewelry, furniture, and other knickknacks of the wealthy. [William D. Cohan, Vanity Fair]

It does not take long to find out where we are within the current investment cycle as one of three things will happen; 1) no one wants to talk about their investments; 2) a comment about investing might arise, or 3) they tell you everything about their latest investment success. The chart below explains the concept. [Lance Roberts, Pragmatic Capitalism] The Thermometer of the Stock Market

have also been participants in the US stock market since 1980 and are very aware of big swings in enthusiasm for owning common stocks. So we thought it would be helpful to share our opinion on the current temperature of the market. [Smead Capital Management]

Nicolas Cage paid more than $270,000 for the 67-million-year-old skull of a Tyrannosaurus bataar (a close relative of the T-Rex), which at the time was the largest dinosaur skull to ever be auctioned. At the time, Cage outbid fellow actor and auction enthusiast Leonardo DiCaprio for what The Telegraph immortally described as “a ferocious-looking addition to his fossil collection.” [Julie Miller, Vanity Fair]