Hottest links for Saturday and Sunday October 26th-27th, 2013 the weekend edition on time (see Friday’s edition of hottest links). Get our free daily newsletter (which is being updated currently to make it even better) and never miss a single linkfest.

Top stories for today can be found below. There are a lot of great value investing/behavioral articles out, including some great valuation pieces; Check out some good articles on hedge funds, including an article about a new massive purchase by Howard Marks’ Oaktree Capital; Some notes from a recent investment conference, stay tuned as we are covering four different investment conferences this week; The debate over small caps, Royce Funds explains why there could still be some room for growth in the sector; How much is a Warren Buffett tweet worth? What about one from Carl Icahn? Not even close to one from Justin Bieber; A Man’s house went on fire but he ran back in to heroically save….

OK, so this is another extension of the footnote to the book post.  Someone mentioned in the comment section that Colfax Corp (NYSE:CFX) is the younger analog to Danaher Corporation (NYSE:DHR) and it is owned by some Tiger cubs and BDT Capital, a firm run by Byron Trott. (Buffett’s investment banker). [KK, The Brooklyn Investor]

Wise words from great investors… “I will tell you how to become rich. Close the doors. Be fearful when others are greedy. Be greedy when others are fearful.” – Warren Buffett. [Kanwal Sarai, Simply Investing]

My early days of investing involved some speculative purchases of Priceline and Kmart.  The first one turned out great and inspired a passion for investing. Here’s a look at why that’s important, and some other key tips I’ve mastered over the years. [Benjamin Clark, ModernGraham]

My Investing Mistakes And Lessons That I’ve Learned

This is a list of the most important things that I’ve discovered.  Sometimes I have learned these things the hard way. [Glenn Chan]

While I don’t think the US is in a bubble it is in the top 10% of valuations, which works as a massive headwind to returns in the 3-10 year period. [Mebane Faber]

What to Do with Small Caps?

First is a chart on the historic run of small caps from WisdomTree, then a chart from the amazing Green Book from Leuthold that lays out the valuation argument against small caps relative to the overall market. [Mebane Faber]

Battle Of The Billionaires Erupts Over Keystone

The brawl is over an upcoming decision by the Obama administration about whether energy company TransCanada Corporation (NYSE:TRP) (TSE:TRP) should be allowed to build a massive oil pipeline, called Keystone XL, that will ship oil sands in Northern Canada to refineries in the Gulf of Mexico. [Lawrence Delevingne, CNBC]

These Funds Suggest the Muni Bond Fire Sale is Over 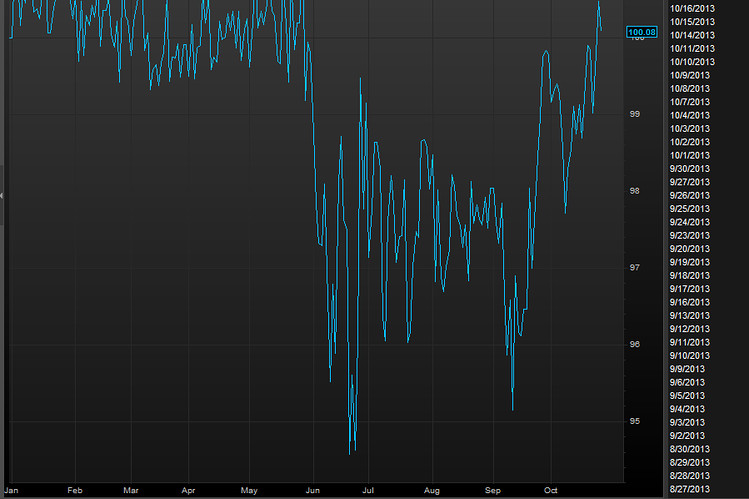 Why Closet Index Trackers Need To Be Regulated

The Great Rotation Has Already Happened in ETF’s

Could An ETF Price War Get Ugly?

Fidelity launched 10 new passive sector exchange-traded funds — they started trading at 9:30 a.m. — each with a total expense ratio of 0.12% and available commission-free through the company’s brokerage platforms. [Chuck Jaffe, MarketWatch]

Carl Icahn Tweets Aren’t Worth What They Used To Be

After billionaire activist investor Carl Icahn appeared on CNBC for almost an hour to discuss his proposal that Apple Inc. (NASDAQ:AAPL) CEO Tim Cook should initiate a $150 billion share buyback, Miller Tabak chief economic strategist Andrew Wilkinson pointed out in his “chart of the day” that Icahn is not even a top-2o shareholder of Apple. [Matthew Boesler, Business Insider] Related; Mr. Buffett, valued at more than $58 billion and the second-richest man in the world, according to Forbes, would be worth a mere 13 cents to Twitter, Inc. (TWTR) with his paltry four messages. Meanwhile, Mr. Bieber, No. 9 on Forbes’ Celebrity 100 and the most-followed person on Twitter, could be worth $762.89 thanks to his 24,000 plus tweets. [David Benoit, MoneyBeat]

What Happens When Wall Street Builds A Rental Empire

Most rental houses in the U.S. are owned by individuals, or small, local businesses. Culpepper’s landlord is part of a new breed: a Wall Street-backed investment company with billions of dollars at its disposal. [Ben Hallman and Jillian Berman, Huffington Post]

When The SEC Does Its Homework

Its not fun being in the government’s crosshairs.  But there is comfort in knowing that the then Head of Enforcement at the SEC , Linda Thomsen went to the Nth degree to make sure she knew the smallest details of my case before moving forward ! [Mark Cuban, Blog Maverick] Related; During my interrogation by SEC attorney Jan Folena there were a lot of  interesting moments. Some from my viewpoint seemed to make her physically shake.  My experience in the witness box was not anywhere near what I expected. Particularly the actions and responses of Ms Folena. [Mark Cuban, Blog Maverick]

Georgia man runs into burning home to get beer

A man who walks with a cane was not injured when he ran into a burning Columbus house to recover beer he left inside the house. [Fox News]