The final EIA Inventory report for 2012 is coming out on Friday, and according to the API report, Cushing inventories increased another 2.23 million barrels to a record 49.2 million. All this build in Cushing happened even as the Seaway pipeline began pumping crude from Cushing, Oklahoma to a major U.S. refining hub in Houston, Texas in May of 2012. 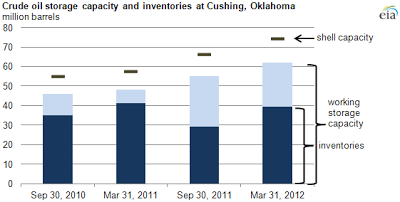 The problem here is that U.S. and Canadian oil production is increasing faster and producing more oil than Cushing can build extra storage or increase pipeline capacity, and or bring new pipeline projects online from Cushing to Houston.  Oil stored at Cushing basically jumped from 30 million barrels to 50 million barrels in 2012, an increase of 20 million barrels (66 percent increase) which is just an incredible feat, just imagine if there were no pipelines pumping oil to Houston in 2012. In fact, full capacity including shell capacity would have been completely filled to the gills, and Cushing would have to stop accepting oil into its facilities.
Goldman Sachs Forecasting Prowess
Goldman Sachs Group, Inc. (NYSE:GS) forecast that the spread between Brent and WTI would reduce to $4 at the beginning of 2013, they forecast this early in 2012, and have since backtracked from this forecast, but even their backtracking seems way off at this pace.

But you cannot take anything Goldman Sachs Group, Inc. (NYSE:GS) says about oil forecasting with any seriousness, given their past record on price predictions, remember the $200 oil price forecast, what Day Dreamers… the global economy would collapse long before it got to $200 as the entire global supply chain from China Manufacturing, to Country specific subsidies for its citizens rely on a certain price input to make their numbers work. Blow out that input cost by even 30%, and the proverbial recession starts hitting the fan, and something the Saudi`s have known for a while, you won`t be able to give oil away at $35 a barrel!
We have had paper recessions thanks to the actions of the Central Banks for the most part, but a true organic recession started by out of control input costs cannot be alleviated by any central bank planning, and that is what Goldman Sachs failed to realize. Once Oil gets too high, it effectively slits its own throat!
Holiday Pump Job & Speculators
The speculators are pushing oil up again over the past two weeks during thinly traded holiday market on low volume with the diehards trying to make their yearly numbers look better, but the fundamentals for WTI and Brent don`t bode well for 2013 with the North American production output putting downward pressure on WTI prices, and the expected increase in Oil production from Iraq, Kazakhstan, Sudan and others putting downward pressure on Brent prices.
Speculators have all but left the Gold and Silver markets towards the end of 2012, are the oil markets the next frontier where the easy bullish speculation dries up? Right now everyone and their uncle is in the weak Japanese Yen trade, but that speculation has already come along way, it is very crowded, and it wouldn`t be the first time that Japan fails to weaken their currency. How many times has this trade failed over the past 3 years?
US Austerity Only a Matter of Time
With the global economy basically being artificially supported by central bank policies, the real issue is of a global debt problem that is not getting any better, only worse, and is unsustainable. The global economy appears headed for another decade of deleveraging in a massive deflationary loop cycle that has only just begun for the most powerful consumer of Oil products in the world, namely the U.S. economy, as the United States has yet to take their austerity medicine, and that is the real elephant in the room. 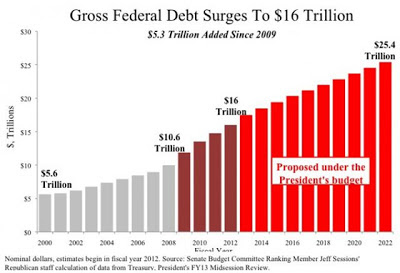 When this finally happens expect WTI and Brent to be priced in the $45 a barrel range. As when the U.S. gets a cold, the entire global supply chain gets the flu! And with a 16 trillion dollar debt issue and climbing, that`s going to be one major austerity project, then the real deflationary loop kicks in.
The government cuts back spending, the economy goes into recession, china manufacturing recedes, oil and commodities contract, those resource laden economies go into recession, and the whole loop feeds back into itself, and you have a global recession of epic proportions. It`s just a question of when the United States can no longer kick the can down the road before the entire world is held hostage just like Europe over the U.S. version of an austerity mandated project.
Supply versus Demand
So in the short term they can build more storage facilities and more pipelines out of Cushing, but the North American production increases are always going to be more than the measures applied to alleviate this glut because the fundamentals of high oil prices in a 2% at best economic growth engine that is borrowing the future through artificial means of stimulation at the present just reinforces that the real issue is one of demand versus supply. At current prices there is going to continue to be more production coming online versus the demand to eat up that supply. Simple economic theory, and the solution is probably two-fold: a reduction in prices to increase demand, and ultimately, a cutback in production around the world. 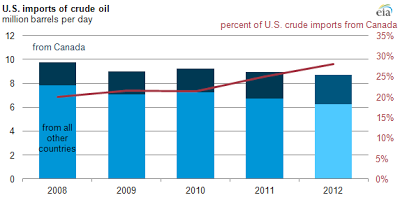 Bear Cycle in Oil
There will be a major pullback in oil prices, we are presently already in the deflationary stage, but you haven`t seen anything yet, because we are increasing production (we currently produce more than we consume each day)  around the world as prices are real high relative to demand. What happens when the central bank stimulus stops being effective, and it stops altogether, and the debt issues are finally addressed? That is when the real recession takes hold, and the only solution then to massive oversupply is stopping production. The real question is who stops production: is it North America, Russia or OPEC? The real answer in the boom and bust cycles that play out in oil industry is all of the above, in the end everyone is going to have to cut back production as prices are going to drop like a rock in the next bear cycle in the oil industry.
OPEC Losing Relevance & Power
You see the diamond industry has an effective cartel to keep supply off the market, but since we do not have a global cartel, and because of the boom price in crude oil over the last decade, we now have a global production market once again in oil with all kinds of new participants all over the world who are not members of OPEC, so with robust growth in global production around the world, and no global cartel, you get an oversaturation of the market, and that is what we are starting to experience right now, and its effects will really start to show up in 2013 and 2014.
2015 Outlook
Then in 2015 companies are going to start losing money in their production projects, and some tough decisions are going to have to be made. And this all assumes a decent global economy, I figure the U.S. will be able to kick the majority of the can down the road for the next 2 to 3 years, but after that the austerity project in the U.S. will become front and center. And you think politics are nasty now, just wait till 2015/2016 that`s when the fun really starts.
In fact we may have to create an entirely new independent political party to clean up the budget deficit and spending mess that Washington has morphed into today. But make no mistake it will be cleaned up one way or another, either through austerity or outright default!
So enjoy your job in North Dakota while you can, be sure to put extra income into savings, because my guess is that in four years, after oil pulls back, those projects are no longer sustainable, and the world goes back to the default supplier of OPEC until the next Boom investing cycle starts all over again.
Retail Investing Trends With TradeZero America’s Dan Pipitone