After reporting an uptick of national unemployment rate of 8.3%, it is of little surprise that the Labor Dept. said on Friday that jobless rates rose in 44 U.S. states in July, with many states showing a monthly increase in more than three years.

On the surface, the U.S. national unemployment rate has seemingly dropped almost a full percentage point from the high of 2011.  Nevertheless, the record rate of people dropping out of labor force, and long term unemployment has become a bigger problem than ever before, suggest the real labor market is worse than the headline unemployment rate entails.  Remember, people in the “Not in Labor Force” bracket (e.g., going back to school, discourage job finders quit looking, etc.) are not counted as “unemployed.”

Monthly job gains have averaged 150,000 this year, close to the 150,000 to 200,000 a month of new jobs Fed Chairman Bernanke said needed to reduce the unemployment.  But eventually, a significant number of people will come back in the labor force to find jobs again, coupled with the increasing  difficulty for the long-term unemployed to land a job, expect the jobless rate to remain sticky for the next few years.

Federal Reserve has a dual mandate to pursue price stability and maximum employment.  Right now, while the annual trend in prices is trending closely to the Fed’s 2% target, the headline unemployment rate is still well above the pre-recession level of around 5%.  The chart below from the CFR (Council on Foreign Relations) plots actual inflation and unemployment performance relative to the two targets (CFR uses 5.6% as Fed’s target for unemployment) since 2002. 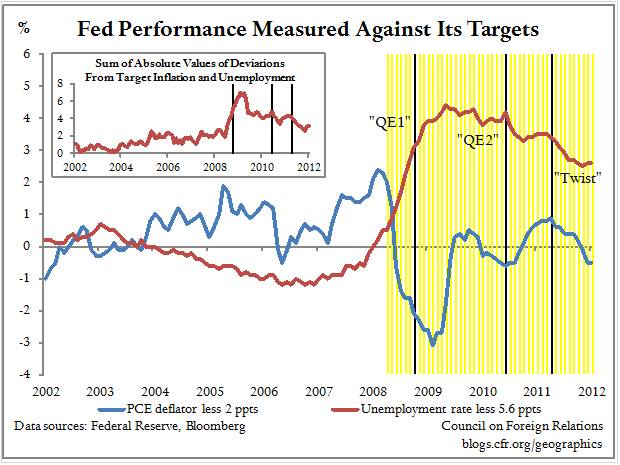 As the chart shows, the sum of the deviations has declined since the peak in July 2009, but it is still well above zero (zero being a benchmark for fulfilling the dual mandate), which suggests that the Fed will continue to be accommodative.  In fact, given the debt crisis and recession in the Euro Zone, and the significant slow-down in China, traders’ expectation of a 3rd round of Quantitative Easing (QE3) from the Fed is probably the only thing that’s holding up the equity as well as the commodity markets.

Our observation is that the Fed seems to have a tendency to draw a straight line between the increase in stock market performance to the GDP growth and an improved employment.  That assumption might be valid pre 2008 financial crisis.  However, the deep scar from the Great Recession has left corporations running scared to “streamline” operations at an unprecedented pace that the increase in corporate profit and stock price does not necessarily translate into more investment and more hiring into the real economy any more.

Fundamentally, monetary policy by central banks has little direct impact on the labor market, which is part of the reason why almost all central banks in the world has only one explicit primary directive – price/inflation stability (although unemployment may be part of the implicit macroeconomic factors in the decision-making process.)

More importantly, QE by the central banks is meant to loosen credit lending, which in turn should stimulate the economy.  But as Fed’s two previous QE’s have demonstrated, due to the structure of current global banking and financial system, QE has only mostly benefited banks to hoard cheap capital from the government to speculate in commodities and stocks to get better returns, rather than circulating and lending to business and consumers like banks are supposed to.

Signs of inflation manifesting are in the “non-core” items (i.e. Food and Energy) not on Fed’s “watch list.”  With the employment situation unlikely to improve significantly in the medium term, Fed could fall into the ‘unemployment-QE’ cycle feeling compelled to “do more” at the expense of inflation (it is essentially a bet on how much QE before rampant inflation), thus the greater good of the nation’s economy.