It has been a roller-coaster of a day so far for tech sector deities Apple Inc. (NASDAQ:AAPL); one which must have set many of the company’s board on the edge of their seats at the annual Worldwide Developer’s Conference.

The day started off with the expected self-congratulatory keynote speech of Apple CEO Tim Cook; the focus being Apple’s updated mobile operating systems for its iPhone and iPad.  The new operating system iOS6 will feature enhanced integration with Facebook, as well as improved mapping functions.  The release date has not so far been made public, but most observers imagine it will be no later than Fall 2012.

At the same time as the updated operating system is rolled out to Apple’s mobile devices, enhanced features will be added to the available repertoire of iPhone and iPad users. These innovations include such the new Siri voice recognition software will also become available, along with the mobile FaceTime video conferencing app, which may well provide the first serious challenger to Skype’s dominance in the field.

It is almost a year to the day since Steve Jobs stood at the podium at the very same conference, just a few months before his untimely death.  Since then, no one has been under any illusions that Tim Cook had some very substantial shoes to fill; and the new Apple front man has had his work cut out proving to the world that he is worthy of carrying on Job’s mantle. The innovations ushered in by iOS6 are classic Apple material, and Cook and his tech gurus should have every reason to indulge in a little back patting.

However, the clear message from the markets is that investors are less than impressed. The not so veiled message behind today’s announcements is a further cooling of Apple’s dalliance with Google in favour of snuggling into bed with Facebook.  It may be the recent sour luck of the Social Media giant rubbing off on Apple?

Be this as it may, the figures speak for themselves – and the current paucity of internet babble among analysts suggests a state of bemused shock.  After a sustained and very healthy climb over the weekend the shares started to tumble from 12 pm today EST.  At the close, shares were  down 9.15 points at 571.17 – and there does not so far seem to be any sign of a convincing rally, despite a couple of feeble attempts in the early afternoon. 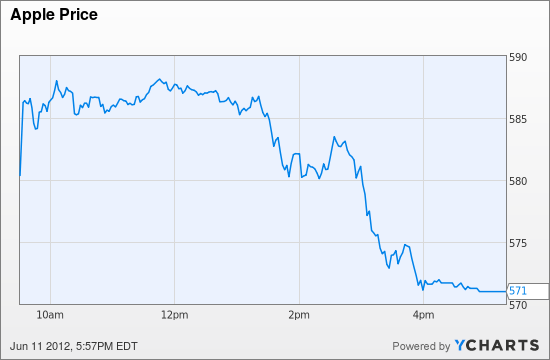 With Apple’s chiefs scratching their heads at this unexpected turn of events and investors obviously spooked, it is anyone’s guess how this freefall is going to pan out.