The Troubled Asset Relief Program (TARP) is a program initiated by the US government, funded by taxpayers, in October 2008 to bail out the banking and housing sector after the 2008 financial crisis. Due to the program’s complexity and “repayment” schemes, there has been different estimates of what TARP would ultimately cost.

We looked at the various TARP estimates in August, 2011 trying to shed some light on two very fundamental questions — (1) Where has Uncle Sams’ bailout money gone (2) Has the money been paid back yet.  At that time, we found some published non-government sources of the “amount outstanding” on TARP ranging from $239 billion tracked by Pro Publica to NYT’s $480 billion (CNNMoney data came to $357 billion).  And there’s also one jaw-dropping outlier–$1.5 trillion–estimated by the Center for Media and Democracy (CMD)

Even after taking into account of government sources such as Office of Management and Budget (OMB), the Congressional Budget Office (CBO), the U.S. Treasury Dept. is probably the only one repeatedly preaching the “profitability” of TARP.  After proclaiming that “Repayments to Taxpayers Surpass Tarp Funds Outstanding.” in June 2010, Treasury came out with this update earlier this month:

“Overall, the government is now expected to at least break even on its financial stability programs and may realize a positive return. Treasury’s TARP investments and overall stake in AIG, purchase of mortgage-backed securities, and Money Market Fund guarantee program are each currently expected to realize an overall positive return for taxpayers.”

A week later, along came a congressional report by SIGTARP (The Office of the Special Inspector General for the TARP) pouring ice water on the seemingly overly optimistic Treasury:

The table below from SIGTARP report lists the most recent TARP program estimates from three agencies. 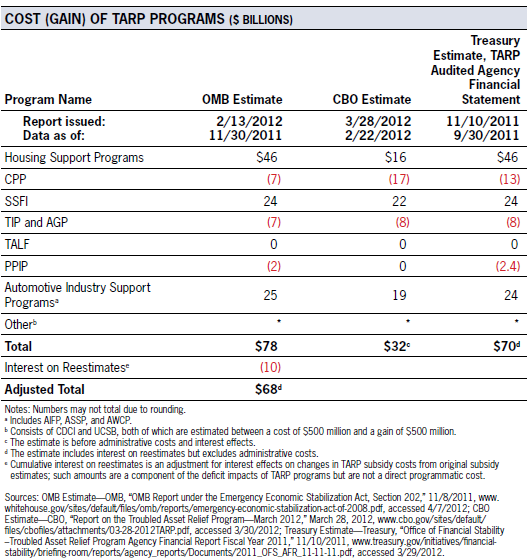 The update from Pro Publica, which tracks both the broader $700 billion TARP bill and the separate bailout of Fannie Mae and Freddie Mac, showed $225 billion is the net still outstanding as of Apr. 18, 2012.  The tally from NYT stile as of April 28 came to $329.3 billion of fund not returned.  CNNMoney data suggests $356.2 billion “invested” within TARP, and $118.5 billion paid back, leaving 237.7 billion still outstanding.

Most of the outstanding TARP money is in the form of equity ownership in 437 institutions as of March 31, 2012. Treasury (and therefore the taxpayer) remains a shareholder in companies that have not repaid the Government.  According to SIGTARP’s report, the difference in the TARP cost estimates from the three agencies are mainly in the assumptions regarding the value for AIG, GM, Ally, etc. stocks, future funds spent/received, and inclusion/exclusion of certain write-offs.  So essentially, it is difficult to come up with a good estimate as there’s not a clear guideline for “assumptions.”

Nevertheless, don’t think the buck stops here–SIGTARP report indicated $50.2 billion of TARP funds remain available as of March 31, 2012 to be drawn down by TARP recipients under three of TARP’s 13 announced programs mainly supporting banking, housing and auto sectors.  That means the $118.5 billion TARP loss concluded by SIGTARP could get even worse as more fund is still to be disbursed.

So it is fair to say regardless of the assumptions, it’d be hard pressed for TARP to break even let along turning a profit.  If we count the other programs such as the Fed’s $1.2 trillion secret loan to Wall Street, the likelihood is quite small that U.S. taxpayers would ever come out of this hole dug so deep by the banking crisis and the subsequent secret and not-so-secret bailouts.  Sadly, it looks like the 99% will continue to bear the burden of saving the 1% in the foreseeable future.