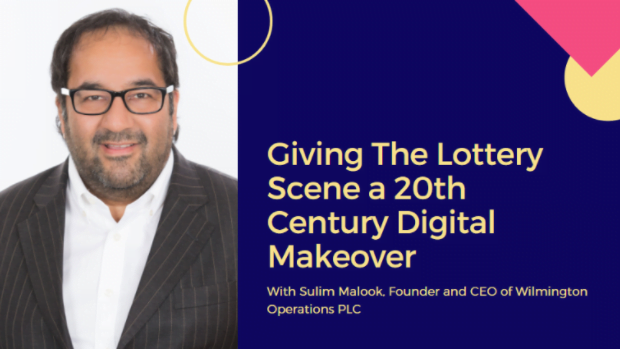 But there’s two significant differences, it is played using Bitcoin, and the jackpots on Crypto Millions Lotto are much bigger. They start at $10 million but can increase to more than $250 million. That’s bigger than any of the individual state lotteries. It’s also bigger than anything else you’ll find online.

Founder Sulim Malook, who also serves as the first CEO of Crypto Millions Lotto is unlike many crypto founders in that he has both a solid financial background and experience in creating the most downloaded stock market app during its time, leading Malook to successfully float the company on the German Stock Exchange.

Sulim, can you tell us about your background?

I have always been fascinated by the financial markets. That probably stems from having spent 20 years as a bond trader. In the early noughties, I developed a stock market app which was eventually floated on the Deutsche Börse. As mobile phones became more widely used, I created a lotto-style gaming app based on the share price performance of the world’s largest companies.

This evolved into a lottery website where we operated online lotteries for football clubs and charities in Africa. In order to expand that business, we had to operate across borders, and that’s when we adopted Bitcoin as our standard currency. Crypto Millions Lotto was born.

Crypto Millions Lotto as its name suggests is a digital lottery, so users play with digital currency. In this case it’s Bitcoin. So, players deposit Bitcoin to play, and if they win, they get paid out in Bitcoin. One big exception is that if they’re lucky enough to win the jackpot, they have the option to claim their prize in Bitcoin or in a local currency of their choice.

How can blockchain help the gaming and prediction market industries?

Blockchain is only part of the solution for making digital lottery transparent and trustworthy. We use blockchain for all Bitcoin transactions, such as player deposits, withdrawals or purchases. But there is another, equally important, element to transparency and player trust.

In any gambling product that uses Random Number Generators, or any pooling of bets, so-called pari-mutuel prizes, where payouts depend on the number of tickets sold, there needs to be complete transparency so that people have confidence in the game.

To make prizes transparent, we don’t base them on the number of tickets sold. The amounts of our prizes are all fixed in advance, and our payouts are based on established, televised National Lottery draws, which we have no control over. To give our players complete peace of mind, we insure our jackpots with the world’s leading prize indemnity specialist. So, we guarantee that winners will get paid.

They say the lottery is a tax on the poor, isn’t this risky for users?

No, I don’t see it that way at all. Lottery is a form of entertainment. It’s no more a tax on people than buying a ticket to watch your favourite football club. People sometimes characterise it as a tax because the funds raised by governments from state-run lotteries are then re-distributed to various good causes and charities. But to call the lottery a tax on the poor because working class people are more inclined to play, is just not true. For example, in the UK, seventy per cent of the adult population play the lottery – that’s 36 million people from a wide range of ages and backgrounds. Its appeal is very broad.

But don’t listen to my words, listen to the former CEO of the UK National Lottery. This is what she said about what happens when there is a big rollover: “If we get a massive rollover jackpot, I can guarantee that my 20 best-selling lottery stores will be in the City and Canary Wharf, and usually Tesco’s (the biggest UK grocery store chain) best-selling store is in Kensington and Chelsea.”

That’s the financial district and one of the most upmarket parts of London. She goes on to say: “The City boys won’t get out of bed for £1.8 million, but when it’s a rollover, they all come out to play.”

Buying a lottery ticket is basically paying a small price for a big dream, and everyone dreams. Some dream of a promotion, some dream of a new job, lottery players dream of winning millions, or tens or even hundreds of millions.

So, we don’t acknowledge the description of the lottery as being a tax on the poor.

How dependent are your businesses on crypto prices?

Neither Crypto Millions Lotto, nor Lucky Gift Cards, are in any way dependent on crypto prices. The reason for that is all of our ticket prices and our prizes, are based on an approximate price in US dollars and then converted to Bitcoin.

On the plus side, a rise in the price of Bitcoin is a bonus to any of our players holding Bitcoin in their account. A rise also has the effect of more people getting involved in Bitcoin, which in turn increases the number of people who can play Crypto Millions Lotto.

What role does Ethereum play with your work?

Firstly, we believe it has some performance issues that make it unsuitable for the kind of thing we’re doing. But it’s also expensive to process and we understand it has issues with scaling.

Bitcoin is the leading and most widely followed cryptocurrency, hence we are totally committed to Bitcoin.

What do you see for the industry over the next five or ten years?

The biggest thing we see is a move from traditional lottery to digital lottery, and that will bring several big changes.

First, it’s much easier to scale a digital offering than one that relies on people visiting shops and paying cash. COVID has exposed the flaw in that model. Shopkeepers are resistant to digital change because they rely on the footfall, but lottery operators see digital as the future. While they argue between themselves, we’ll just bypass them.

Our vision is a lottery that’s played entirely online, from anywhere, without any paper tickets. That “play anywhere” idea, will expose the complexity of trying to use traditional currencies cross border, which in turn will usher in the need for a borderless currency, like Bitcoin.

The idea of a “national lottery” that is only open to people in that country will slowly disappear and will be replaced by a global, borderless lottery, played from anywhere, by anyone.

You claim to be giving the lottery a 21st Century Makeover. Why is there a need for that?

Lottery is one of the oldest, most popular, and widely played games in the world. Everyone understands the lottery. It was first played in the eighteenth century, but we think it’s now time for a makeover.

It is still played predominantly offline and is subject to lots of restrictions. For example, you can only play state lotteries in their home country. In some countries you can only play by going to a shop and buying a paper ticket using cash. We’re going to change that.

By making it digital, with Bitcoin at its core, we are taking all these barriers down. No queueing in a shop, no paper tickets, no missing the draw. We imagine a world anyone over eighteen, in countries where gambling is allowed, can play lotteries from all around the world, all from the comfort of their own home, with winnings seamlessly credited to their online account. That’s what a lottery should look like in the digital age.