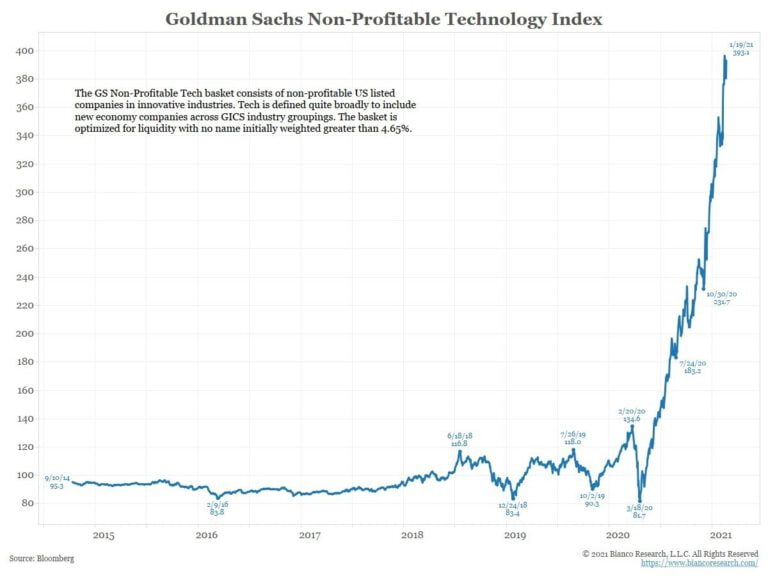 1) Tech giant IBM (IBM) reported dismal fourth-quarter earnings on Thursday after the close, and the stock fell 9.9% on Friday – continuing its steady decline since it peaked eight years ago.

At roughly $118 per share, the stock is below the level it reached more than 21 years ago, as you can see in this chart:

IBM is a classic melting ice cube. Revenue shrank 6.5% in the fourth quarter, continuing another awful trend – the company has reported only four quarters of year-over-year revenue growth in the past nine years, as you can see in this chart:

I've been warning my readers to stay away from IBM as early as January 2000. Here's the conclusion of an article I wrote in February 2002 entitled IBM's Accounting Tricks:

I first warned investors about IBM in January 2000, highlighted last May how the company's overly aggressive pension-fund accounting was inflating earnings, and only a month ago, wrote that IBM "recently reported fourth-quarter sales that were lower than those five years ago. With no growth whatsoever in the top line, and the bottom line only up slightly (due primarily to lower taxes and various accounting gimmicks), is IBM really worth nearly triple the price it was back then? I think not."

Lou Gerstner deserves credit for turning IBM around in the early and mid-1990s, but over the past few years, in my opinion, his main accomplishment has been creating the appearance of robust growth, despite the company's stagnating business, with all sorts of creative accounting tricks – most likely legal ones, to be sure, but tricks nevertheless. I predict that these shenanigans will come to light, the stock will suffer – and so will Gerstner's legacy.

When I saw that Warren Buffett had purchased IBM for Berkshire Hathaway's (BRK-B) portfolio in 2011, I was so concerned that – for the only time in my life – I wrote to him to tell him I was convinced that he'd made a mistake... so much so that I was short the stock. Here's an excerpt from that letter:

My cousin's wife worked at Rational Software for a year or two before it was bought by IBM in early 2003 and has worked at IBM ever since (she's in technical sales). She's been pretty happy there, but is now looking to leave, in part because she's sick of the bureaucracy and also because of the feeling of stagnation.

After reading my short thesis, she wrote: "Yes, the only way they are making their numbers is by cutting costs internally. Sadly, I too predict their decline. Products are crazy complex and the new breed of software in the cloud is much easier to deploy and use."

Prescient words indeed... I just wish I'd paid more attention to her last sentence and bought a bunch of cloud computing stocks!

2) A hat tip to Jim Bianco of Bianco Research for tweeting this chart, which shows the extraordinary performance of unprofitable US-listed tech companies:

The Wisdom Of Crowds

3) I came across this interesting bit of history in the book Wealth, War, and Wisdom by Barton Biggs:

I first became fascinated with the subject of the wisdom of markets when, by chance, I discovered that the British stock market bottomed for all time in the summer of 1940 just before the Battle of Britain; that the U.S. market turned forever in late May 1942 around the epic Battle of Midway; and that the German market peaked at the high-water mark of the German attack on Russia just before the advance German patrols actually saw the spires of Moscow in early December of 1941.

Those were the three great momentum changes of World War II – although at the time, no one except the stock markets recognized them as such. This, to me, confirmed the extraordinary (and unrecognized) wisdom of market crowds.