ValueWalk
Home Business Should You Buy Payment Disruptor Stocks In 2022? 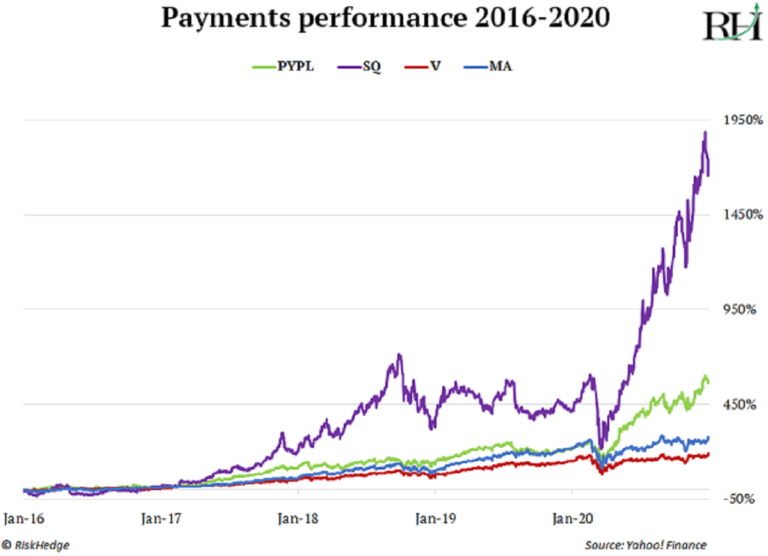 There’s a big “threat” looming over one of my favorite groups of stocks. After years of running higher, these stocks reversed course in 2021…

And are now trading at a steep discount.

But while most folks are getting this story completely wrong…

I’ll show you why this “threat” is presenting a great buying opportunity.

In short, payment disruptors have seized banks’ most profitable businesses one by one, leaving them with scraps.

More than 40 million people now use Block’s (NYSE:SQ) Cash App at least once a month. That’s roughly one in eight Americans.

In short, payment disruptors have turned Wall Street on its head. And it’s made them among the fastest-growing and best stocks to own from 2016–2020: 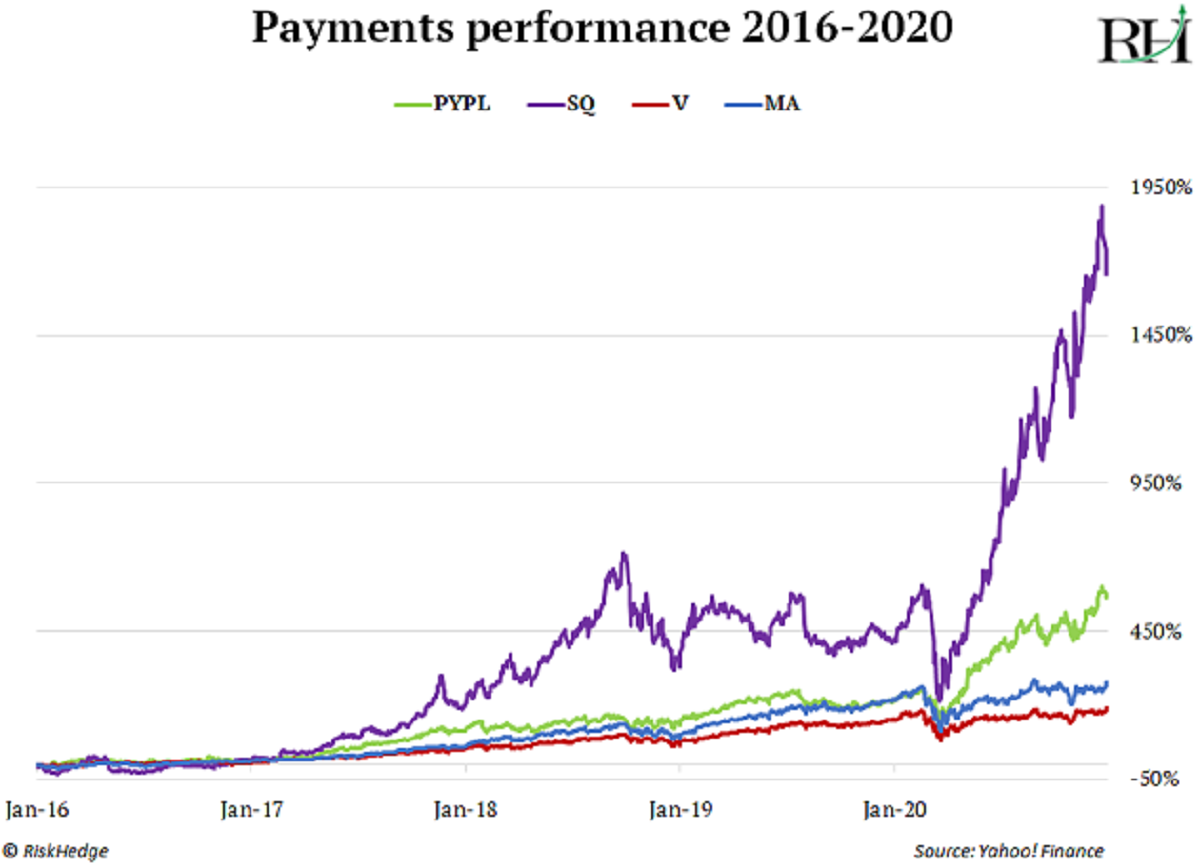 Visa and Mastercard had one of their worst years in almost a decade.

PayPal, Block (formerly Square), and almost every other money disruptor slipped into the red. 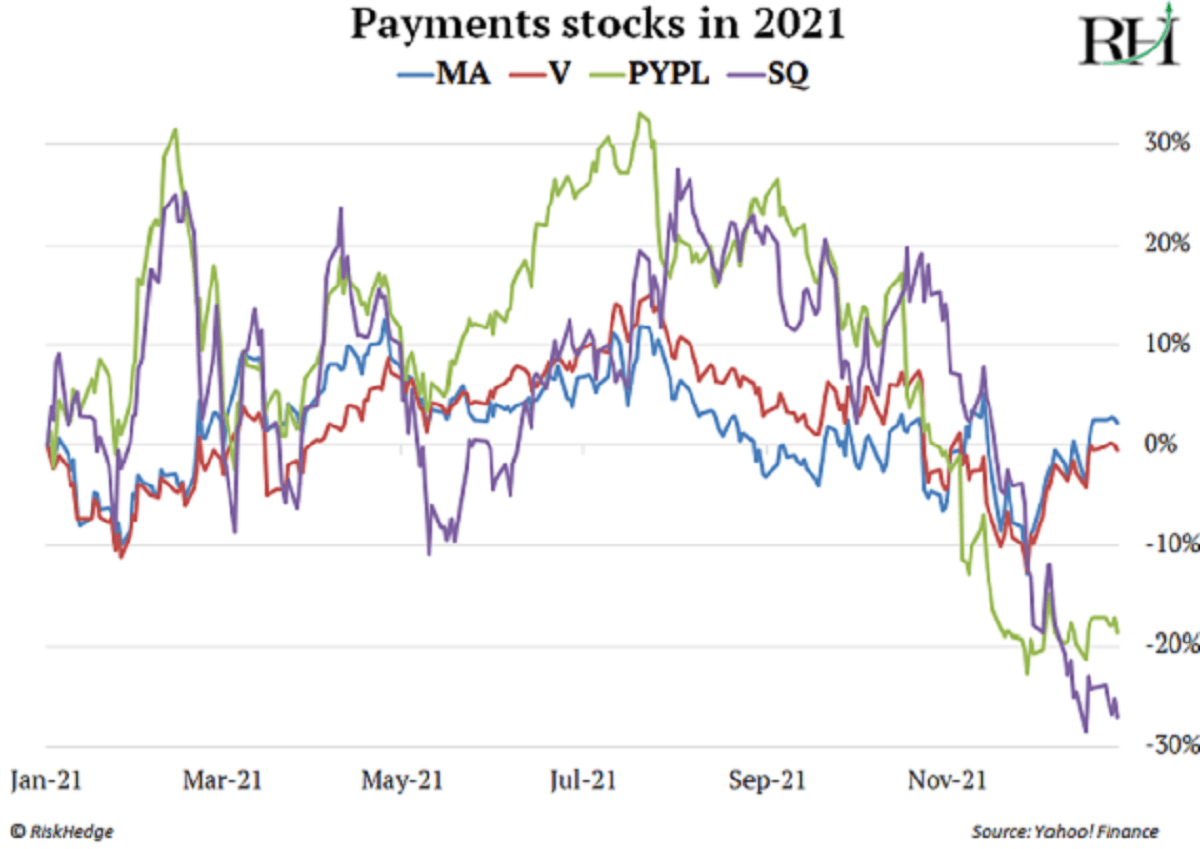 What’s going on with these former stock market darlings?

There are a few reasons for payments stocks’ recent struggles.

But one of the biggest “threats” can be summed up in four words:

As the name suggests, buy now, pay later lets you break up purchases into installments.

Say you buy a pair of sneakers for $100. Instead of handing over 100 bucks at the cash register, you can pay in four $25 installments over a few weeks.

Last year, consumers made $100 billion worth of retail purchases through BNPL companies like Affirm, Klarna, and Afterpay. That’s a huge jump up from $24 billion in 2020.

In short, BNPL firms don’t run on top of the existing payment networks that Visa and Mastercard largely own.

They’ve crafted a whole new payment network, which cuts credit card firms and other players out of the picture. This closed loop allows BNPL companies to keep all the fees for themselves.

The concern is BNPL firms will steal an ever-increasing share of payments for themselves, dampening growth for PayPal, Visa, and other payments stocks.

As I mentioned, BNPL firms like Klarna and Affirm have created their own payment networks.

The thing is… roughly 85% of installment payments are made with debit cards. And guess who issues those cards?

Afterpay, the firm that pioneered BNPL, teamed up with Mastercard for its debit card. 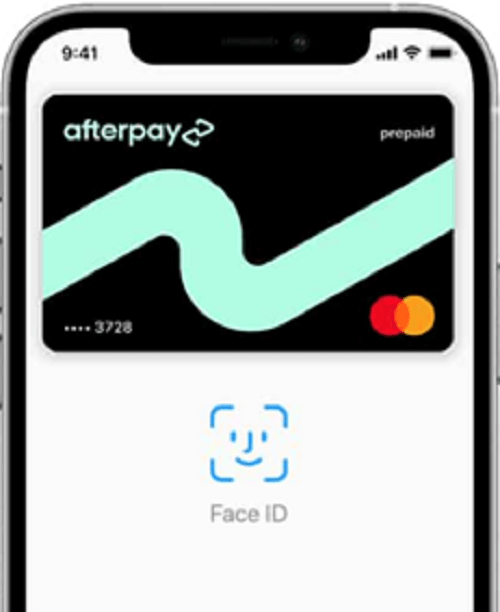 BNPL is not a threat to these payment giants… it’s an opportunity.

Affirm’s CFO Michael Linford agrees BNPL is an opportunity for payment networks. He recently said: “You can’t say Visa is a loser here. We ride Visa rails for a meaningful number of our transactions.”

BNPL is also a moneymaker for PayPal and Block.

This past quarter it processed $2 billion+ of installment payments. PayPal quietly built a BNPL business that’s 75% the size of Affirm.

And back in June, Block acquired Afterpay. Over 100,000 businesses and 16 million customers have used Afterpay. Block now gets to collect all those fees.

A few years back, PayPal created a closed-loop network and tried to cut credit card giants like Visa out of the picture.

It just had to convince folks not to link their cards to their PayPal accounts… and instead pay using PayPal’s digital wallet. PayPal hid card payment options and put its own wallet front and center.

It was a total failure.

Today, most PayPal transactions are paid for with debit cards.

BNPL firms will suffer the same fate. They need to tap into the five billion or so plastic cards across the world to attract users.

What if BNPL firms do succeed in building a closed-loop system?

They looked at what would happen if BNPL accounted for a quarter of all digital payments and these folks chose not to pay with a card.

Even in this worst-case scenario, buy now, pay later firms would steal just 2.6% of Visa and Mastercard revenues.

That’s nothing for companies that grow sales roughly 15% per year.

I mentioned consumers made $100 billion worth of retail purchases last year through BNPL companies. That’s a drop in the ocean compared to the volume payment giants handle.

Look at this graph showing how small the buy now, pay later “threat” really is. 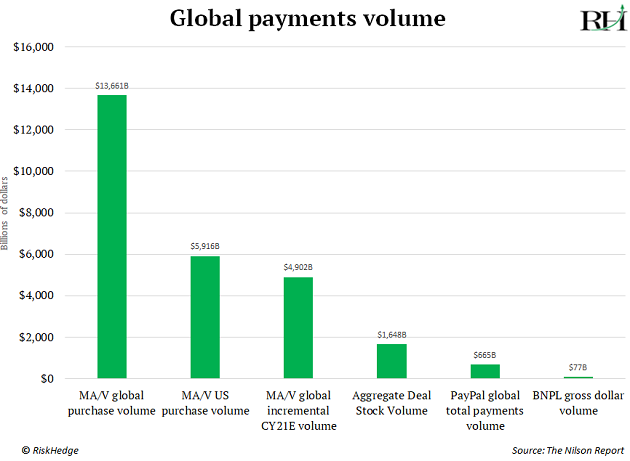 Don’t be fooled: BNPL isn’t a threat to payments stocks. It’s an opportunity. That’s why I recently made PYPL, MA, and SQ all “buys” in my premium Disruption Investor portfolio.

Next week, we’ll dig into another big threat weighing on payments stocks: the US Federal Reserve’s new payment system.