Kellogg Company (“K”, or “the company”) is substantially less profitable, more levered, and more expensive than it seems. We believe K will reduce or miss on 2018 guidance targets and cut its dividend or lose its credit rating, says Prescience Point  see their short thesis below.

A Severely Malnourished Company We are short shares of Kellogg Company, the maker of Froot Loops, Pringles, Rice Krispies and other snacks and cereals. We believe the company is engaged in an unsustainable accounting charade to mask revenue and profit shortfalls and will be forced to choose between cutting its dividend and losing its credit rating; shares could fall 35%.

Kellogg’s stated purpose is “to nourish families so they can flourish and thrive.” Unfortunately, when it comes to its business, the company has ignored its own mantra. Sales of Kellogg’s breakfast cereals and snacks have been falling for years as consumers move to healthier, less-processed alternatives. Instead of innovating and developing new products, it watched from the sidelines as competitors gained market share.

To mask its deteriorating performance, Kellogg has instituted massive cost cuts and used accounting gimmicks and financial engineering to boost short-term sales and cash-flow numbers. These artificial performance enhancers have triggered tens of millions of dollars in bonuses for Kellogg’s executives while employees were systematically laid off. After doubling his compensation to $13 million in 2017, Kellogg’s then-CEO, John Bryant, abruptly retired at the ripe old age of 52.

We believe the chickens are about to come home to roost, and newly-installed CEO Steve Cahillane will need to lower expectations, cut the dividend or find a miracle new product in order to avoid being downgraded to junk. He has referred to 2018 as a “transition year,” which should give pause to any investor expecting positive results.

Our analysis is based on a months-long deep dive into Kellogg’s business, which included forensic analysis of the company’s accounting and financial statements for the past decade, interviews with former employees and industry experts, and an examination of management’s own words on conference calls and in other public venues.

We even spoke to the company directly, asking pointed questions of its Investor Relations department about some of the financial engineering and accounting changes we observed. IR admitted to us that many of the moves were “optical” in order to preserve the appearance of positive.

At its core, the Kellogg story is one we’ve seen many times before in corporate America. An old and venerable brand fails to invest for the long-term in the face of material challenges to its core product line – namely sugary cereals and carb-heavy snacks. Kids and adults just don’t eat as much cereal for breakfast anymore despite Kellogg’s efforts to entice them with new products like Donut Shop Pink cereal and Pop Tarts Strawberry Milkshake. But Kellogg chose to cut costs rather than invest.

“For more than 100 years we’ve been working to serve the world a better breakfast,” Kellogg says on its website. Truth is, they are serving the same thing while their customers have moved on.

In recent years, we believe the Company’s reported financial statements have become dislodged from economic realities. Specifically, we will explain why we believe:

During the quarter ended April 2, 2016, we executed a discrete customer program to extend customer payment terms. In order to mitigate the net working capital impact of the extended terms, we entered into an agreement to sell, on a revolving basis, certain trade accounts receivable balances to a third party financial institution.

Based on conversations with several individuals in the consumer packaged goods industry and analyst community, we believe Kellogg’s extended payment terms program may have been implemented to offset the income statement impact from aggressive terms from some of Kellogg’s largest customers (e.g.

Walmart).  For example, a large customer tells Kellogg it can pay sooner but wants a large discount for doing so or it’s going to extend payments beyond its ordinary terms. As a result, Kellogg then uses the same strategy on its own vendors.  In effect, Kellogg is able to conserve its income statement (i.e. not take a hit from accepting large discounts) at the expense of its working capital levels (i.e. accepting the extended payment terms from is own customers).  Alternatively, Kellogg could have also instituted the program to generate and/or incentivize additional purchases from customers.

Extended terms can provide a transitory benefit to revenue growth

Extending payment terms to customers allows a company to:

There are two primary benefits of a receivable factoring program: 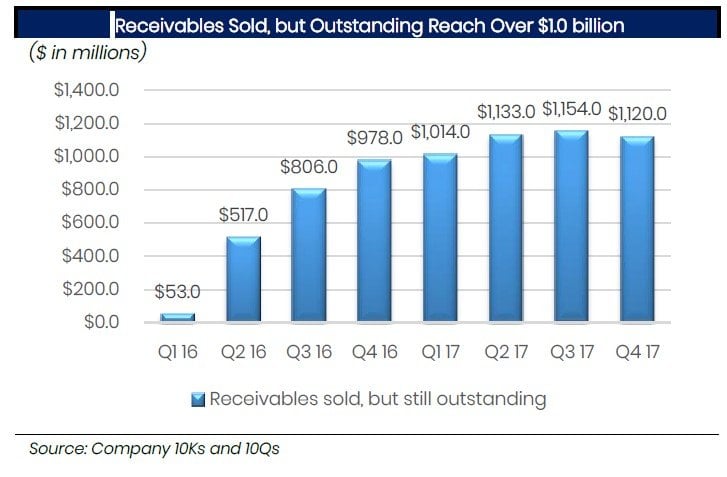