1) Stocks are selling off again this morning after these comments by Moderna (MRNA) CEO Stéphane Bancel: Moderna chief predicts existing vaccines will struggle with omicron. Excerpt:

Michael Gelband's hedge fund ExodusPoint ended 2021 on a strong note after its Rates strategies contributed 1.16% to overall performance in the month. According to a copy of the fund's December update to investors, which ValueWalk has been able to review, the ExodusPoint Partners International Fund Ltd rose by 1.95% during December, bringing its year-to-date Read More

The chief executive of Moderna has predicted that existing vaccines will be much less effective at tackling omicron than earlier strains of coronavirus and warned it would take months before pharmaceutical companies could manufacture new variant-specific jabs at scale.

Stéphane Bancel said the high number of omicron mutations on the spike protein, which the virus uses to infect human cells, and the rapid spread of the variant in South Africa suggested that the current crop of vaccines may need to be modified next year.

2) Here's a good summary of what we know – and don't know – about the omicron variant by Nicholas Christakis, a physician and professor of social and natural science at Yale University. Here are the first five tweets of a 31-tweet thread:

There's a new COVID-19 variant that has people worried. Let's talk about omicron. This assessment must necessarily be very preliminary, since we are in very early days (partly thanks to South Africa generously sounding the alarm!).

Three key issues are whether omicron is 1) more transmissible, 2) more deadly, and 3) more capable of evading current vaccines (or, somewhat analogously, whether it evades current antibody treatments or immunity conferred by prior natural infection, aka "immune escape").

Based on currently available technical data and on news reports from around the world, here is a *preliminary* opinion about these three issues, along with my level of confidence in these guesses.

Part of the explosion of cases of the omicron variant may relate, however, not to a higher intrinsic transmissibility (R0) but rather to its capacity (given its other known mutations) to partially evade existing immunity in the population and infect otherwise immune people.

88% Of Americans Are Worried About Inflation

3) Contrary to popular belief, being a contrarian is not a requirement to being a successful investor. In fact, people who take pride in being contrarian are generally the worst investors. This is because the consensus view – the herd – is right most of the time. That's why, if I had to choose, I'd rather be with the crowd than be a contrarian.

But really successful investors don't care either way. They think independently and rationally, neither taking pride in a contrarian viewpoint nor comfort in being part of the herd.

This topic has been on my mind because I definitely have an out-of-consensus viewpoint about inflation, given that a recent survey showed that 88% of Americans are worried about inflation.

As I've written many times before, I don't think the current high inflation we're experiencing is likely to persist... And to the extent that we have moderately higher inflation over the next few years, I view this as a good thing. Here's why...

Inflation is a combination of the price of "things" and the cost of labor. Regarding the former, prices of lots of things have skyrocketed thanks to a white-hot economy and supply chain congestion. But these pressures will eventually dissipate. Remember all the headlines about the soaring costs of oil, natural gas, lumber, and shipping? They've all come way down in recent months, as you can see in these five-year charts: 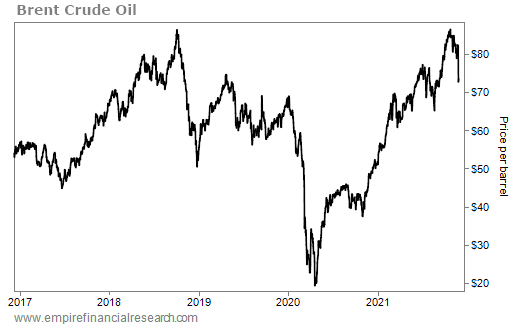 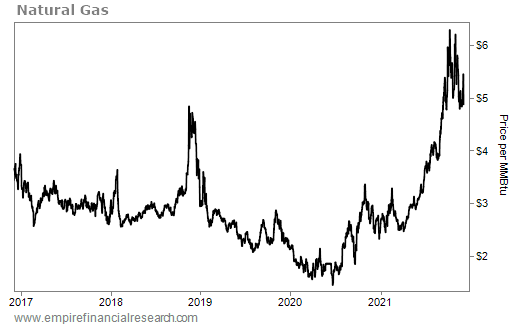 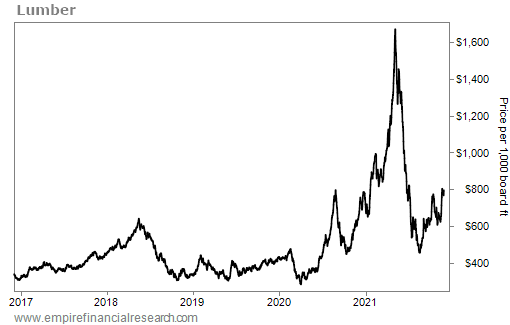 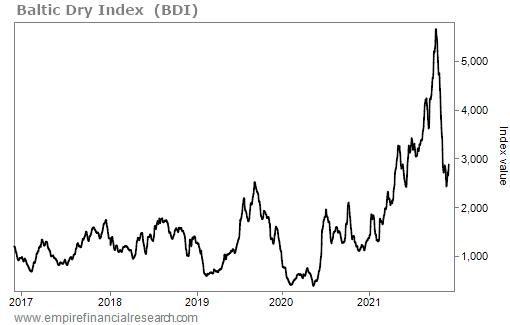 As for wages, permabear Fred Hickey wrote in the latest issue of his newsletter, The High-Tech Strategist:

Last week, the government reported that U.S. employment costs for Q3, including both wages and benefits, rose at the fastest pace in at least 20 years. Evercore ISI Company Surveys reported last month that a record 80% of companies expect to increase wages over the next 12 months.

I agree with Hickey's data – but not his conclusion that what's happening is a terrible thing. In fact, I think it's wonderful that American workers are finally able to demand – and get – higher wages for the first time in nearly half a century.

In an ideal world, employers and employees would share equally in increased productivity. That's what happened in the U.S. between 1948 and 1979. But ever since, there's been a huge disconnect that's one of the major contributors, I'd argue, to dramatically higher inequality, a gutting of the middle class, and increasing political polarization.

As you can see in this chart from a study by the Economic Policy Institute, productivity more than doubled from 1948 to 1979 – as did compensation – but since then, compensation has only risen 13.7%, far less than the 59.7% increase in productivity: 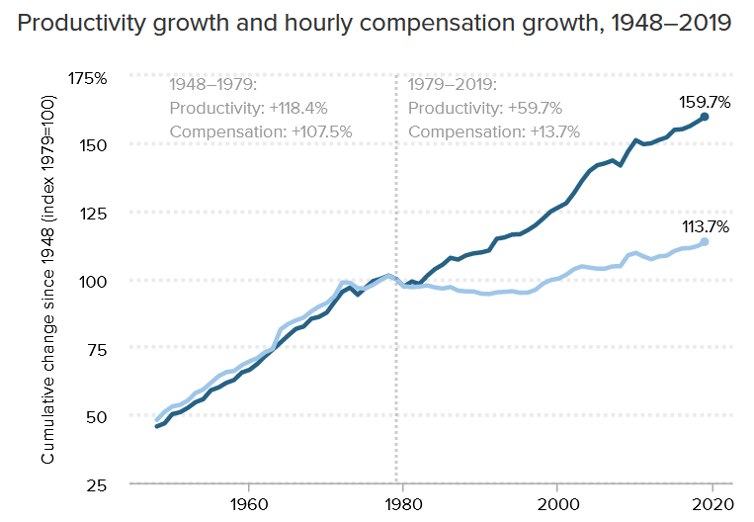 Of course, if wages really take off, we could end up with a 1970s-type wage-price spiral, which would be bad for stocks. But I don't think this is likely because the factors leading to higher wages are mostly short term. In contrast, the long-term trends keeping wage growth low, such as a decline in unionization and the ability of companies to move production to low-cost countries, are still intact...

Going beyond the inflation headlines. Excerpt:

In other words, it seems to be the pandemic skew in demand, not excessive spending across the board, that's driving current inflation.

Once you realize this, it has major implications both for our understanding of the recent past and for future policy.

First, because inflation reflects the huge surge in demand for durable goods, not the much slower growth in overall demand, a smaller Biden spending plan wouldn't have made much difference. Even if demand had been a point or two lower, the rush to buy stuff as opposed to services would still have overwhelmed our logistical capacity.

How Softies Seized the Fed. Excerpt:

This, in turn, means that while everyone is talking about inflation risks right now, the Fed is also concerned about the risks of overreacting to inflation. If it raises interest rates and that pushes the economy into a recession, it might not be able to cut rates enough to get us out again.

So if you ask why monetary doves rule the Fed roost, it's not just a matter of personalities – or ideology. The past couple of decades have highlighted the downsides of hawkishness, and the Fed doesn't want to repeat what it now, quietly, views as past mistakes.