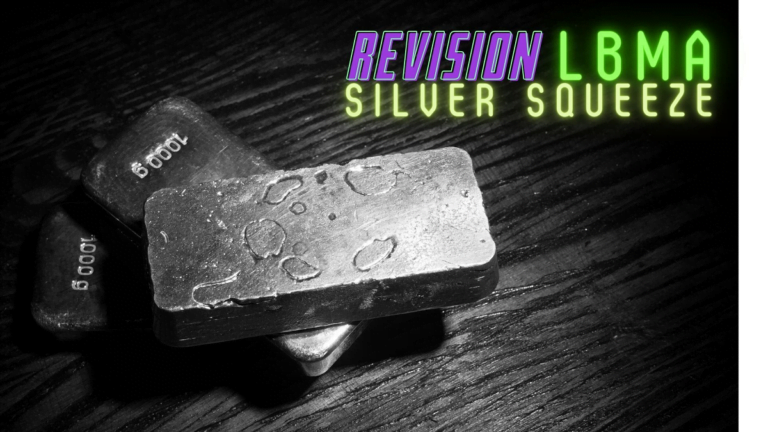 If you pay attention to the LBMA’s monthly publication of its supply, you will find information about its gold and silver holdings. However, the LBMA March silver supply previously indicated a record stock of silver in its London vaults. Actually, this number is entirely incorrect, and you can only find the revision in a footnote on the LBMA’s website. 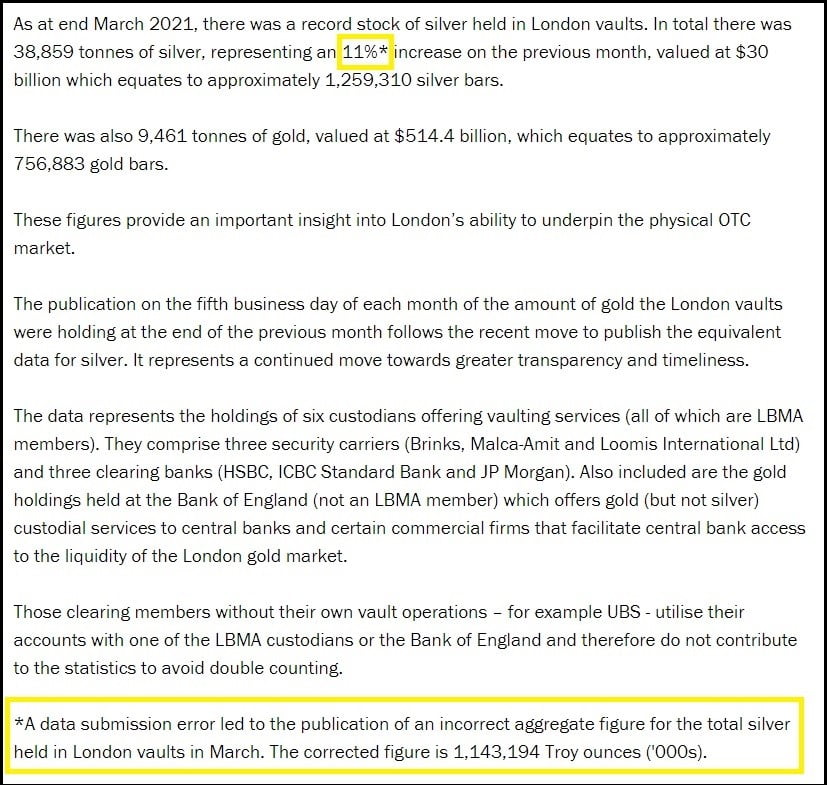 What is the LBMA?

To review, the London Bullion Market Association is an organization that the Bank of England loosely oversees. The LBMA is in charge of handling the Over-the-Counter market for precious metals futures contracts. They also define what makes bullion “Good Delivery.” Anytime someone invests in a futures contract, even through the NYMEX/COMEX or Tokyo Commodity Exchange, they trade based on the LBMA price.

The futures market is often used as a hedge to “mitigate price risk” (according to Investopedia), and the majority of futures are never delivered. Instead, these contracts roll over monthly, sometimes indefinitely as long as the investor does not want to accept delivery. As a matter of fact, less than 1% of the trades actually are delivered. Instead, these precious metals are stored in London’s LBMA vaults.

What Happened to the LBMA March Silver Supply?

In March, the LBMA claimed to have a record amount of silver in their inventories. However, this report was a false claim. To the novice investor, this mistake might not seem like a big deal. However, the LBMA waited an entire month before deciding to revise this incredible error.

Specifically, the LBMA claimed there was an 11% increase in comparison to February. This 11% represents about $30 billion or 1,259,310 silver bars. However, the LBMA March silver supply number was off—by a lot. In reality, the LBMA only saw the addition of 561 tonnes, not 3,863 tonnes. This is 6.88 times less than the previous statement, shifting from an 11% increase to merely 1.6%.

Also, they somehow counted an extra 3,300 tonnes, which is about 96,251,100 troy oz. This does not seem like a simple error, and critics speculate that this was all an unsurprising ruse. This could be enough for a Class Action Lawsuit against the LBMA since these false numbers potentially affected investors who have futures contracts through the LBMA.

#SilverSqueeze and the LBMA

When the LBMA March silver supply numbers came out on the fifth day of April, many people remained suspicious of the “record amount of silver.” This was also strange considering the fact that the US Mint was having difficulties meeting the demand for physical bullion. This is one of the largest mints in the world, and it was not the only one facing high demand. The Perth Mint as well has been under pressure and even had to release a statement in March as investors feared they ran out of supply.  Additionally, bullion dealers sported banners on their websites about how high demand meant orders could be delayed up to 10 business days. Somehow, the LBMA did not have this issue amid the growing #SilverSqueeze.

This is a significant error in reporting, and the LBMA remains vague on where this mistake occurred. There are six vault operators in the LBMA London vault network, and the LBMA is yet to pin the blame to any of them. The three banks that run the LBMA are JP Morgan, HSBC, and ICBC Standard Bank. Then, there are three security vaulters: Brinks, Malca Amit, and Loomis.

What is the Silver Raid?

The #SilverSqueeze Movement or Silver Raid is an attempt to corner the physical silver market and buy up as much supply as possible. The point of this for individual investors is to follow in the footsteps of others who once attacked silver. This includes the Hunt Brothers from 1980 and Warren Buffett in 1997.

Both of these parties previously cornered the market, driving up the price of silver to an inflation-adjusted level. The subforum on Reddit aims to redo these events. Instead of one person, however, it is a movement of approximately 78,200 people. They are motivated by making major industry players, like the LBMA, suffer.

Why? Because they believe the precious metals market is heavily manipulated by the members of the LBMA. Their recent, significant error bolsters this suspicion for many.

Here is a chart representing the investments in silver from the past 10 years. 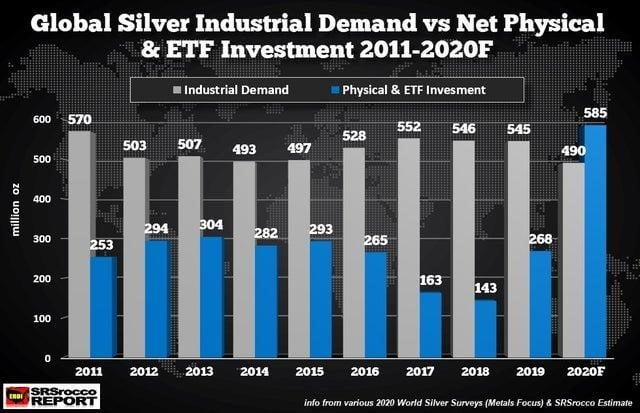 Reddit aims to have one billion ounces of silver purchased in 2021. According to their numbers, not published in this chart, the global silver community already bought 500 million ounces by the end of April. The biggest strength on their side is the fact that the annual mined supply of silver has been falling for the past few years. Simply put, if supply cannot keep up with demand, the silver price will skyrocket. So far, the total supply and demand are neck and neck in 2021. 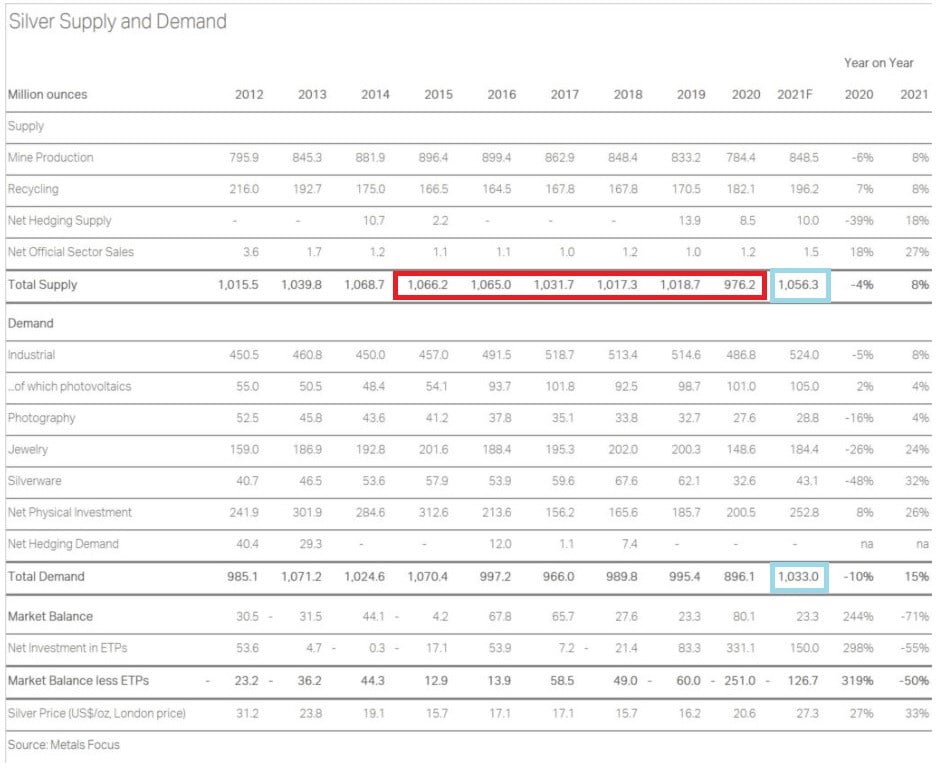 And now we circle back to the lie about the LBMA March silver supply. Critics indicated that it is interesting timing for the LBMA to have made such an error. He speculated that the LBMA was lying in order to prevent panic in the market. If that is the case, and this was really not an error of overcalculating an extra 96,251,100 troy oz of silver, how long can the LBMA maintain this narrative?