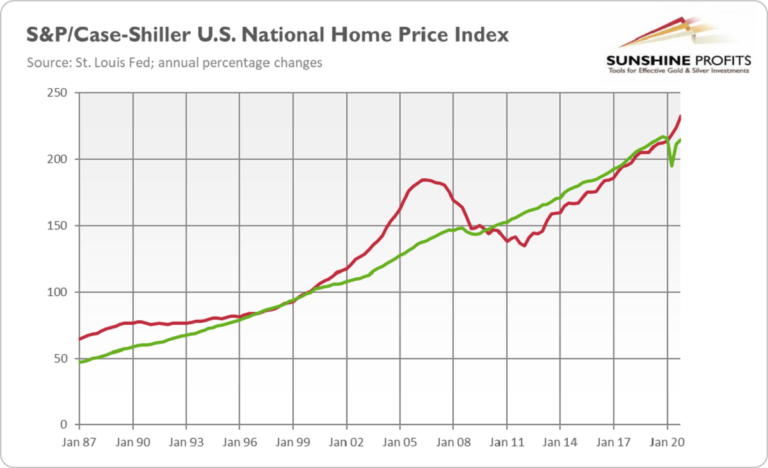 Home prices are surging, making some investors worry about the housing market. These fears seem to be exaggerated, but bubble-like conditions are widespread.

House prices are surging. As the chart below shows, the S&P/Case-Shiller U.S. National Home Price Index has reached 239 in February 2021, the highest number in history and about 30% higher than during the 2006 peak. 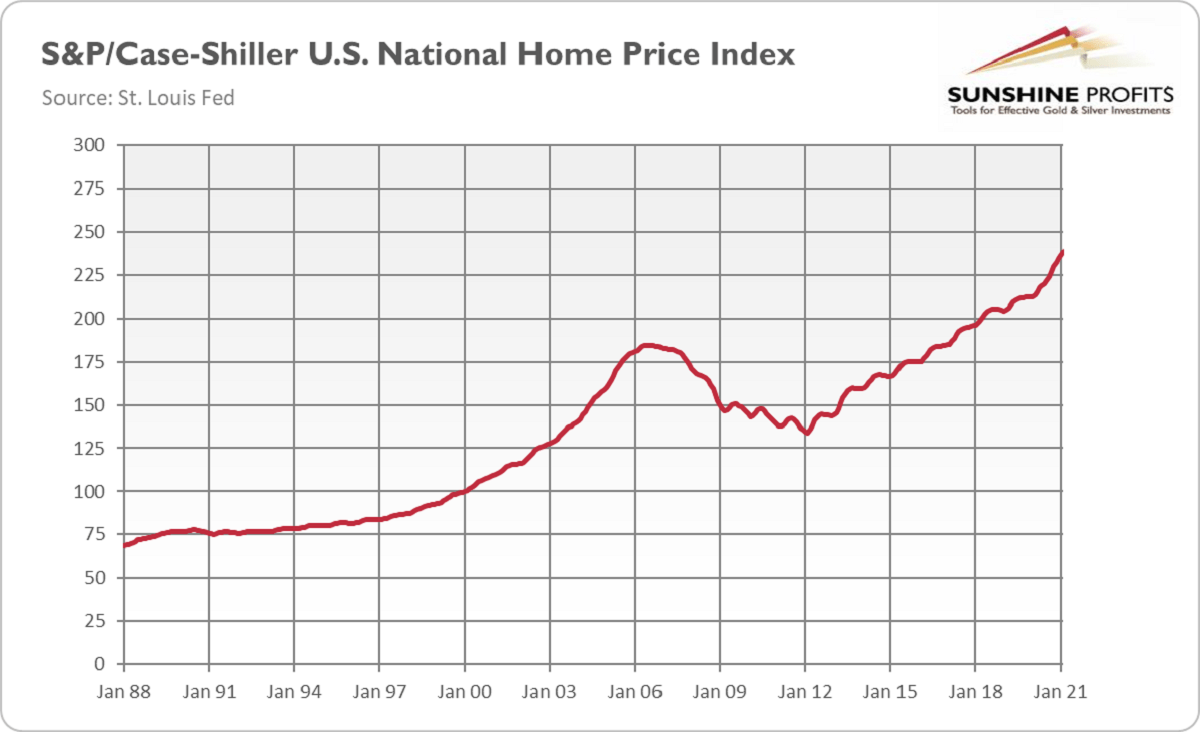 What’s more, the National Home Price Index has jumped 12% year-over-year in February , which is the highest annualized gain since January 2006 when the housing bubble started deflating as can be seen in the chart below. At the same time, inventory in many regions has hit record lows. 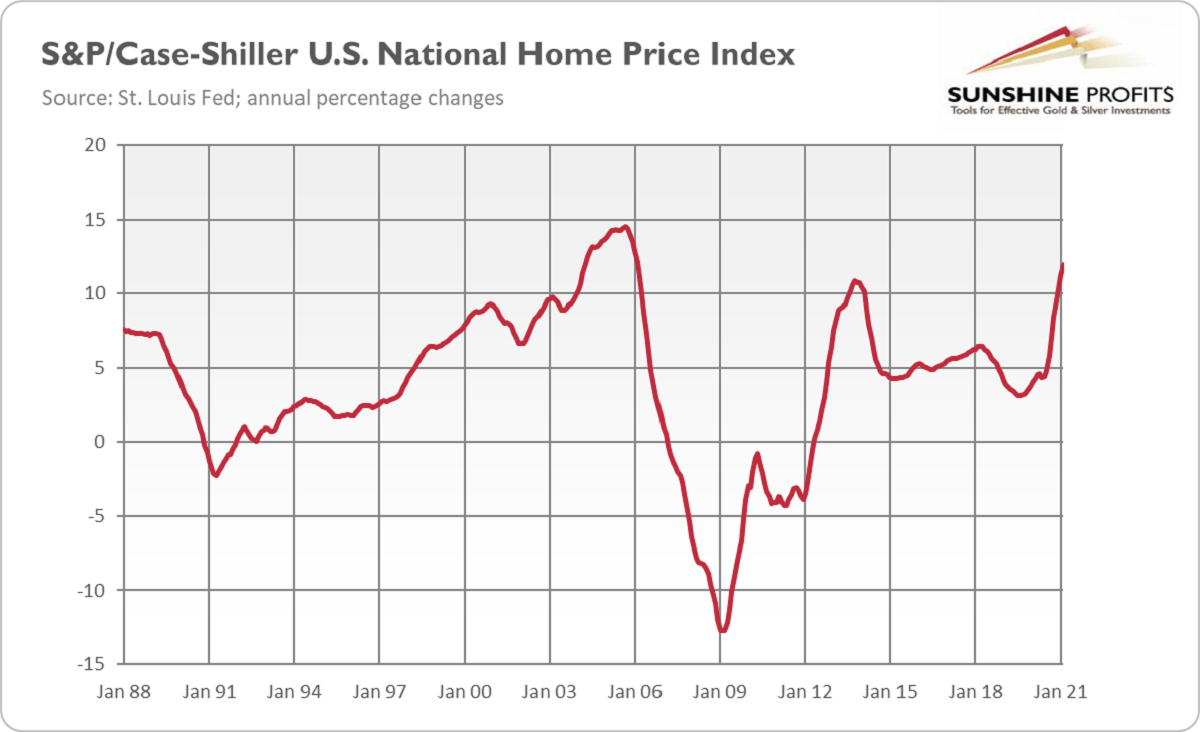 The Formation Of The Next Housing Bubble

Not surprisingly, some analysts started to worry about the formation of the next housing bubble. The previous one led to the global financial crisis . However, at least some part of the recent increases can be explained by other factors than mere expectations of price increases, which characterizes a bubble.

The mortgage rates plunged thanks to the Fed’s zero-interest-rate policy and accommodative monetary policy . The easy fiscal policy with stimulus checks also added fuel to the fire, especially given that people couldn’t spend money on services, so they spent more on housing.

The demographic factors also helped to move prices up. Many Millennials have just entered the prime home-buying age, and the pandemic made a lot of people demand more space as they work remotely.

In other words, the recent surge in prices is likely a result of an imbalance between tight supply (that rises too slowly to meet booming demand fueled by low interest rates ) and income growth rather than an irrational exuberance. Furthermore, lending standards are also tighter now. Please take a look at the chart below, which shows the home price index vis-à-vis the GDP (presented also as an index). 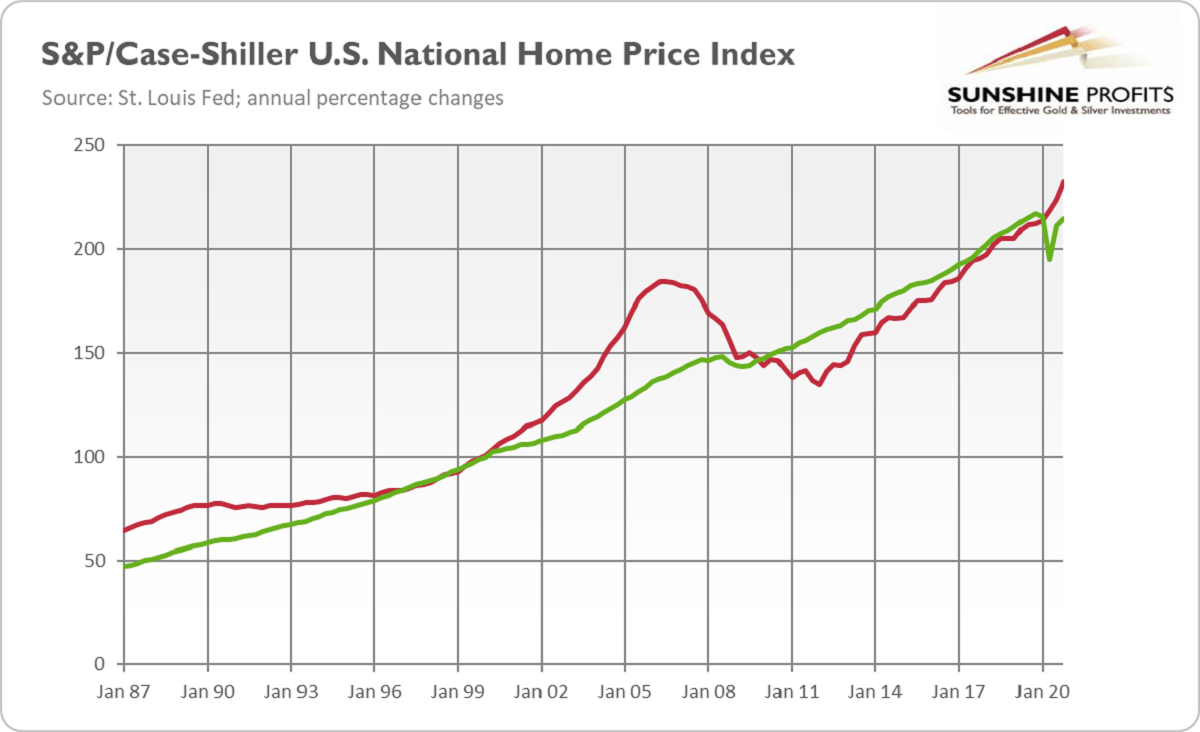 As one can see, in the 2000s there was a clear, huge divergence between the pace of GDP growth and the pace of home prices’ appreciation that lasted a few years before the bubble burst. But since the end of the Great Recession , the growth in house prices was below the GDP growth. Therefore, I would say that there is no bubble in the housing market. Not yet, at least – house prices started to diverge from GDP growth during the pandemic recession …

Hence, it would be smart to monitor the housing market carefully. However, so far, gold bulls shouldn’t count on the housing bubble and its burst as important factor that could support the price of the yellow metal. Nevertheless, the recent ultra-low real interest rates and high inflation should support both: gold and houses . After all, they are both hard assets sensitive to interest rates and are being eagerly bought during inflationary periods.

More importantly, despite the fact that it’s maybe too early to call the national bubble in the housing market (although some locations are really hot), in many markets there are bubble-like conditions. Just think about soaring stock market indices reaching one record after another. Or negative-yielding bonds worth about $18 trillion. Or surging used car prices that have just hit an all-time high. Or lumber that has become America’s hottest commodity.

The widespread character of these price increases is the reason why some analysts refer to the “everything bubble”. It might be an exaggeration, but the scope of bubble-like conditions clearly shows that markets are awash in liquidity. All this new money supply and excess liquidity simply entered the economy, exerting inflationary pressure across the board and boosting mainly risk assets.

Indeed, there is inflation, but still mainly in the asset markets, not in the consumer sphere. However, this is changing, as the April CPI reading has clearly indicated. Producer/commodity inflation could advance into the next stage in which consumer prices are also generally increasing. Inflated asset valuations and rising prices of goods suggest that caution is warranted, and it would be smart to allocate some portion of the investment portfolio toward gold.

The bottom line is that the global expansion will continue, which is bad for gold. However, the growth is fueled by excessive liquidity and ultra-low interest rates, which also creates inflationary pressure and bubble-like conditions. Gold could be supported by all this – it may even thrive if inflation turns out to be higher and more lasting than it’s widely believed.