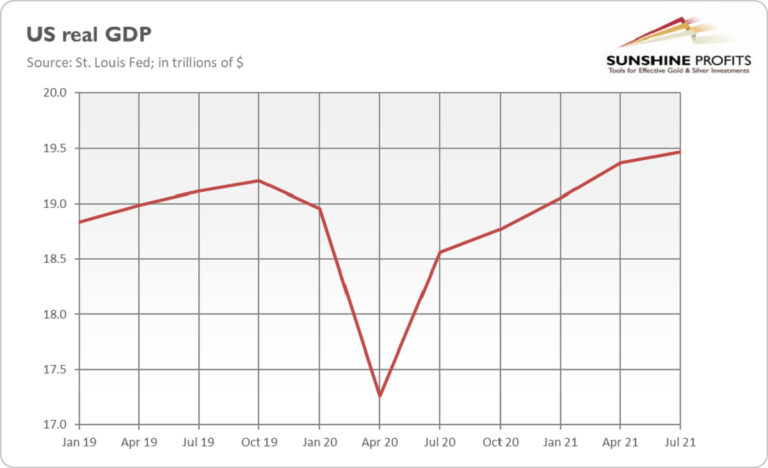 My outlook for the gold market in 2022 suffers from manic depression: I see first a period of despair and an elevated mood later.

Expectations For Gold This Year

Seriously, what can we expect from this year? I see a few key trends that are going to shape 2022, and their names are: Death, Famine, Pestilence, and War. Oh, sorry, the wrong list! At least I hope so… I meant, of course: economic recovery, inflation, and the Fed’s tightening cycle. Let’s examine them in detail.

First, there will be the end of the pandemic (or, actually, its most acute phase) and a return to normal economic conditions. In some aspects, such as the GDP, the economy has already recovered from the 2020 economic crisis (as the chart below shows). However, broad population immunity and new drugs will limit the economic impact of coronavirus (the virus won’t disappear and will become endemic) in the future. What’s more, the global economy is likely to solve most of the supply problems that emerged last year (although not immediately). The return to normalcy should support risk appetite while hitting the safe-haven assets such as gold. 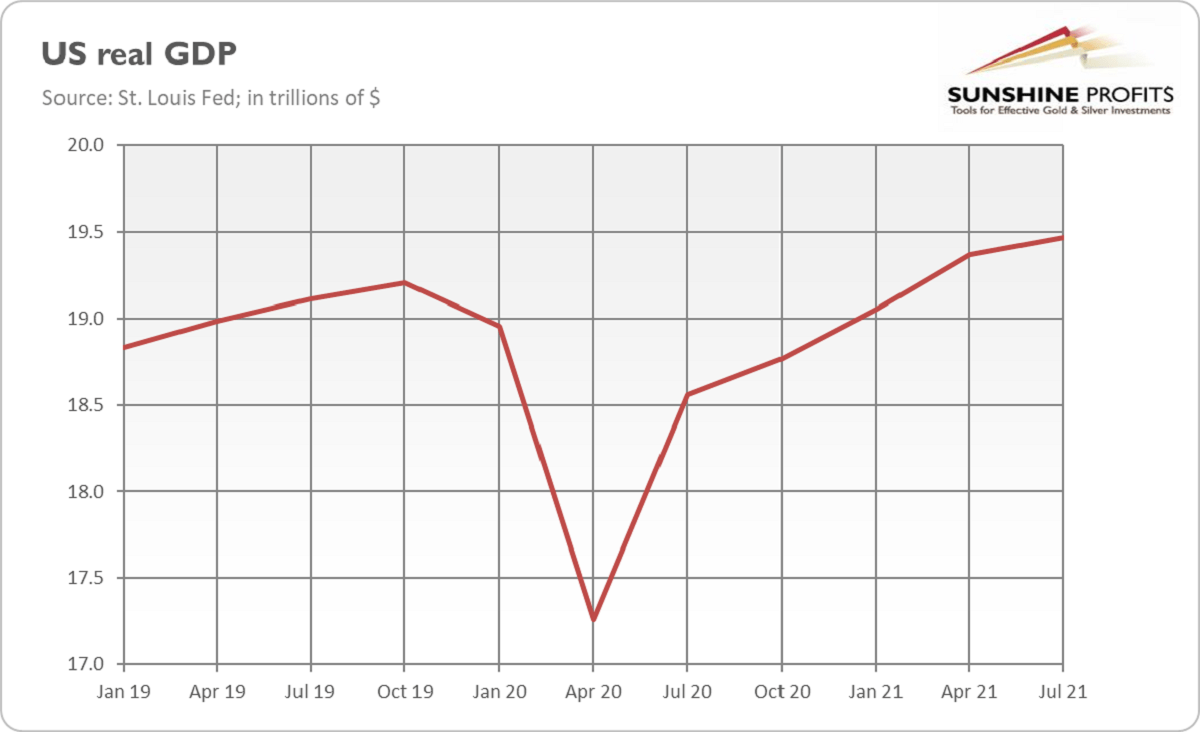 To be clear, I do expect a further deceleration in the pace of economic growth, but it should remain positive or even above the trend. In other words, although inflation will stay elevated, I don’t see stagflation coming in 2022. It means that the most favorable scenario for the gold bulls won’t materialize.

Second, inflation is likely to peak somewhere in the first half of this year to get down later. To be clear, inflation won’t disappear on its own; its taming will depend on resolving supply problems and, even more, on appropriately hawkish actions from the Fed. You see, inflation results mainly from the surge in the broad money supply that boosted demand much above the supply. Although fixed bottlenecks will help to ease pressure on the supply, they won’t erase all the newly created money that entered the economy last year. Inflation is, thus, likely to stay elevated in 2022 as well. Inflationary pressure should support gold prices. However, when inflation peaks and disinflation sets in, demand for gold as an inflation hedge will drop.

Third, the Fed will turn more hawkish. Powell has already admitted that the narrative about transitory inflation should be abandoned. Thus, it seems that the US central bank finally understood that it had to react to rising inflation, so it already accelerated the pace of tapering of quantitative easing. Hence, in 2022, the Fed will end its asset purchases and start raising the federal funds rate. The prospects of the Fed’s tightening cycle will put downward pressure on gold, just as they did last year.

Gold Is Likely To Struggle

Let’s sum up. The economy should normalize and grow further next year, while inflation should reach its peak. Both monetary and fiscal policies will become tighter. In particular, the Fed will hike interest rates, probably twice, or even three times. In consequence, the US dollar should strengthen, especially given the ECB’s dovish stance, while bond yields should increase. Indeed, a more hawkish monetary policy combined with inflation reaching a plateau implies rising real interest rates. Holy Krugerrand, it does not sound like a dreamland for gold! Actually, gold is likely to struggle, and we could see an important slide in prices.

However, the bullish case is not doomed. First, inflation could be more persistent than we all think, so it could peak rather later than sooner this year. Stubbornly high inflation would keep real interest rates deeply in negative territory, which should support gold prices.

Second, economic growth could also surprise us negatively. I mean here, for example, the fact that the unemployment rate seems to be close to its bottom (as the chart below shows), so the room for further improvements seems to be limited. Elevated inflation, supply problems, and the Fed’s tightening cycle increase the odds of the next financial crisis or even a recession. However, it’s rather a matter of a future beyond 2022. 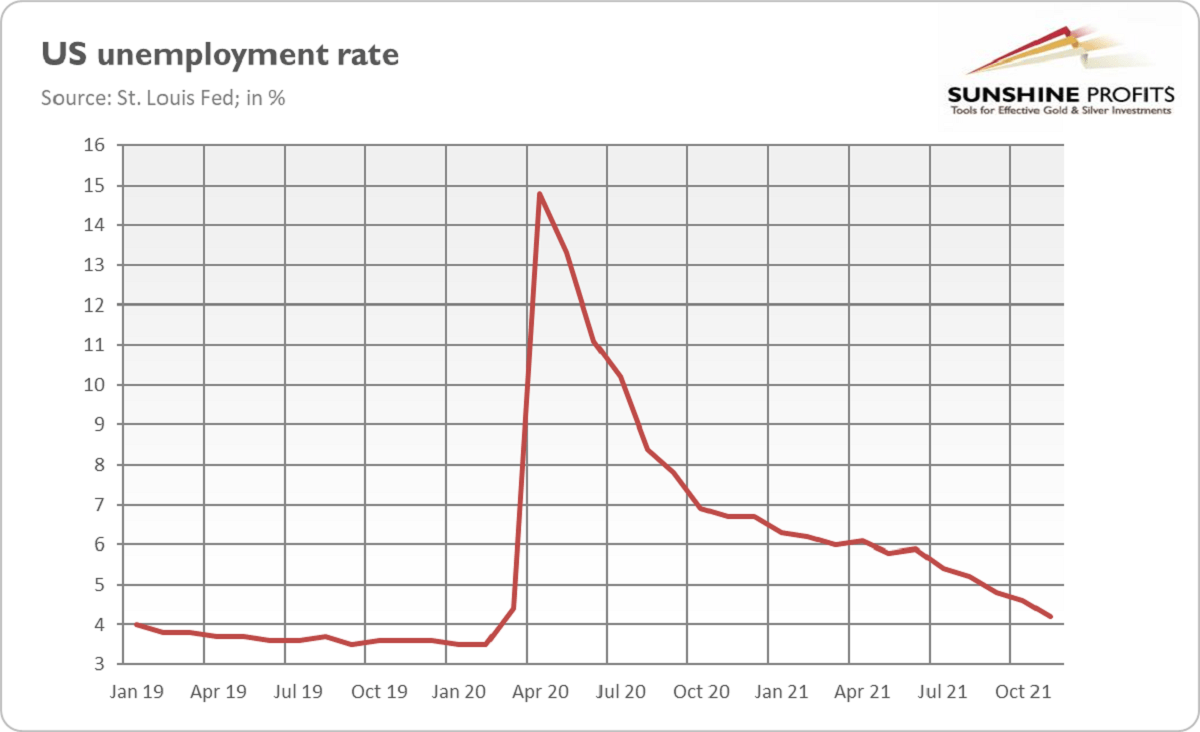 Third, gold reached its bottom in December 2015 when the Fed hiked interest rates for the first time since the Great Recession. Thus, if this history replays, the actual beginning of the Fed’s tightening cycle could, in fact, be positive for gold prices, contrary to prospects of hikes.

Hence, my baseline scenario for this year is that gold will struggle in the first months of the year and slide to the bottom around the Fed’s first hike, which will occur sometime in the spring. The main downside risk is that this year’s tightening cycle will be worse for gold than in 2015-2019, while the major upside risk is that inflation worries will strengthen or even dominate the marketplace.