ValueWalk
Home Business Eurizon The Globe: How Near Is The Inflation Peak?

The latest issue of ‘The Globe’, Eurizon’s publication describing the Company’s investment view. In this issue, a focus is dedicated to “How near is the inflation peak?”.

March data confirmed that inflation is still rising, although in the United States there are signals that it may be peaking. Therefore, easing process will be slow, also in light of the new lockdowns in China and of persistently high commodity prices due to the Russia-Ukraine war.

Monetary restriction is still the priority for the Central Banks. In May, the Fed could hike rates by 50 basis points. Fed funds futures are pricing in a policy rate of 3.5% in mid-2023, higher than the 2.8% target laid out by the Fed. As regards the ECB, the market is pricing in three rate hikes the 2H 2022.

The bond yield curves, in the US in particular, are already pricing in the future moves of the Central Banks. The swift increase of bond rates took place in a more moderate context of equity volatility than in past phases. This relatively calm picture seems to indicate that the markets trust in the Fed’s ability to contain inflation without overly damaging economic growth.

For this to assumption to be confirmed, forthcoming data need to certify the inflation peak. In the immediate term, however, uncertainty may remain high, and the risk of concerns mounting over the resilience of global growth cannot be ruled out.

Recovery still on track according to the baseline scenario, although the Fed’s policy tightening, combined with persistently high commodity prices, may extend the uncertainty phase. Low directionality approach confirmed, neutral view on duration and stocks. 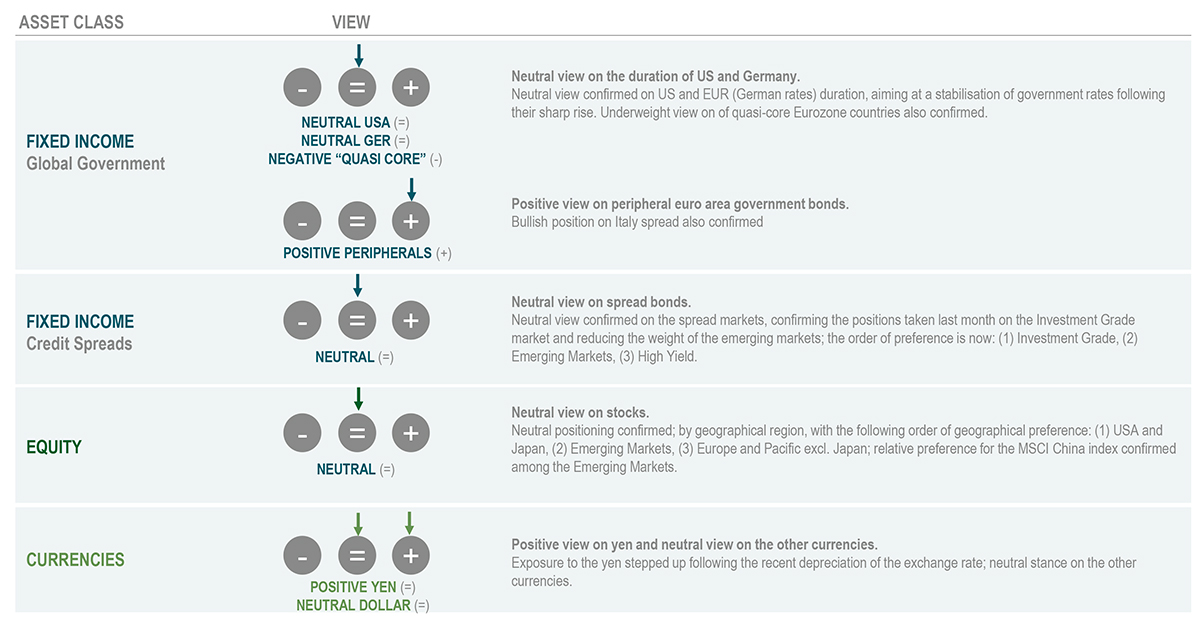 Government bond rates are still rising across the board, with the US curve at its flattest ever. Spreads widening in Italy’s case, tightening slightly for Investment Grade, High Yield and emerging country bonds. Stock markets still volatile, but stable overall in the month. 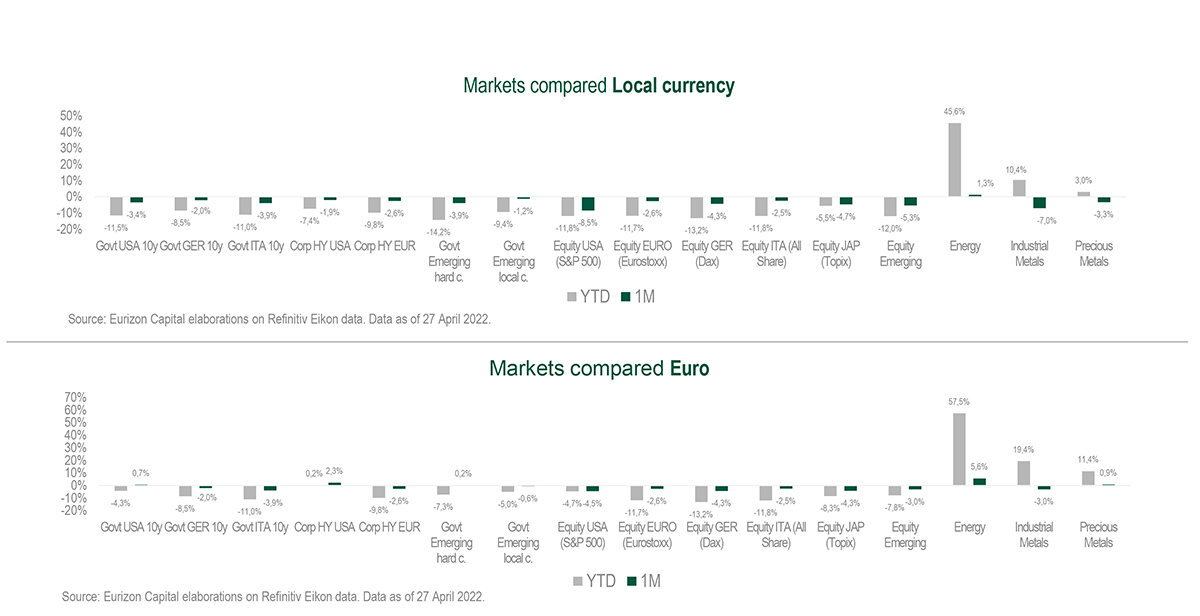 Theme Of The Month: How Near Is The Inflation Peak?

Flaring inflation, that does not seem to be at an end, is fuelledby three components: excess demand built up in 2021, the self-multiplying effects via the wage trend, already apparent in the US and, more recently, the energy crisis, amplified by the Russia-Ukraine war.

In the United States, the core inflation reading for March fell short of expectations, strengthening the view that present inflation levels could represent a peak. This view is supported by a couple of considerations. Commodity prices have risen significantly but stopped doing so at the beginning of March. For what concerns the self-multiplying effects via the wage trend, the issue is being taken on by the Fed with a progressively more restrictive monetary policy, at the risk of sacrificing some economic growth.

As regards excess demand in 2021, the resulting supply-side bottlenecks are being resolved, but very slowly. This may be the key variable to keep under watch, also in light of the new lockdowns in China.

On this front, four indicators should be taken into account and monitored. The first is the cost of shipping containers from China. Container shipping rates have been on the decline since the beginning of the year but are still at levels close to the historical highs marked at the end of 2021. While no additional inflation is coming from this side, tensions are not clearly easing, either.

The second indicator is the Freightos Baltic Index,that measures shipping rates on 12 global commercial routes, which is proving consistent. Tensions seem to be progressively easing. Maritime shipping rates are on the decline from the levels recorded at the end of 2021, but well above pre-Covid standards.

The third indicator to consider is the flow of rail freight in the United States. After plunging in mid-2020, activity has almost returned to pre-Covidlevels (2019), signallingthat distribution chain hitches have been overcome. However, a return to normal has been achieved only in part, as the transport of oil and vehicles, two of the segments that have supported inflation, is still below 2019 levels, signallingpersistent shortages in these key sectors.

Lastly,the fourth indicator of choice is an overview of United States production as a whole. The gap between back orders and warehouse inventories is closing from post-reopening peaks, but the balance still leans towards the orders side, while stocks of finished products remain at compressed levels. In essence,pressures on the supply chain have not yet eased.

Overall, we find it legitimate to share the view that US inflation is peaking. However, indications are that the reduction of inflation pressures will be slow, especially in light of the new lockdowns in China.