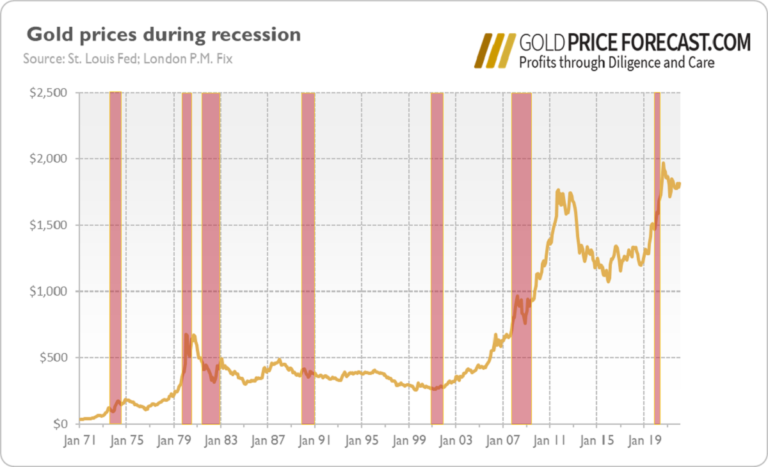 Recession has already occurred or is on its way.. Somebody should tell gold about it!

Is a recession really coming? We already know that the yield curve inverted last month for the second time this year, but what are other indicators of looming economic troubles? Well, let’s start with GDP. According to the initial measure of the Bureau of Economic Analysis, real GDP dropped 0.9% in the second quarter, following the 1.6% decline in the first quarter (annualized quarterly rates). On a quarterly basis, real GDP decreased by 0.4 and 0.2 percent, respectively. Hence, the American economy recorded two quarters of negative growth, which implies a technical recession. 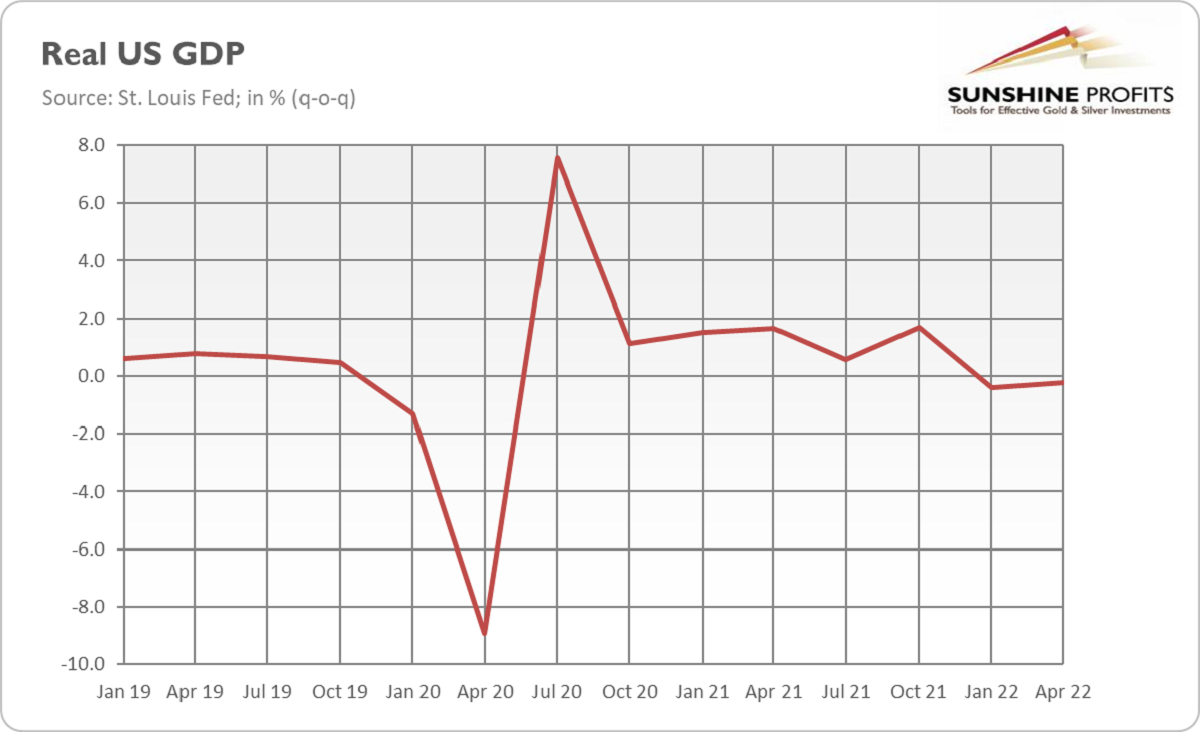 Second, the New York Fed’s DSGE Model became pessimistic in June, as it predicted modestly negative GDP growth in both 2022 (-0.6%) and 2023 (-0.5%). According to the model, the probability of a soft landing is only 10%, while the probability of hard landing—defined to include at least one quarter in the next ten in which four-quarter GDP growth dips below -1 percent—are about 80 percent. When the Fed’s own models predicts recession, you can be sure that the situation is serious!

Third, money supply growth has slowed down significantly in recent months. As the chart below shows, the growth rate declined from the peak of 26.9% in February 2021 to 5.9% in June 2022. This is a significant shift, because money supply tends to grow quickly during economic booms and slow before recessions, as banks "slam on the brakes" on money creation. 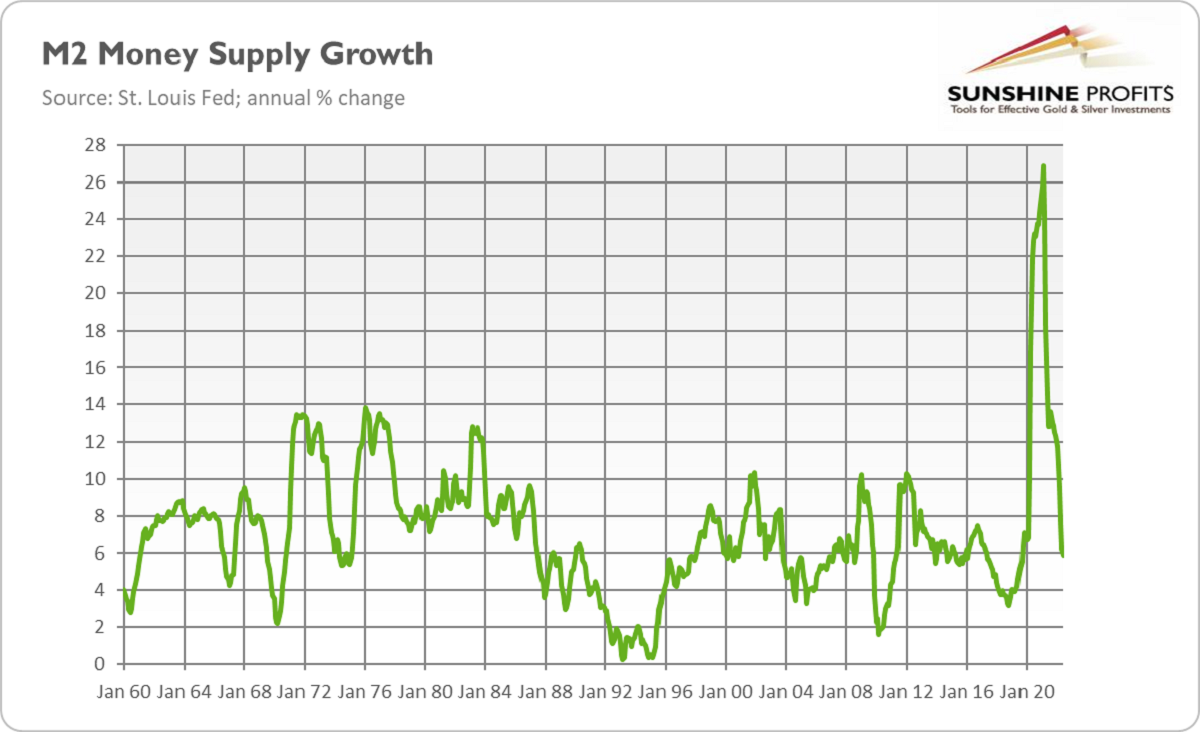 That’s not all! The S&P 500 has entered a bear market, while credit spreads have widened significantly. Financing costs for “junk” companies have almost doubled this year. Residential investment plunged 14% in Q2 2022, the largest decline in 12 years (excluding the pandemic era), and the housing market in general is suffering right now. The auto bubble is showing signs of bursting, and banks are already leasing more land to handle the expected surge in repossessed used cars. Business confidence and consumer sentiment are very low. Commodity prices (like copper) have plunged recently, and rising inventories at retailers could also foreshadow upcoming economic weakness.

Of course, not all the data points to a recession. In particular, the unemployment rate is still very low and the labor market remains tight. The problem is that the unemployment rate is a lagging indicator, as people start to lose jobs only when the economy has already begun declining. However, as the chart below shows, the unemployment rate hasn’t changed since March 2022, when it reached 3.6%. It suggests that it has found its bottom and may be ready to go up after a while. Moreover, jobless claims have risen from 166,000 on March 19 to 244,000 on July 9, which may herald upcoming problems. If we could have a jobless recovery from the 2001 recession, why couldn’t we have a jobful recession, at least in theory? 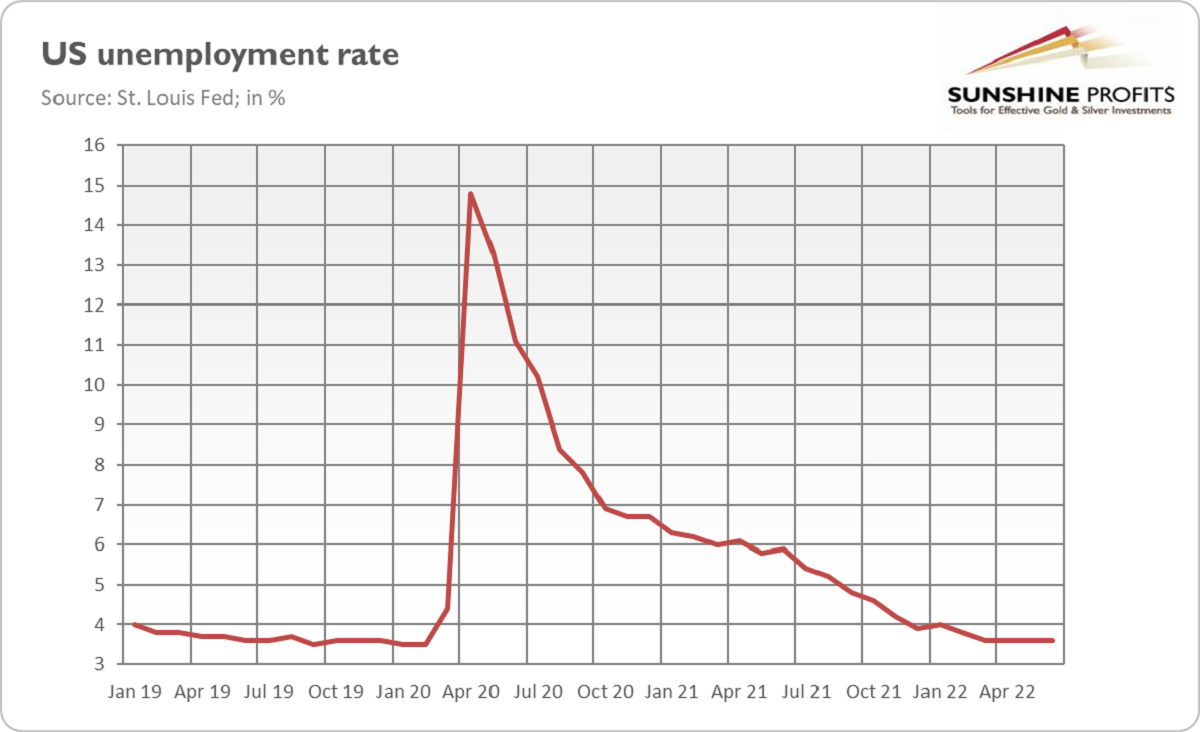 The second popular counterargument is that consumer spending remains healthy. This is true, but it shows some signs of slowing as inflation hits Americans’ budgets. In particular, real spending, adjusted for inflation, shows a less optimistic picture, as the chart below presents. Generally speaking, pointing at high spending during inflation doesn’t make sense, as this is exactly why we have inflation – newly created money by the Fed and commercial banks goes to people who are spending it. Moreover, during high inflation, spending money on goods and services is a reasonable course of action because it’s better to have some tangible assets than money, which is losing purchasing power each month. 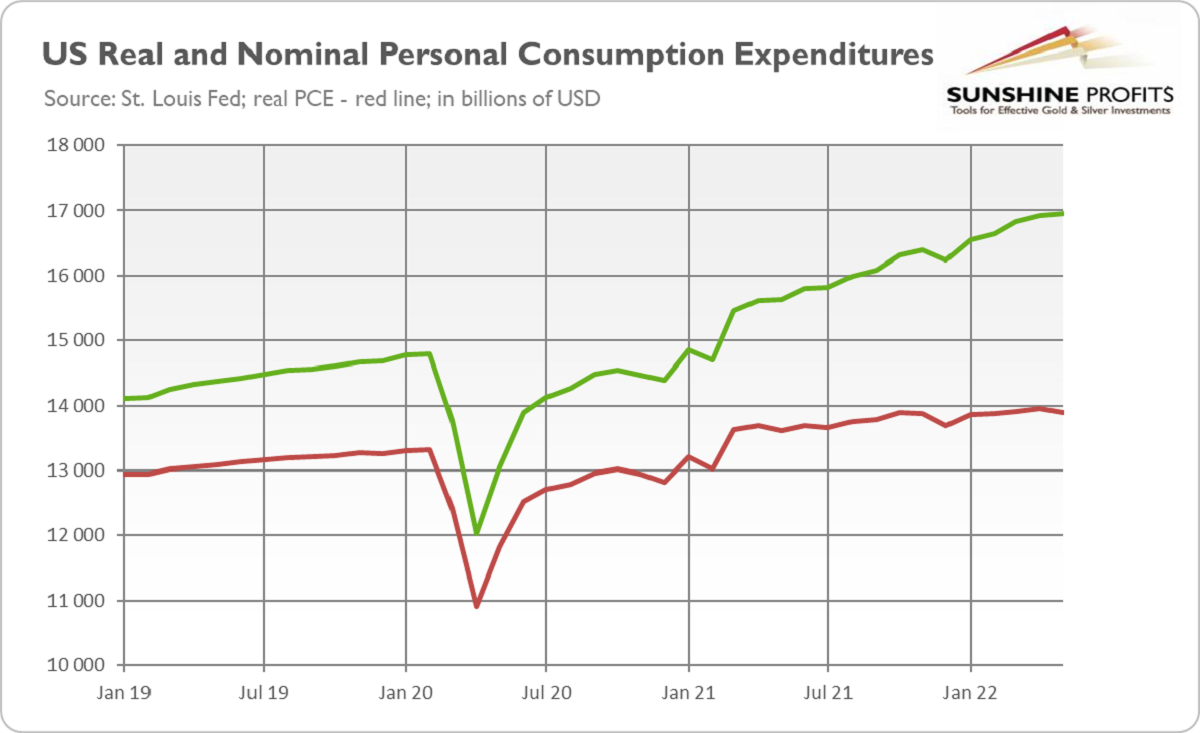 More generally, inflation has become so persistent that only a serious monetary policy tightening could bring it back to the Fed’s target of 2%. Actually, inflation is so high that it could trigger a recession on its own, as it seriously disrupts economic life. The problem here is that there is so much private and public debt that the aggressive interest rate hikes – needed to combat inflation – could burst asset bubbles and trigger a debt crisis.

What does it all mean for the gold market? Well, for me, the case is clear. We are either already in a recession or heading toward one. Given that gold is a safe-haven asset, a recession should be positive for its prices. As the chart below shows, gold usually rallies during economic downturns – and this has been the case in the past three recessions. 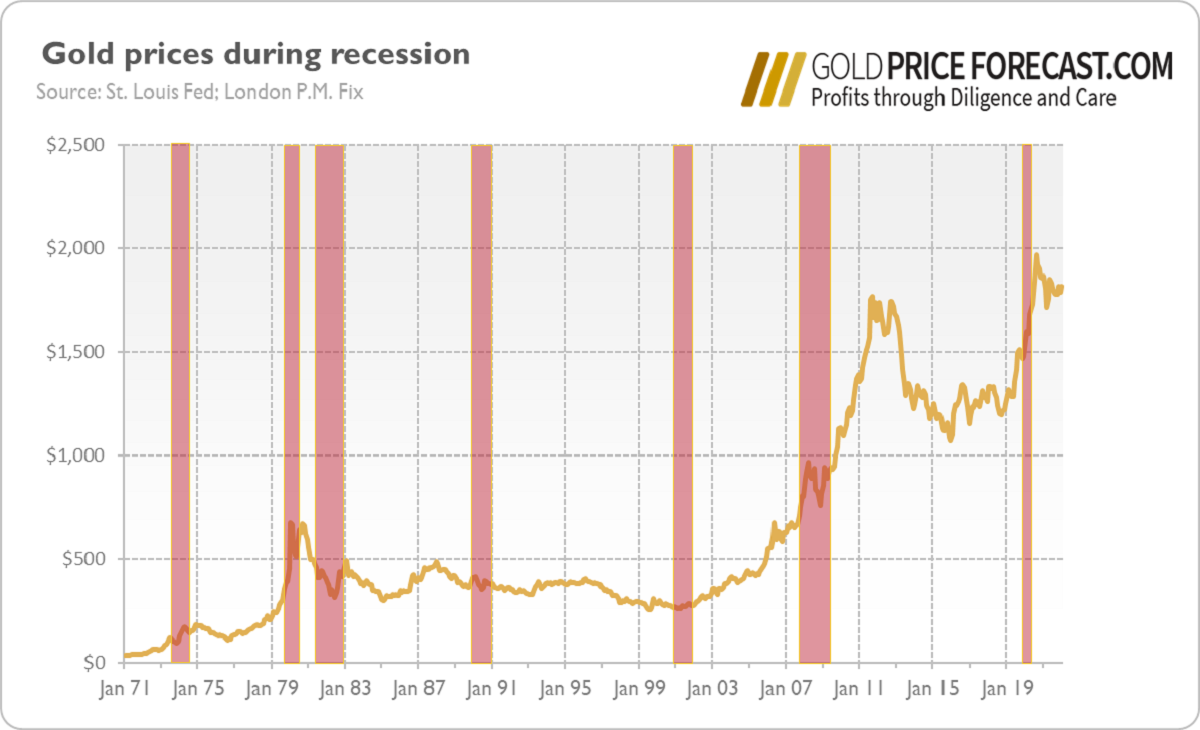 However, this relationship is not set in stone. The double-dip recession of the early 1980s was bearish for gold. The yellow metal soared during stagflation, but when Volcker hiked interest rates to combat inflation, it plunged, despite the fact that the Fed’s tightening cycle triggered recession. Hence, if the inflation rate goes down, real interest rates could increase further, putting downward pressure on gold. However, a recession is likely to be accompanied by a dovish Fed and declining bond yields, which should support gold.